The curly-haired manchild is back! And this time there’s added The Funny One From The Hangover so this has to be the funniest comedy ever, right? Or at least the most low-brow. Hmm... or maybe just something in between those two? Yes, that’s it. That’s exactly what we have here.


With the United States presidential election coming up, what better time to make a film about two feuding candidates fighting to become congressman? And while the result can’t live up to some of the more ridiculous incidents in Mitt Romney’s absurd history of fails, this film thankfully contributes to the better half of Will Ferrell’s recent hit-and-miss career. But as ever with these kinds of high-concept, largely improvised Frat Pack movies, the bigger laughs come from the exaggerated character performances rather than anything written in the script.

Curiously, the plot is driven by the tantalising pairing of John Lithgow and Dan Akroyd as powerful sibling duo The Motch Brothers. With current Democratic Congressman Cam Brady (Ferrell) embarrassing himself with a sex message scandal, the pair decide to back small-town, naive Republican candidate Marty Huggins (Galifianakis) in order to persuade him to let them profit from illegal business with Chinese companies. There ensues a bitter campaigning battle between the two hopefuls that quickly develops into an out-of-control contest of one-upmanship. 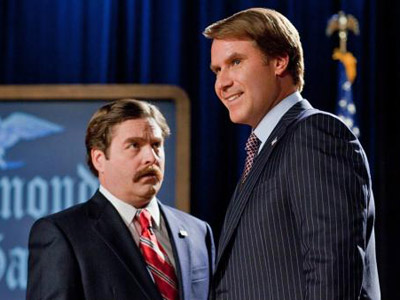 Ferrell wins this round.


If you look at the film from really, really far away, it just about passes as a satire of US electoral proceedings (from really far away). Also, anyone familiar with the real-life Koch brothers and their supposed string-pulling behind powerful doors won’t have to look far to spot the inspiration for Lithgow and Akroyd’s characters. And yet, intelligent indictments of American politics and high-level power struggles are not the order of the day. This film is about silly voices and crude sex gags and jokes about children touching an old alcoholic’s man boobs. Thank god.

While Akroyd and Lithgow go sadly missing for almost all of the film, Jason Sudeikis has some choice moments as Ferrell’s right-hand man trying to put a positive spin on his scandalous antics, and Dylan McDermott gives a one-note performance as the tough campaign manager hired to whip Galifianakis into campaigning shape. But it is clearly a two-man show and neither funnyman outshines the other in what becomes string of increasingly outrageous scenarios.

With southern drawls ringing throughout, Galifianakis piles on the camp with his childlike candidate who slowly becomes a cynical player in the political race while Ferrell puts on a familiar rock star performance that we’ve seen from him plenty of times before: that fast-living blend of arrogance and ignorance. The contrast between the two makes for a great comic mix throughout but, inevitably, some of the humour hits closer to the mark than other bits. 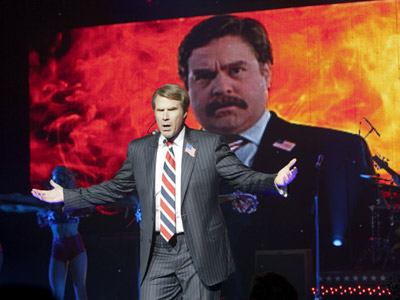 For the record, over-the-top rock star presentations are ALWAYS funny.


It obviously depends on your tolerance for the Ferrell brand of comedy, but scenes in which the cameras have obviously been left on for take after take of improvised nonsense (the best one to be decided at a later date) are the most fun, and a repeat joke involving first a baby and then America’s favourite dog, Uggie from The Artist, is a highlight both times.

And yet, when the competition between the two rivals gets out of hand, some lines are crossed that are hard for any comedy to pass off as ‘just another joke’. It’s one thing to frequently drop the F-bomb and push the boundaries of offensiveness, but sometimes the actions of Ferrell’s character in particular feel a little too near to the knuckle and it’s hard for the film to recover the overall feel-good comedy tone immediately afterward.

That said, with no interest in US politics or, really, in seeing the latest in a long line of Ferrell vehicles, The Campaign ended up being a pleasant surprise. Don’t get me wrong, you know what to expect already and probably already know if you want to see this film as a result, but for those of you who think this kind of comedy is starting to feel a little jaded, The Campaign may well convince you that there’s still more than a few laughs to be wrung out of this particular brand of humour yet.

More:  The Campaign  Will Ferrell  Zach Galifianakis  Jay Roach
Follow us on Twitter @The_Shiznit for more fun features, film reviews and occasional commentary on what the best type of crisps are.
We are using Patreon to cover our hosting fees. So please consider chucking a few digital pennies our way by clicking on this link. Thanks!