Talk about kicking a girl whilst she's down. Just moments after staring longingly at a younger version herself on the poster for The Princess Bride in the opening minutes of The Congress, Robin Wright is scolded by her agent (Harvey Keitel) for continually making lousy choices in her career as well as life, then by a studio head for having the audacity to get old. Clearly The Congress isn't afraid to make a difficult point, but its problem is that it wants to make so many of them.


Ari Folman's follow up to the impressive Waltz With Bashir is bold, daringly different and visually arresting, but it's also a bit too much. I've never been one to shy away from arthouse films – I've seen The Discreet Charm Of The Bourgeoisie, dontcha know (*slides glasses up nose, adjusts beret*) – but The Congress tries so hard to be so many things it becomes an effort to digest the many profound questions and themes it poses. All at once it's a satirical sci-fi, socio-political commentary and psychedelic trip-fest. Would a Disney-style sing-a-long explaining intellectual property and performance as art be too much to ask?

Facing a dwindling career now she's in her 40s and caring for a son with an unspecific degenerative illness, Wright negotiates a deal with her studio Miramount (yes, I know) to digitally scan her and own her image outright. Berated by studio boss Danny Huston ("I need Buttercup from Princess Bride, I need Jenny from Forrest Gump. I don't need YOU"), this version of Wright will appear in any film of his choosing and, more importantly, not age nor challenge these choices, like a good little 'synthespian'. Andy Serkis has a lot to answer for. 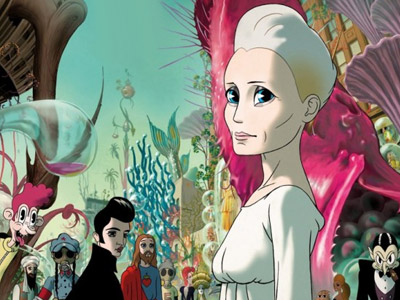 
Inexplicably leaping forward 20 years, we see Wright attending The Futurist Congress within the Animated Zone, a kind of hellish take on the Edinburgh TV Festival except everyone has to take psychotropic drugs in order to attend and become, err... animated. It's here in animated form (looking like "Cinderella on heroin", with big haunted eyes and a stick-thin figure), Wright tries to take on the new Hollywood system and find her estranged son, much to the chagrin of her animated bosses.

Here in the Animated Zone, you can be anyone you want, from Elizabeth Taylor's Cleopatra, a gorgeously pouty Elvis, or a sexy half-human-half-porpoise, as long as it doesn't challenge the status quo and you just keep imbibing and consuming. Jon Hamm pops up as a sad-eyed human version of Pepe Le Pew as Wright's 'illustrator', and there are some penis fish thrown in as well. Cue much chin-stroking as to what all this could mean. 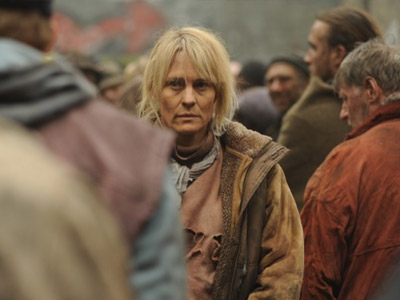 Get married to Sean Penn, they said.


The animation is pleasingly retro and colourful, beautiful yet disturbing and unsettling, but this portion is so completely disconnected from the real life introduction it could, or should, have been a film in itself. A magnificent scene early on in 'real life' where Wright has to display a variety of emotions whilst being scanned begs the question of why Folman would want to make such a point about the complexity of human emotion only to then animate his wildly talented actress for the majority of the film.

The tantalising glimpses of the real world show Folman is more than adept at tackling a live-action film, but his heavy-handed approach to condemning Hollywood (at one point a window is opened onto a factory line of writers churning out scripts), technology (is performance capture really so bad?) and the way actresses in particular are treated as commodities gives about as much insight as a Media Studies A Level essay. The concept is good, the visuals are dazzling and the supporting cast are great, but for all its impressive ideals and penis fish, The Congress is still a dizzying mess. Maybe a song wouldn't have been a bad idea after all.

More:  The Congress  Robin Wright  Harvey Keitel  Jon Hamm  Kodi Smit-McPhee  Paul Giamatti
Follow us on Twitter @The_Shiznit for more fun features, film reviews and occasional commentary on what the best type of crisps are.
We are using Patreon to cover our hosting fees. So please consider chucking a few digital pennies our way by clicking on this link. Thanks!