Take one old farm house, the more secluded the better; throw in a close-knit family excited about their new dream home; if they've got a young daughter prone to imaginary friends then that's absolute perfection. Chuck in a few slamming doors and kids yanked from their beds and you've got the recipe for a chilling, if unoriginal horror movie.


Yes, The Conjuring is beset by these tired old horror motifs from the off. But director James Wan – formerly Saw, soon to be Fast & Furious – explores the depths of these ideas to get the best results possible and breathe new life into the overworked haunted house shtick. The result: a spine-tingling throwback to the 'classic' horror genre and the movies Wan was so clearly inspired by.

Based on a true event from 1971, The Conjuring tells the story of Roger Perron (Ron Livingston) and his wife Carolyn (Lili Tyler). Got your cliché checklist ready? Good. Along with their five daughters – one of whom sleepwalks, another has an imaginary friend – they move into a desolate Rhode Island farm house, complete with boarded-up cellar, cobwebs, creaky pipes and a tree ripe for hangings.

As the customary story arc goes, spooky goings-on swiftly begin to terrorise the family; clocks stop, dogs die, pictures fall off walls, the usual. After one too many bumps in the night, professional demonologists Ed and Lorraine Warren (Patrick Wilson and Vera Farmiga) are called upon to help the distressed family. Obviously they would have called the Ghostbusters, but we all know they wouldn't get into the ghostbusting game for another thirteen years. 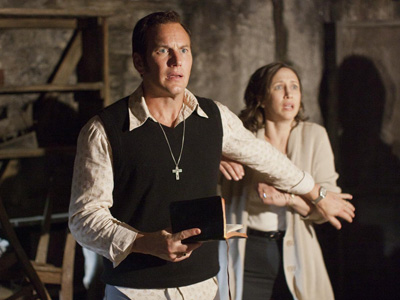 "Have you ever actually read this thing? It's full of plot holes."


What stands The Conjuring apart from your more recent bog-standard horrors is Wan's superb grasp of the material. Working from an effective, simple script from brothers Chad and Carey Hayes, Wan gets the best out of his scenes thanks to a small but extremely dedicated cast.

With long tracking shots, eerie silences, sudden scares and a menacing, Shining-esque score, there's little here that couldn't have been achieved 40 years ago. But far from making The Conjuring feel cheap, such lo-fi charm instead lends itself perfectly to the authentic 1970s setting. The fine array of chequered shirts, snappy sweaters and finely trimmed sideburns doesn't do the film any harm either. 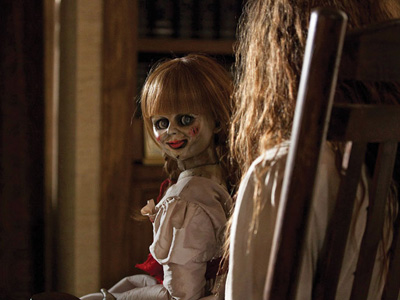 "I see nothing scary about this doll, rush it into production immediately," said someone.


Rather than throwing everything into the mix straight away, we're drip-fed the frights and paranormal activity throughout, beginning with a totally separate but equally distressing prologue that'll haunt your dreams. The story will keep you second-guessing, constantly on edge, and in one particularly unsettling scene, bring back memories of waking up terrified as a child, in tears, convinced there was someone behind your bedroom door. Just me? Oh.

The expertly-paced script not only helps build up great, well-placed scares and tense set-pieces that culminate in a terrifying crescendo, it helps to establish the characters and stories. So when the Warren and Perron worlds eventually collide, we already know everything there is to know about them, and we're transfixed on their wellbeing – a rare trait in horror.

While it's a little repetitive in places, overlong at a tad shy of two hours and struggles to shake off the typical ghostly clichés, The Conjuring is still the closest thing we've had to a classic horror film in a long time.

More:  The Conjuring  Horror  James Wan  Patrick Wilson  Vera Farmiga  Ron Livingston  Lili Tyler  Joey King
Follow us on Twitter @The_Shiznit for more fun features, film reviews and occasional commentary on what the best type of crisps are.
We are using Patreon to cover our hosting fees. So please consider chucking a few digital pennies our way by clicking on this link. Thanks!