'Exciting on paper' is a bit of an oxymoron. Nothing's exciting on paper. Books aren't exciting, unless you throw them at passing cars to make them crash. Cormac McCarthy is a man who writes these so-called 'books', and he's said to be very good at it. And so The Counsellor, his first original screenplay, with a first-rate director and cast, is tremendously exciting on paper. Trouble is, paper and film are very different things.


Ignore for a moment that my whole paper/film comparison thing made little sense, have a look at The Counsellor, and take a moment to survey everything around you. Look at all this stuff, it seems to be saying. Just look at it. Fassbender's got brilliant sunglasses. Javier Bardem's got another nutty haircut. Cameron Diaz is rubbing her flaps on a car windscreen and there are fucking cheetahs everywhere.

I consider myself a man of at least moderate intelligence, but I have to confess I didn't have a clue what The Counsellor was on about half the time. Certainly, there is an obvious and deliberate stance of focusing more on character than on plot, and that's fine by me. But you can only take that so far before your viewer demands to be allowed into the story. I demanded it to begin with, frustrated at all the squandered potential for brilliance in front of me, but eventually gave up hope and enjoyed what I could of the spectacle.

"Knock yourself out, love. I've got enough Nectar points for a free car wash."


The story is - on paper - a broad-strokes tale of cross and double-cross. Fassbender's Counsellor is a rich lawyer about to be married to Penélope Cruz, his workplace a series of cocktail parties. Wanting in on a high-stakes drug deal, he teams up with Brad Pitt's mysterious Westray, over warnings of how catastrophically wrong it has the potential to go. He doesn't listen, and soon enough gets a cartel in the face.

This should be simple enough to follow, but is presented in a series of long, seemingly unconnected dialogue scenes in which the counsellor meets various people who warn him about the darkness he's inviting in. They do it in crazily portentous language that skirts around their point; everything is a riddle or high-minded metaphor, and you remind yourself that the guy with the typewriter usually uses it to write novels, and ones thought a challenging read at that.

This is my point, such as it is, about paper and film. Cormac McCarthy's more than earned the right to a crack at a screenplay, but you get the feeling he's been indulged a little too much. These scenes often don't seem to lead us anywhere, and are presented almost as a straightforward sequential list. If the idea is to enrich the characters, it misses its mark: the counsellor remains a man with no backstory, and no apparent reason to take the risk for which he's volunteered. 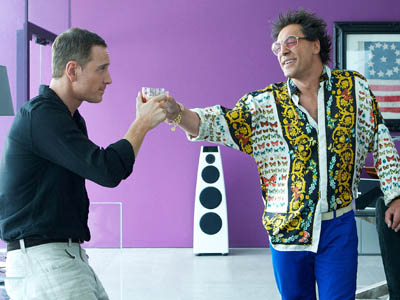 "Here's to your barber!"


Everyone adds colour through their performances. Though there's little engaging about his character, Fassbender takes his opportunities to grandstand effectively where he can. Pitt's laconic Texan gent and Javier Bardem's flamboyant Latin playboy both stand out in particular, and Diaz, given only a cookie-cutter femme fatale to work with, purrs in all the right places. But you get the feeling they're doing it more out of politeness than anything else. A Cormac McCarthy script, they'll have thought to themselves: where do I sign? Then when the thing thudded through the mailbox, they'll have realised what they were in for, and made the best of it. When there are action scenes, Ridley Scott is more than capable of lending them some urgency, but the inevitable return to a ponderous dialogue exchange afterwards weighs him down.

Above all, I was left wishing a more judicious editor had got hold of it, cut some of the dialogue scenes in half, and made good on the more action-oriented, character-rich promise of the trailers. The last half-hour or so has a better sense of pace and delivers some tense moments, but it only reminds you that there could've been much more here, were it not buried. Under reams and reams of paper.

More:  The Counsellor  Ridley Scott  Cormac McCarthy  Michael Fassbender  Penelope Cruz  Cameron Diaz  Javier Bardem  Brad Pitt
Follow us on Twitter @The_Shiznit for more fun features, film reviews and occasional commentary on what the best type of crisps are.
We are using Patreon to cover our hosting fees. So please consider chucking a few digital pennies our way by clicking on this link. Thanks!