The Death Of Stalin

By now the central premise of Armando Iannucci's recent satirical output is clear enough, or has maybe just about been done to death: in politics, everyone's a chancer, making it up on the fly and looking out for number one. In The Death of Stalin there's an extra layer of irony, too: under Communism, there isn't supposed to be a number one to look out for. It's kind of the point.


It feels like there's an extra layer of seriousness as well: in a far more immediate way even than during In The Loop, lives are on the line here. We're shown early on, when Paddy Considine's radio producer is forced to re-record a concert because Stalin wants to hear it, that he's in fear for his life, just like everyone else.

And it bears stressing, while centrist politics is on the slide and far-left thinking is gaining mainstream ground again, that this is Communism's logical extent: gulags, purges, no free press, dissenters silenced. Whoever stopped clapping first at one of Stalin's rallies would be arrested and imprisoned. But calling yourself a Communist is still widely permissible: you'll be thought a bit nutty but not an offender. Its iconography causes nothing like the visceral reaction you might expect given the millions who were put to death under it, so little so that the shadow chancellor can deliver a speech in front of a hammer-and-sickle flag in Trafalgar Square without being drummed out of public life. 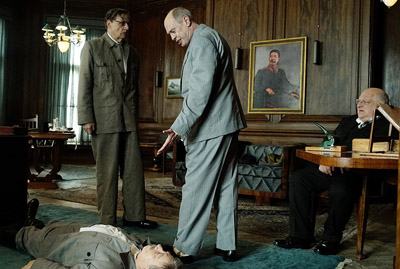 Khrushchev: a stickler for a clean carpet.


A film like The Death of Stalin isn't going to redress this balance, but it doesn't let you forget how high the stakes were. After Stalin's death the Central Committee hastily reform around Malenkov (Jeffrey Tambor, who plays him as almost apologetic for being there) while others vie for power. The ensemble cast Iannucci's roped in is so strong it can't very well fail: at the dysfunctional centre are Buscemi's Khrushchev, Michael Palin's Molotov and Simon Russell Beale's horribly conniving Beria. Everyone stabbing one another in the back and flailing about in their incompetence isn't new ground for the creator of Veep and The Thick Of It, but he does break with expected proceedings in a few ways.

First: none of the signature faux-documentary camerawork, which always made implicit the idea of getting a peek behind the curtains at something They don't want you to see. It wouldn't quite fit here, not least because the construct would fall apart: the visual grammar of The Thick Of It suggests the presence of a cameraperson, and even though that's implicit and easily forgotten, it'd be jarring once people started getting shot and you began to think of the camera as a witness.

Second, it's not as funny as his previous work, or at least not in the same way. The stage isn't quite set for the sort of creative foul-mouthed invective usually spat about the place, partly because of the period setting. The choice to have the characters speak English in their native accents lobbies against this, though: I'd feared it might be distracting (I couldn't get past the cut-glass British-sounding Nazis in The Boy in the Striped Pyjamas) but you know you're on safe ground once Big Joe himself starts swearing in estuary tones. The fact they all speak like this is funny in itself and allows for deeper comic characterisation, especially in the case of Jason Isaacs's Georgy Zhukov via Sheffield. 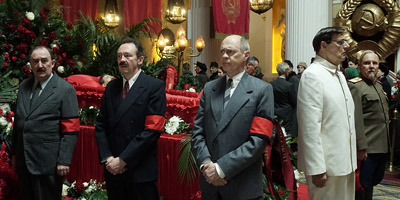 "You remembered to book the caterer, right?"


There's real horror in it too at times: a couple of deaths are shocking and brutal, far from played for laughs and shown up close. It's a risk, where it could've been guilty of overreaching, but there's a chaotic tone here established into which it all fits quite snugly.

Since 2005 Iannucci's held up a mirror to a period in politics characterised by the loss of faith in traditional leaders and a growing sense that the systems and hierarchies we trusted are broken, and populated by agents no more competent than we would be. Brexit and Trump are the end-products of this drift, or maybe just steps along the way to something unimaginable. The Death of Stalin is a reminder that solutions found towards ideological extremes are no less likely to be chaotic – and involve a lot more folk getting shot in the back of the head.

More:  The Death Of Stalin  Armando Iannucci  Jason Isaacs  Andrea Riseborough  Steve Buscemi  Rupert Friend  Jeffrey Tambor  Paddy Considine  Michael Palin  Simon Russell Beale  Paul Whitehouse
Follow us on Twitter @The_Shiznit for more fun features, film reviews and occasional commentary on what the best type of crisps are.
We are using Patreon to cover our hosting fees. So please consider chucking a few digital pennies our way by clicking on this link. Thanks!