The Hollyoaks late-night special was, on the surface, a glorious thing. Not only would the characters suddenly free themselves from the confines of decency that a pre-watershed airing imposed and begin to say words like "piss", there would also be a strong suggestion that you would see the breasts of the blondest cast member of the age. These goods were never delivered, but they do seem to have been the creative inspiration behind Gemma Atkinson's casting in The Dyatlov Pass Incident.


I do think instinctively that roles like Atkinson's are indicative of the sexism common to horror films: she's a perfectly capable actor, who here nails the American accent and is convincingly terrified when called upon, but whose character exists wholly to suggest that the viewer might at some point see her tits. But moreover this argument seems to matter much more when there's something at stake; some sort of disparity between the prominence of the male and female characters. Here it's less acute, because there's generally not enough going on to make you care one way or the other. 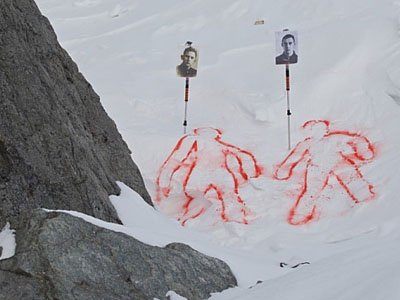 Dyatlov golf course: passed over as a Ryder Cup venue for the fifth year running.


There should be, though. The Dyatlov Pass Incident is based on one of those true stories you sometimes come across on Wikipedia and spend the whole afternoon engrossed in. A party of nine Russian hikers were found dead in the Ural mountains in 1959, some partly clothed, some with injuries so severe they couldn't have been sustained at human hands. The Soviet government appeared to whitewash it, barring access to the site for years. I'm thinking Yeti attack, or secret nuclear test site, or some sort of snow-based zombie Loch Ness monster/Area 51/fake moon landings situation.

Now, cue me up a documentary about this on Netflix, and I'll watch the shit out of it, grinning vacantly like a fuckwit while you steal everything I own. That's because the story itself is fascinating, and doesn't need embellishing by way of a found-footage story about a group of college students heading to Dyatlov Pass to make a film about it. It certainly doesn't need the usual ham-fisted expository dialogue explaining why everything's being filmed. (One particularly laboured exchange lets us know that a guy always films his "trail hookups" on his phone, to ease us into the interior tent scene in which the promise of Atkinson's rack is made plain, then cruelly reneged upon. You wonder whether his motivation wasn't in fact self-explanatory.) 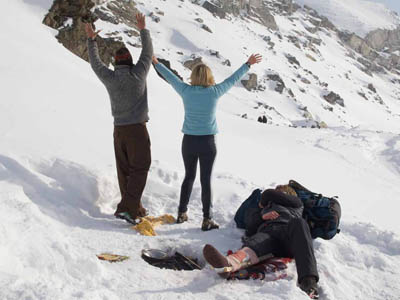 Typical. Have a stab at the YMCA dance to lift everyone's spirits, and there's always one guy who won't pull his weight.


As the gang progress into the Urals, they uncover a door in the side of a mountain, and once they're beyond it everything goes very night-vision, and it all gets exceedingly silly. Little makes sense. When the crew is being shot at, main character Holly says in terror that it must be an attempt to scare them off by the Russian military, who must know they're here because she had to apply for permits. You might argue that a more effective strategy on the Russians' part would've been to simply refuse the permits.

But even before all this, the greatest misstep is the failure to explore the original incident. References to it are ill-thought-out, with the most interesting details - like the fact that one hiker was found with a missing tongue - buried in little off-hand remarks too late in the day, failing to pique your interest when they're obvious open goals. This is what gnaws at you: the feeling that there's something interesting you're not seeing, and that this is a good story misrepresented. It shares much with the Hollyoaks late-night special, in fact: you're left feeling ultimately unsatisfied, and at no point do you see Gemma Atkinson's breasts.

More:  The Dyatlov Pass Incident  Devils Pass  Renny Harlin  Matt Stokoe  Holly Goss  Gemma Atkinson  Richard Reid  Luke Albright  Horror
Follow us on Twitter @The_Shiznit for more fun features, film reviews and occasional commentary on what the best type of crisps are.
We are using Patreon to cover our hosting fees. So please consider chucking a few digital pennies our way by clicking on this link. Thanks!