The Expendables 2 isn't a movie that exists in our conventional universe. Sure, it stars men of flesh and blood, who live and breathe and bleed, but it is not set in reality. It's an extreme cinematic experience – a 'movie movie', the kind which characters in Quentin Tarantino films enjoy. It's just that little bit exaggerated – not always to an immediately noticeable degree, but it feels like it's constantly overclocked. The Expendables 2 is turbo-charged, hyper-violent, super-stupid and doesn't give a single, solitary shit.


This is a film set in a world where young guns don't exist: the old guard of action are all that's left from stopping the villains having their way with the world. Sylvester Stallone's stable of old war-horses continue to barely avoid the knackers yard, this time facing off against an equally ancient foe in Jean-Claude Van Damme's villain, Jean Vilain (brilliant). In the Expendiverse, young people – like Liam Hemsworth's sniper Billy The Kid, and to a lesser extent, Jason Statham's Lee Christmas (brilliant) – only exist to be tutted at by their elders. It is no surprise the producers are already looking to cast Harrison Ford and Clint Eastwood for Part III: the entire world is The Expendables' lawn, and we're standing on it.

The plot, which is largely surplus to requirements, sees Stallone's merc Barney Ross take a job from Bruce Willis' handler Church, which sees his motley crew dropped in whichever Eastern European country gave the best tax breaks, searching for a macguffin that doesn't matter, with their dicks in one hand and their automatic weapons in the other. The Expendables 2 is essentially a succession of videogame levels, boasting Call Of Duty-style combat: strafing guns, headshots, knife kills and frags, with a total lack of damage taken. There's no real threat or danger, just burly men spouting clichés bursting into rooms and corpsing up the joint without even stopping to reload. The real reason they're killing people and blowing shit up is so they can say stuff like "Rest in pieces!" with complete sincerity afterwards. The Expendables are okay with that level of machismo; you have to be too. 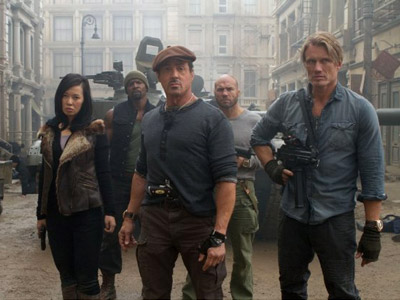 Guys, get it? Rest in 'pieces'? Because normally it's rest in... Guys?


The Expendables 2 frequently flirts with parody but is just chummy enough with its audience to avoid patronising them. There's a fine line between a genuinely naff throwback like this and a tongue-in-cheek piss-take like Machete, but Stallone and friends walk the walk. When Hemsworth's plucky youngster speaks of quitting and heading back home to his girlfriend, who he's totally going to marry one day, no one is winking at the camera. When newcomer Nan Yu speaks of her desire for "a little Italian" while looking lustily at Stallone, the cringes from the audience are not planned. This is action cinema the way they used to make it in the '80s and '90s: big on brawn and low on brain, with humour that's mostly accidental. You either love it or you hate it, but at least it's the real deal.

Indeed, the moments when The Expendables 2 comes undone are when the characters become a little too self-aware of their own ridiculousness. Last time around, it was enough just to have Sly, Arnie and Bruce all in the one room; this time around, they have to swap catchphrases to hammer the point home. (Play a fun game! Think of a movie either actor has been in and write a line of dialogue containing the title e.g. "Make sure you don't DIE HARD out there!" Chances are, it is in the movie.) The movie's low point is the introduction of Chuck Norris, who is wheeled on for a lame three-minute cameo ("I heard they call you the LONE WOLF") where he gets to reclaim ownership of his own overused meme and get trivial on our asses. It's embarrassing for all concerned. 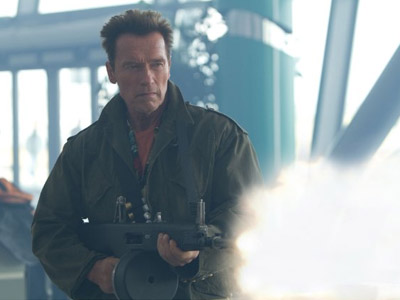 "Hey JUNIOR, would some COLLATERAL DAMAGE be a RAW DEAL?"


Elsewhere, there are pleasing quirks that make The Expendables 2 lots of fun. Dolph Lundgren – as before, the ace in the pack – gets a fantastic back story and is retconned as an ex-MIT maths professor. Jason Statham's mobile ringtone is a quacking duck for seemingly no good reason. It's revealed that, bizarrely, The Expendables work to a monthly rota. And then there's Van Damme, a world unto himself, swimming around in his own mad ocean, misreading lines and making vague threats out of the most innocuous exchanges of dialogue. Jean Vilain. Brilliant.

Each Expendable performs his or her duty admirably. Stallone gets the emotional meat (the equivalent of a six-pack of Richmond skinless sausages); Statham gets the best fight scenes (knifing chumps in a monastery); Terry Crews gets the funniest lines; Arnie gets the best paycheque. It should go without saying, but everyone is in amazing shape. The combined age of the principle cast members is 609, compared to say, the cast of something like The Hunger Games, who have a combined age of about 17½.

There is precious little depth to proceedings, as expected, except for one aspect of The Expendables 2 which may go unnoticed by many, but not by me: the subject of Barney Ross' love life. Twice in two movies, Ross spurns the advances of younger women – not because he's gay, but because he's dangerous. Bear in mind that Sylvester Stallone directed the first movie and wrote both, and there's a sad emotional undercurrent to the series, whereby his character is too grizzled and too old to find love. It's an unspoken agreement between Stallone and his audience: you guys don't want to see me make out with a chick half my age, because it's gross. Well, I appreciated it, Sly. Kudos. You know someone like Steven Seagal writes it into his contract that he gets a love scene with a girl 30 years his junior, pawing at her on his big old bed in his bulky duffel coat. 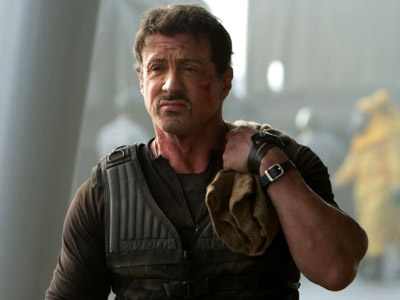 
That's about as restrained as The Expendables 2 gets, truth be told. It's excessive in almost every other area possible: from outlandish explosions to over-the-top dialogue via horrendously delivered gags, it pushes the limit of what people will readily accept from an action movie that isn't directed by the Zuckers. By the time Arnie jokes "We all belong in a museum!", you're ready to agree: The Expendables 2 is an antique for the ages – entertaining, but not always for the reasons intended.

More:  The Expendables 2  Simon West  Sylvester Stallone  Jason Statham  Dolph Lundgren  Terry Crews  Randy Couture  Arnold Schwarzenegger  Bruce Willis  Chuck Norris
Follow us on Twitter @The_Shiznit for more fun features, film reviews and occasional commentary on what the best type of crisps are.
We are using Patreon to cover our hosting fees. So please consider chucking a few digital pennies our way by clicking on this link. Thanks!