In The Expendables 3, grizzled veteran Barney Ross (Sylvester Stallone) faces an existential crisis after miraculously cheating death and battling the ravages of age, and is ultimately forced to put his demons to rest to defeat a former ally who has gone rogue. Oh, and literally blow the shit up out of everything he passes.


In what we can only assume was a rush to get another instalment out of the new 'geri-action' franchise before one of the key cast carked it, the plot of Expendables 3 is essentially the same as The Expendables 1 & 2, except they've managed to cram in even more new faces this time around, old and young. There are so many people in it that at times the film, like Sly's face, looks like an over-stuffed sausage, ready to burst at any moment when the action heats up.

It's almost too obvious to point it out, but the main cast really does look old (with the exception of Jason Statham as Lee Christmas – The Stath refuses to age). Like, really, really old. Sly looks a touch weary and weathered, and Harrison Ford (brought in to replace Bruce Willis) looks befuddled and confused, as if he's wandered onto set by accident whilst out to get a new pair of slacks. When the action ramps up by the end, you can't help but wish that Hollywood would just let these dudes have a little sit down and maybe a nice cup of tea. 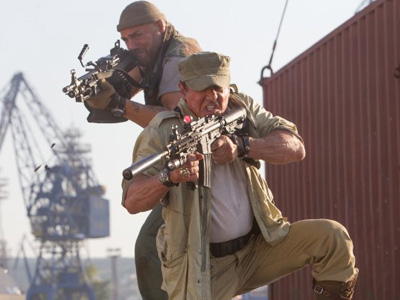 
However, Old Father Time will just have to wait when there's millions of dollars at stake, which is just as well as we wouldn't be treated to the mega-explosions and ridiculous stunts that make this franchise so compelling. Before the opening credits have even started to roll, new Expendable Wesley Snipes (Doc) drives a heavily armoured train into a Russian prison before he and the gang fly out to their next mission, wilfully ignoring the fact that they've potentially released hundreds of dangerous convicts into the countryside. As is painfully obvious, subtlety and logic is not part of The Expendables universe.

It's on this next mission that Barney comes to realise that maybe these ol' geezers aren't quite what they used to be, after a run in with mega-villain Conrad Stonebanks (Mel Gibson) leads to Terry Crews' Hale Caesar getting shot in the butt. Seriously. Barney swears bloody vengeance and sets out to take down Stonebanks, which leads you to ponder that for a group that call themselves "The Expendables", they don't half take things seriously when one of them has a cap busted in his ass.

With his ears still ringing from the war-grade bomb Stonebanks decides to drop on the 'Pendables, (not killing them but probably wiping out half of his payroll – HR must be a nightmare at the Stonebanks Corp.), Barney takes this as a sign his current crew are past it and so recruits some sexier young 'uns for his new mission. Note that Barney does not consider himself to be past it, but unsurprisingly that's because Stallone co-wrote the screenplay.

It feels like there are at least fifty introductions to the new recruits, including Kelsey Grammer as a twinkly recruitment consultant stopping off from his fishing trip to help stage military coups, and Twilight's Kellan Lutz as a soldier with authority issues (major fail on the part of that particular careers counsellor). After pinpointing their major skills (kicking things, climbing, crossing a busy road on their own) the new guys jump into action and the old guys are dropped without so much as a by your leave, left to cradle their knives in bed at night and looking longingly at their guns. 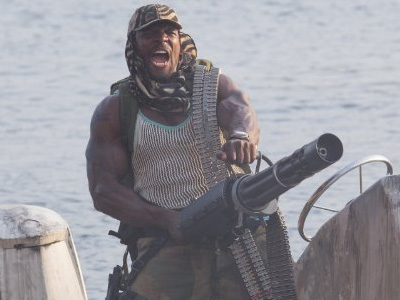 It's funny because it looks like a giant dick.


There's an inevitable clash when the old school rag on the young kids for their reliance on technology, but rather than reinforcing the notion that sometimes the old ways (flicking knives) are better than the new (drones dropping bombs), it just brings to mind the annoyance experienced by anyone who has had to act as IT support for an older relative who's just bought an iPad. Frankly, the old Expendables come across a bit cranky because they haven't had their soup yet. Predictably, it's this faith in new technology that leads to the undoing of the younger Expendables, and the old dogs have to step in, like your dad begrudgingly picking you up in his Ford Fiesta when you've run out of money for a taxi after a night out.

What then plays out is classic Expendables; there's the much expected Expenda-bants – Gibson gets to spit out such gems as "The Expendables? Now they're The DELETABLES!" and "I snap your spine, you snap my spine, we'll make it snappy". It doesn't quite hit the heights of Jean-Claude Van Damme's "You wanna kill me like a sheep?" but who can fail to raise a small smile at the following exchange?

STALLONE
"Get out of your seat, Christmas is coming!"

BANDERAS
"But it's only June!"


Expenda-banter! And there's Expenda-fashion too. Flat caps must be tax-deductible, as Snipes' headgear gets nattier and nattier; Statham gets a nice cuddly jumper and Dolph Lungren (as Gunner Jensen) looks like he's been given £50 credit to spend on t-shirts in Urban Outfitters. Stallone himself sports a fetching Aztec print / denim shirt, which comfortably takes him from the slums of Mexico to the glam clubs of LA without even having to change accessories. They wear a good thread, this lot.

After that, it's pretty much people punching each other and buildings being blown up, which is really all the audience would be bothered to come for. However, for so many on-screen killings the bloodshed is surprisingly low; is Stallone getting soft in his old age? A bit of claret splashed here and there would have added a bit of grit to show that EX3 means business, but the deaths in Super Mario Bros are bloodier than this. 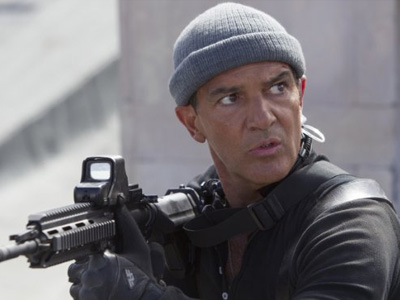 Antonio was distracted by something shiny.


It's all mindless fun but it does drag on, lurching from one ludicrous situation to the next in some made-up Soviet country. The dialogue is memorably bad, (at one point Christmas explains the meaning of the word 'vague' to Ross, saying it means "secrets"), but every half decent joke that manages to creep in is repeated twice in case any of the audience are having some problem with their memory. Drummer (Harrison Ford) manages to get in two digs about Sly/Ross sounding like he's had a stroke, and Arnie gets to holler "Get to tha chopper" twice in five minutes. It's almost as though the producers think that the intended audience have the same collective age as the veteran Expendables.

With so many vintage action stars vying for room, there's just not enough scenery for them to chew. Basically everyone who has any screen time at all, from guy fourth in line in the fish and chip shop queue to 'blink and you will literally miss him' Jet Li popping up for roughly 90 seconds, has been 'shopped into the promotional posters. This gives the impression it's a lot larger than it actually is but hardly anyone is given time to get their lines out before we have to move on to another tank being blown up. Wesley as new/old recruit Doc gets that impressive opening jailbreak and even a catchphrase ("Jang-a-lang-a-lang") but he's largely forgotten until the climatic senes. Antonio Banderas (now known as Bantonio Banteras) is a fun and enthusiastic addition, although you could splice in scenes from Puss In Boots and not notice any different. Everyone else's screen time is dependent on whoever Stallone happens to be looking at and with that lazy eye, sometimes it's hard to tell. It took me about three quarters of the film to realise that Arnie wasn't in fact a ghost that only Sly could see and hear, so small is his interaction with the rest of the cast.

Even though a considerable amount of hype and marketing has gone into trying to cram all those names onto the promotional posters, it seems a huge waste to build this cast up only to ignore them for the new blood. The newcomers are woefully two dimensional – Kellan Lutz brings all that charisma from those vampire movies to stare moodily and stick his jaw out, and the others are barely worth looking up on IMDB. The token "Expendabelle" this time around is MMA Champion Ronda Rousey, who is given scant backstory.

The action pieces are huge and impressive but it's all bang and no flash – that is, it's about explosions rather than exposition. You won't learn anything about the nuances of acting or the futility of war, but you may get a headache (does it have to be so loud? Am I showing my age here too?). Overall Expendables 3 remains faithful to its B-movie roots, but there is a fine line between what makes a bad movie so bad it becomes good, and just a plain bad movie. If you go in with fairly low expectations you won't be disappointed, but make the most of it while you can before Old Father Time marches on the cast's true expendability.

More:  The Expendables 3  Expendables  Sylvester Stallone  Arnold Schwarzenegger  Mel Gibson  Harrison Ford  Terry Crews  Jason Statham  Randy Couture  Jet Li
Follow us on Twitter @The_Shiznit for more fun features, film reviews and occasional commentary on what the best type of crisps are.
We are using Patreon to cover our hosting fees. So please consider chucking a few digital pennies our way by clicking on this link. Thanks!