Those awful people that weren't born until the nineties, or God forbid, the 'noughties' - what must they make of a man like Robert De Niro? Because even though you can buy his DVDs at your local newsagent and go online to download literally any movie he ever made in seconds flat, surely it's only fair to judge an actor on his recent output: say, from the last 20 years. De Niro has earned his right to be less choosy, obviously, and I'm not about to shit on the likes of Raging Bull, Goodfellas and The Deer Hunter, but The Family isn't so much indicative of a career slump as it is the kind of painfully average movie that makes you realise he's completely stopped caring.


De Niro plays ex-crime boss Gio Manzoni, now going under the identity Fred Blake and hiding out under the Witness Protection program in Normandy, France with his Brooklyn-raised family; wife Maggie (Michelle Pfeiffer), daughter Belle (Dianna Agron) and young son Warren (John D'Leo). The set-up is tailor-made for culture clash comedy, with the savage, ill-mannered Americans invading France once again, but what's surprising about Luc Besson's movie is how he's not interested in proving the locals wrong. By and large, Gio and family are awful people: violent, short-tempered and really quite nasty. He's a snitch, she's a bitch. The kids are all right, but given half a chance, they'll grow into their parents. 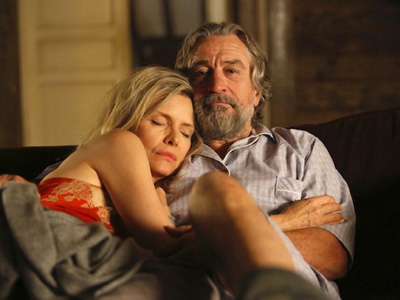 
The tonal shifts between violent gangster movie and knockabout comedy are about as subtle as a horse's head in a bed. De Niro's character, masquerading as a writer to keep up his cover, begins writing his memoirs and lists 10 reasons why, deep down, he's a good guy. This is intended to be humorous, but the brief montage shows Gio performing good deeds like executing men at point blank range. Every time Besson uses a bullet in a body as a punchline, a real joke somewhere out in the wild dies.

Of course, it's all vastly unoriginal. De Niro already wore out the flipside of his gangster persona with Analyse This and Analyse That, while Michelle Pfeiffer has been married to the mob before, first in Scarface and then in, um, Married To The Mob. There are hints at deeper themes in play, but they're all ignored in a rush to get to a gun-fight: De Niro briefly wrestles with his conscience while writing his memoirs (before surmising that, actually, he's a great fucking guy) while Pfeiffer wrestles with her faith (until she realises, actually, she doesn't give a shit). Only Dianna Agron's seduction of her maths tutor has any spark - everything else just feels like going through the motions. 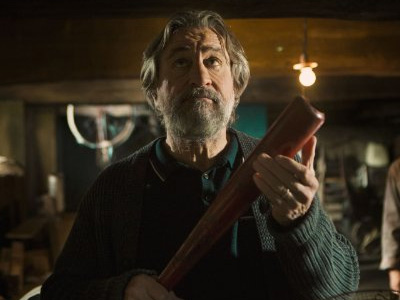 You can't threaten me. You're a picture.


To watch The Family is to indulge in mediocrity. It's not terrible, in fact it's perfectly watchable, but at no point does it rise above the ordinary, and at no point do you feel that anyone is putting 100% into the movie. Besson ultimately has to take the blame, a good ten movies past his best, but De Niro is culpable too. Just listen to the effort he puts into the movie's closing voiceover, an emotional appeal to the viewer read with all the passion of a man absent-mindedly reading the ingredients off the back of a cereal box. It's the kind of performance that makes you stop caring that he's stopped caring: the epitome of a Gallic shrug.

More:  The Family  Luc Besson  Robert De Niro  Michelle Pfeiffer  Dianna Agron
Follow us on Twitter @The_Shiznit for more fun features, film reviews and occasional commentary on what the best type of crisps are.
We are using Patreon to cover our hosting fees. So please consider chucking a few digital pennies our way by clicking on this link. Thanks!