I've been putting off my review of The Five-Year Engagement for ages now, despite having written notes at the screening I attended about two weeks ago. Exhaustion is about to consume me, so instead of putting the review off for another day, I'm just going to forget about the in between parts and fancy words and cohesion that comes with a proper write-up and just let you read my raw notes. Think of it as an interesting case study. Or, like a massively lazy excuse for a post. Sorry. Normal service will resume soon. Most probably.


These notes have not been altered in any way since the night I saw The Five-Year Engagement, so forgive the occasional typo and rogue comma. It was written on an iPad on a train and I was quite tired then as well.

Overlong, will it to end. Feel every year.
Not as out and out funny as most Apatow movies, doesn't quite have the emotional undercurrent to keep it flowing.
You forgive a lot for Emily Blunt and Jason Segel. So likeable. you have to like them. Add pic of them fucking about from Muppets 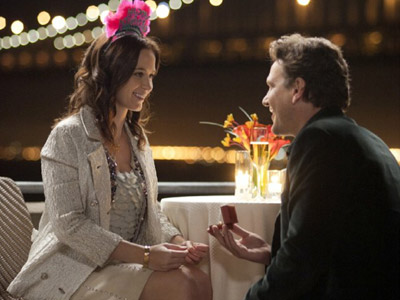 Turns out that picture doesn't even exist. This is going GREAT!


Excellent chemistry, so much so the movie almost feels,like a foregone conclusion from the start. Little dramatic edge. You almost wish the movie wold dare take a different stance and suggest an alternate ending. Doesn't exactly explore much new ground.

Part of the problem is that FYE spends more time focusing on them when they're miserable, which does have a slightly saddling effect. Too many scenes are demarcated between plot and comedy, ie comedy brother and sister double act, Movie is at its best when combining comedy with plotlike r cookie monster elmo scene.

Thankfully JS and EB make for a,wonderful couple, sweet and real and believable.

Some great lines in there that are somewhat lost ("I'm gonna be the first black guy to freeze to death!") and a few incongruous moments of physical comedy raise a laugh. Otherwise it's one of those romantic comedies that spends more time unnecessarily creating drama for its characters.

Has that annoying habit of making characters that form obstacles to the plot,and are easily dispensed with when overcome. Rhys Ian's for example, one of the most rational people in the whole movie ("Look, if a woman goes to kiss me, im just going to fucking kiss her, alright?") but gets the screw job when it comes down to it.

Alison Brie with an English accent. Oh my life. 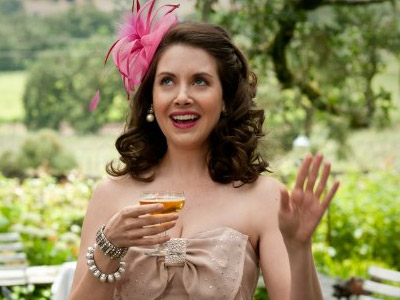 I stand by that one, actually.
An insight into the journalistic process, or easily the worst post we've ever done? If I claim it was ironic, I can't be an idiot, right?

More:  The Five-Year Engagement  Nicholas Stoller  Jason Segel  Emily Blunt  Alison Brie  Chris Pratt  Rhys Ifans
Follow us on Twitter @The_Shiznit for more fun features, film reviews and occasional commentary on what the best type of crisps are.
We are using Patreon to cover our hosting fees. So please consider chucking a few digital pennies our way by clicking on this link. Thanks!