The Following: season one, episodes 1–8

I like Kevin Bacon a lot. He's the sort of actor who should really be able to elevate a TV project. And the prospect of him leading a major network drama is a great one. But The Following? It's an absolute mess.


Imagine, as I'm sure many of you have at one time or another, that you were planning on setting up a murder cult. What sort of recruitment drive would you embark on? Well, for a start, all your followers would have to be mentally ill or at least easily open to emotional manipulation. You'd need to be looking at hangouts for the dispossessed, maybe prisons, mental health facilities, support groups for abuse victims or drug addicts, that sort of thing.

Or if you were Joe Carroll in The Following, you could pretty much just put up an ad in Caffè Nero. Before too long, you'd have a mansion packed with eager and willing acolytes, all of whom look like they're working on mufti day at the Apple store. They'll sit around using their laptops and playing swingball in the garden, awaiting your command to kill. You know, just like the Manson Family did.


I realise, of course, that the point is they can all hide in plain sight. It wouldn't work if they were all crouching in corners gibbering about Satan or smearing themselves in shit. But you can't expect your audience to buy that a crowd of obviously well-adjusted, freshly moisturised, hair wax-sporting hipsters are all happily doing a serial killer's bidding between lattes. And it's a missed opportunity to explore an interesting idea: how social networking forms virtual cults, and how it could be used to create a real one. If there was ever a time it'd be easiest of all to organise a murder cult, it's now. Justin Bieber could set one up with one tweet. But this remains undeveloped. 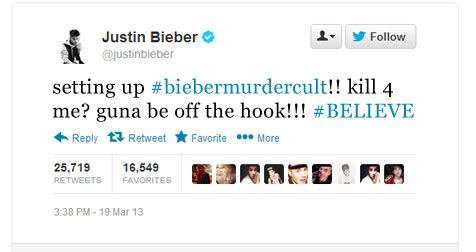 I hesitate to say this is the main problem with The Following, because there are so many. Like its insistence on building every episode into a showdown finale, in which Bacon's hunch suddenly gives way to a realisation, and they all race to an abandoned warehouse with their guns cocked. It's a serial drama that's trying to be an episodic one, as if each episode has to be a movie in its own right. The pacing of TV is lost on the writers, it seems: showrunners with movie backgrounds often talk gleefully about the greater opportunities TV affords for sustained characterisation and plot development, but here there's no advantage taken of them.

Its constant flashbacks quickly begin to grate, too, always punctuated by a melodramatic whooshing noise, and never confident enough to leave off the date in the corner. Each time it's obvious what period we're in through hair, clothes, and especially just situation (there are only two, anyway: pre- and post-Carroll's arrest), but there's the date just in case. It's begun to use them for ancillary backstory too, which just seems like overkill, like when showing us that the head of the FBI Alternative Religion Unit grew up in an abusive cult. 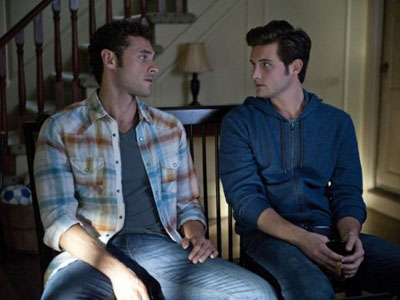 
Kevin Bacon is great at being Kevin Bacon, and does his level best with what he's got here, but he's up against too much of a cliché-ridden premise. He's been physically and emotionally scarred by catching the bad guy, now he has to reluctantly come back because no one else understands the bad guy, he drinks too much (well ... he kind of stopped doing that after a couple of episodes; guess he can take it or leave it), but he's relentless, and so on.

The lazy writing piles up in his path, impossible to circumvent. Towards the end of episode 7, he says to Natalie Zea: "I'll never give up. That's exactly what Carroll wants." No, that's the last thing he wants. The whole point is he wants you to chase him and fulfil his allegory of a story in which you're the hero or whatever it is. Weren't you listening? This is typical of the kind of platitudes thrown into the script without thinking about whether they actually mean anything.

Here's the thing that confuses me the most. I never find The Following boring. I never consider switching it off or not bothering with the next episode. It engages me fully. But it frustrates me more than any other show I've seen in years. Maybe it's because all its key elements seem to be in place, and it should be gripping, and willing to really go to the dark places it claims to. But instead its villain is unconvincing, seemingly cast on the strength of a post-it note stuck on an intern's monitor that says 'BRITISH = CREEPY', and its overall premise even less so. But of course, I'm still going to watch it. I'm exactly the sort of person who ends up in a cult.

More:  The Following  Kevin Bacon  James Purefoy  Natalie Zea  Shawn Ashmore  Kevin Williamson  FOX  Sky Atlantic
Follow us on Twitter @The_Shiznit for more fun features, film reviews and occasional commentary on what the best type of crisps are.
We are using Patreon to cover our hosting fees. So please consider chucking a few digital pennies our way by clicking on this link. Thanks!