The Girl On The Train

Here's Emily Blunt on the Girl on the Train poster, looking suspiciously like she has more make-up on than she does in the actual film (again). She's very much the best thing about it, but still: if there's one genre for which I have a soft spot, it's the serviceable but unexceptional thriller.


I say unexceptional because the unreliable narrator/reveal-via-flashbacks thing has been done plenty by now. But hey, who cares. These days I find myself happier in the snug embrace of the familiar as long as it's well made than sitting through a brave but flawed effort at breaking new ground.

Blunt's character Rachel nods towards the public's current affection for true crime: divorced and alcoholic, she commutes each day past the house she used to live in with her cheating husband (Justin Theroux), grimly noting the idyllic scenes of his new family within, like a billboarded version of the daily Facebook feed of smug marrieds and their babies that taunts the drunk and single. Next door lives another couple to whom she attributes characteristics and imagines a life for as she rattles by (a nice relatable detail: I do this too). When she sees something shocking from the train she goes all Serial podcast on it: this life she's imagined for the couple seems dashed, and now the passive onlooker is an amateur sleuth, albeit unsure whether she's investigating herself, motivated vicariously and doing it pissed. 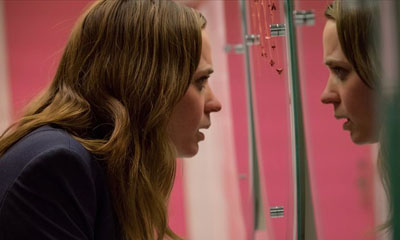 
The best thing about Blunt's performance is that she knows when to take the lid off rather than just discarding it altogether: an early scene where she drunk-slaps a mirror features such a guttural shout it could only have erupted from an actor who's shed all sense of self. Drunk acting requires understanding of its levels, and the behaviour of the true alcoholic involves a loss of attention to social nicety and sometimes standard motor function, rather than revelling in ignoring them. So she's not stumbling around not giving a fuck; she's forgotten how to give a fuck. A scene where she coos over a woman's baby before the mother realises she's drunk lets you in on how volatile this situation is so you can appreciate the danger.

There's plenty wrong with it, like the fact that the resolution relies on a massive coincidence, and the circular effect created by the endless flashbacks and do-overs from another perspective, which gets a bit wearing. If you rearranged everything into a linear story it would be pretty dull, so really you're left with something that relies on its form to engage you. The form is well crafted and more than enough to carry it when propped up by Blunt's excellence, and it disguises what it needs to well enough to surprise, but probably not enough to make a rewatch worthwhile once coloured by foreknowledge. Still, it makes plain the obvious fringe benefits of drinking on the train, so I'll make a start on that Monday morning.

More:  The Girl On The Train  Tate Taylor  Emily Blunt  Haley Bennett  Rebecca Ferguson  Justin Theroux  Luke Evans  Edgar Ramirez  Laura Prepon  Allison Janney  Lisa Kudrow
Follow us on Twitter @The_Shiznit for more fun features, film reviews and occasional commentary on what the best type of crisps are.
We are using Patreon to cover our hosting fees. So please consider chucking a few digital pennies our way by clicking on this link. Thanks!