By now you are probably one of the bazillion commuters that have already familiarised yourself with the first novel in Stieg Larsson's Millennium trilogy, and/or one of the many world cinema boasters that have watched the original Swedish film adaptation. If not, you've really been missing out on one of the greatest thrillers of the 21st century. Although, lucky for you, you'll also get to see Fincher's fantastic version without ever knowing what's coming next. I am, as they say, well jel.


Because that's really the only problem with this US de-subtitled remake. After Se7en and Zodiac, Fincher completes a trilogy of gritty noir murder mysteries and it's clearly a perfect marriage of director and material, but even his own recognisable stylish-but-uncompromising take on the novel can't detract entirely from the fact that we are watching the same story that was released just two years ago.

And yet, in many ways this is admirable – Fincher is clearly intent on simply making the best adaptation he can rather than stamping his own mark all over a new version of an existing film. And so, in evidence, gone are his usual bursts of visual flair in favour of a more straightforward approach to telling the story. 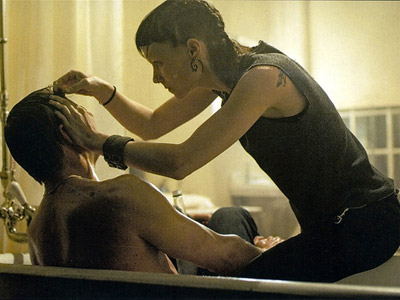 Originally this scene had floating credits, a Winklevoss twin and Brad Pitt spliced into it.


Aside from a frankly manic opening credit sequence – set to Trent Reznor's take on Led Zeppelin's Immigrant Song - which plays like Francis Bacon and HR Giger shared a nightmare and then had it storyboarded by Satan, there's very little here to suggest 'Hollywood' or even 'big budget'. No, instead of flashy camera tricks and neat visual imagery, Fincher just washes out the colour to match the snowy Swedish scenery, contrasts it with (appropriately) inky black and simply lets Larsson's intriguing story do all the work.

All of the actors involved are, typically for a Fincher film, perfectly cast, with Daniel Craig proving to be a better fit for the role of the studious lothario Mikael Blomkvist than the original's Michael Nyqvist. All eyes are, however, rightfully on Rooney Mara as the film's titular Lisbeth Salander, who is surely one of the most irrepressibly fascinating characters conjured up in the last decade. With the role providing a Hollywood calling card for Noomi Rapace in the original, it had seemed impossible to imagine anyone else taking the part, but Mara sells the character just as perfectly.

As the sociopath hacker with aggression, shrewdness and mistrust in equal measure, all attention is naturally drawn to Lisbeth in any given scene and Mara not only has the on-screen presence worthy of this burden, but she more than holds her own against her more experienced co-stars. More importantly, she convincingly portrays the more human aspects of Lisbeth's otherwise icy exterior, including a few brief flashes of humour and the more harrowing moments of victimisation following the particularly distressing and brutal scenes of sexual abuse. 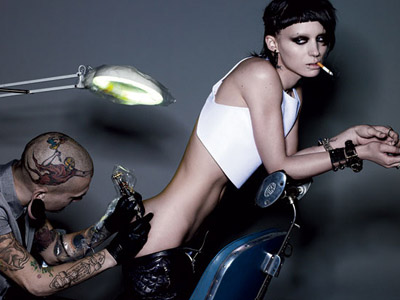 
Come the end of the film's 158-minute duration, we are privy to an epilogue of sorts that, while feeling a little tacked-on, is actually more in keeping with the novel and adds an extra layer to the relationship between Blomkvist and Salander that should then be explored further in the next two films of the trilogy.

And that's where Fincher can really help Larsson's Millennium trilogy make its mark in movies. While this film is a brilliant, dispassionate rival to the also-brilliant Swedish original, the films that could really use the Fincher treatment are the two sequels to follow. With those two in the bag, we could have another near-perfect film trilogy on our hands.

More:  The Girl With The Dragon Tattoo  David Fincher  Daniel Craig  Roony Mara
Follow us on Twitter @The_Shiznit for more fun features, film reviews and occasional commentary on what the best type of crisps are.
We are using Patreon to cover our hosting fees. So please consider chucking a few digital pennies our way by clicking on this link. Thanks!