Tarantino movies are primarily known for two things: long, wordy dialogue and extreme, bloody violence. However, the difference in this new drawling epic, is that the two are kept almost entirely separate, with viewers forced to sit for over 90 minutes of bum-numbing scenery-chewing before a first shot is even fired. Still, pacing issues don’t exist in a Tarantino film, do they? Not when every smug, showy word is delivered with all the prestige of a gift-wrapped masterclass in filmmaking, complete with nods to classic films, winks to the audience and middle fingers to the fainthearted. Throw in some cool music, offbeat humour, iconic character moments and some controversial racist themes, and this film delivers everything you expect - and want - from a Tarantino movie. It is quintessential Quentin. It's Quentinssential.


Onscreen chapter titles, out-of-sequence events and knowing narration all help to add to the air of Tarantino Cool throughout The Hateful Eight, but really, more than any of his previous work, this is a film that is a showcase for its own script. Huge swathes of inconsequential dialogue sit alongside the kind of bristling, impactful monologues that feel ready-made for any number of student actor auditions. And every line gives each well-seasoned cast member an opportunity to really go over the top with their characters.

Samuel L. Jackson gets the most to say and do, hitching a wagon ride with Kurt Russell’s bounty hunter John Ruth and his captive, Jennifer Jason Leigh’s Daisy Domergue, in the first chapter. Then together they pick up untrustworthy goof Walton Goggins before having to stop off at a cabin populated with Tim Roth, Michael Madsen, Demian Bichir and Bruce Dern to wait out a snowstorm. Friction builds and spreads unease as the characters interact with each other and it becomes clear that there is unresolved beef and ulterior motives, before the film takes a surprising turn into murder mystery territory. 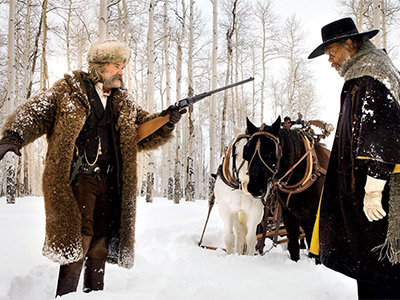 
It may sound like a long whole lot of nothing, but if anyone needed even further proof that Tarantino isn’t just a style-over-substance filmmaker, his script here is a work of art, making for captivating, compelling character exchanges even when they don’t necessarily drive the plot forward. And there’s a ton of great, quotable lines too. Take John Ruth meeting Michael Madsen’s Joe Gage for the first time, greeting the apparently reserved writer with an air of aggression: “Whatchoo writin’ friend?” “The only thing I’m qualified to write about – my life story” comes Gage’s reply. “Your life story? Am I in it?” Ruth asks, only to be met with a sad smile: “You just entered”. Oh god, that’s so fucking cool.

As always with the perma-grinning director though, there’s some controversy at play and, in this instance, it’s in the overuse of the N-word. Again. Discussing the word in the film itself early on, Domergue gets a chiding, but shrugs it off “I’ve been called worse”. It simultaneously comes across as a reaction to criticism of Django Unchained whilst apologising for what’s to come. Because there is a lot of N-wording going on from that moment onwards. 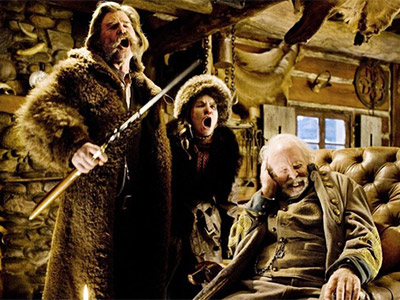 Oh god, no! Staaahp saying it!


The good news is, if you spend all your time worrying about the ethical use of this term, you might forget to question the sight of Kurt Russell repeatedly beating Jennifer Jason Leigh in the face on several occasions until he gives her a black eye, bloody nose and broken teeth.

In all though, it’s a perfectly crafted, locked-room set-up with expert lensing, instantly striking characters and dialogue juicier than the huge number of exploding blood bags that appear in the latter half of the film. It’s Tarantino’s love letter to Westerns of old, to his favourite cast and, most obviously, to himself. Yes, he is a filmmaker in desperate need of a forceful editor or a questioning studio exec or just a general 'no' man, but The Hateful Eight still stands as a remarkable, hugely enjoyable achievement.

You should definitely watch it in 70mm too. Because, that’s important for some reason. Probably.

More:  The Hateful Eight  Quentin Tarantino  Samuel L Jackson  Kurt Russell  Jennifer Jason Leigh  Walton Goggins  Channing Tatum
Follow us on Twitter @The_Shiznit for more fun features, film reviews and occasional commentary on what the best type of crisps are.
We are using Patreon to cover our hosting fees. So please consider chucking a few digital pennies our way by clicking on this link. Thanks!