After years of us all running hot and cold on Ryan Reynolds ("Van Wilder yay! Green Lantern boo! The Proposal yay! Shut up. Er… Green Lantern boo!"), it’s great that the success of Deadpool has now finally shown us once and for all that he is an unquestionably talented comic genius. Now that this has been established, we can look forward to many, many films of Reynolds’ "What the fuck?!"-ing and "I know, right?"-ing in every cinema for several decades to come, safe in the knowledge that this is definitely what makes for a good, quality movie.


This is the point where it sounds like I should lay into this film for leaning too heavily into Reynolds' actually quite insufferable comedy stylings. After all, this set-up, which sees him paired off with - and diametrically opposed to - a cocky, impulsive Samuel L. Jackson is exactly the kind of premise that allows someone to run too far off the leash. But in this instance it actually works. Between a lazy script and predictable story, The Hitman's Bodyguard survives on the performance and delivery of its stars alone. If anything, it could have really done with more Ryan Reynolds riffing. And I don’t say that lightly. Or easily. 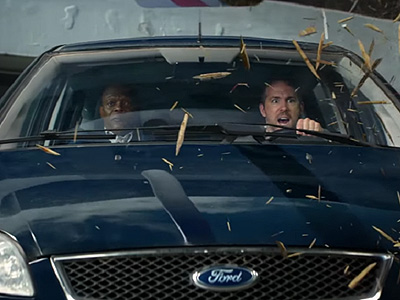 This "car crash" caption would be easier to write if the film was terrible.


Perhaps the key is in the basic concept, which allows Reynolds and Jackson the room to flex their characters in absurd, but entertaining, ways. Reynolds is a by-the-book, super-efficient bodyguard who is down on his luck following a recent botched job on his watch. Once given the task of protecting proficient-but-laid-back assassin Samuel L. Jackson (who just happens to be his long-term nemesis), the pair are at constant loggerheads, with Reynolds frequently frustrated at Jackson trying to give him the slip while both are being targeted by other contract killers hired by Gary Oldman's European despot.

There’s an interesting theme throughout, contrasting order and chaos, with a lesson for Reynolds about not always being able to prepare for everything that comes his way and learning to accept that unpredictability can reap its own rewards. But who cares about any of that when guns and insults are being fired off in all directions, and equal weight is given to both punches and punchlines landing in the right place? Even if that's not always what actually happens. 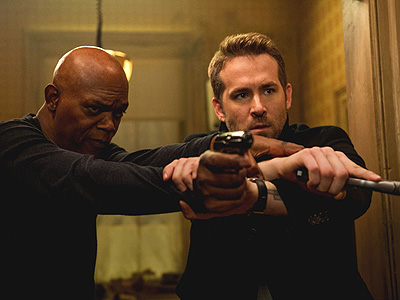 On the whole though, the movie just feels a bit... cheap. It's probably relevant that this film comes from the same production company that brought us Criminal, the Kevin Costner thriller filmed around unglamorous parts of Greater London and curiously also listed Reynolds and Oldman among its cast. There's a similar sense of budget constraints here, with a series of mundane locations and low-profile action scenes filling out a film that feels like it deserves more given its billed leads.

To take a case in point, one long motorbike-chase sequence sees Ryan Reynolds dispatching various henchman while wearing a helmet throughout. When a film doesn't even attempt to CGI an actor’s face over the visage of a far more qualified and accomplished stunt person, you have to wonder if the entire sequence has been written off at some point as a 'cost efficiency' over Reynolds' shooting schedule.

Elsewhere, the film is filled with blindingly-telegraphed gags and shamefully predictable plot turns, and is, on the whole, a largely forgettable affair. But sparking buddy-cop chemistry goes a long way, and there's still much to enjoy. Not least due to - and it really does surprise me to stress this again - Reynolds' famed motormouth schtick. What the fuck? I know, right.

More:  The Hitmans Bodyguard  Ryan Reynolds  Samuel L Jackson
Follow us on Twitter @The_Shiznit for more fun features, film reviews and occasional commentary on what the best type of crisps are.
We are using Patreon to cover our hosting fees. So please consider chucking a few digital pennies our way by clicking on this link. Thanks!