Now that the pallid adventures of K-Stew, R-Patz and T-Lauts are officially coming to an end, welcome to your new Teen Phenomenon Based On A Series Of Books. There's a female lead, there's a love triangle, there's even CGI wolf dogs…are we destined to spend the next few years balking at more inappropriate mum groupies and handmade Hunger Game-themed sex toys? Not so, for this tale is above such cringe-worthy histrionics, delivering surprising substance and maturity, and, as a result, packing more punch.


The story of this first-in-a-trilogy – which sees kids trying to kill each other as part of a tournament – was always going to draw unfair 'Battle Royale gets Twilighted' comparisons. But, while the 12A rating renders any serious violence a tad impotent, there is much more going on here than the fawning and frowning of its soppy vampire peer. A more suitable second influence might be cited as The Running Man. Or even Simon Cowell's X Factor.

Because, for all the promise of bloodshed and outrage, this works rather well as a dark satire on our obsession with fame and celebrity. Stanley Tucci's blue-haired host fake-grins his way through a series of interviews with the kid contestants as they try to win the public over like they're vying for a record deal rather than for their lives. In fact, the whole lead up to the tournament itself plays out like Charlie Brooker's Black Mirror made accessible to teens. A rough-around-the-edges Woody Harrelson and a comically poised Elizabeth Banks even act as the children's mentors for the big event. 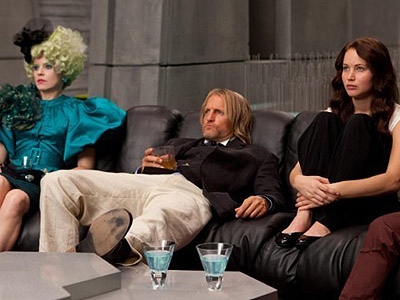 
New big thing Jennifer Lawrence shoulders the film expertly, playing taciturn heroine Katniss Everdeen, a young girl who seems to be the only character involved in The Games that sees the horror in making kids kill each other for entertainment. With her skills as a keen hunter - and handy with a bow and arrow – Katniss soon becomes a serious contender in the tournament, despite having no interest in harming anyone else. Note to Stephenie Meyer: this is what a strong female character looks like – the fact that she is a girl is never even addressed. By comparison, Josh Hutcherson's Peeta – Katniss' fellow homeland contestant – apparently has just one main skill to speak of: painting himself with camouflage while seriously wounded. Thankfully, the romantic subplot that develops between them has remarkable depth – do they really like each other? Is it just for the cameras? What about Katniss' hunkier beau back home?

Director Gary Ross handles all of these plot aspects with a light touch and graciously doesn't overcook the 'look at us as a society – look what we might become!' message. Instead, he crafts a steady, tense story in a naturalistic environment, using lots of shaky cam POV to portray our heroine's disorientation. And for a film set in a distinct future world, CGI is refreshingly sparse, even if silly clothing and ridiculous beards are not. 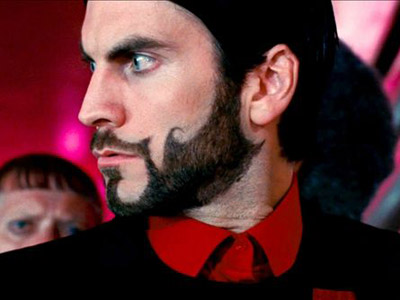 I feel a meme brewing


Unfortunately, in actively defying the glossy blockbuster mould, Ross often mistakes tension for 'time on-screen' as the pace occasionally slips from slow to standstill. And while the killing spree starts off with a shocking, blood-spattered jolt that would suggest lots of adult action to follow, the rest of the film doesn't quite live up to it. Instead, we get mostly cop out kills that undermine the supposedly horrifying premise, very few actual physical altercations and an ending so anti-climactic I was sure someone was going to pop up for a last-minute death-hurrah. Frankly, if I were among the global viewing audience of The Hunger Games, I'd be moaning about the lack of a decent series finale.

The film also unfortunately suffers greatly from the obligatory post-viewing plot-hole realisations. Forgetting that the reasons for these Hunger Games are quickly glossed over (why does the global population watch kids kill each other as part of an open arena blood sport? Because SCI-FI, that's why), several niggling doubts come into play after the credits roll. The chief of these for me is: how can a Truman Show-esque control room render big ridiculous Hulk Dogs on a computer and then just make them appear out of the ground in real life? Where have they come from? What are they made of? More importantly, can't these people feasibly use the same technology to make food to feed the starving population, which seems to be the driving crisis of the film?

Overall, you get the sense that many of these doubts and questionable plot points are probably explained in the book(s) but had to be cut out of what is already an overly long running time. Maybe we'll find out more when the inevitable sequels get a greenlight. It says a lot about how surprisingly well this film turned out that I'm actually looking forward to seeing where the story goes from here. Just not enough to read the books.

More:  The Hunger Games  Gary Ross  Jennifer Lawrence  Josh Hutcherson  Liam Hemsworth  Elizabeth Banks  Woody Harrelson
Follow us on Twitter @The_Shiznit for more fun features, film reviews and occasional commentary on what the best type of crisps are.
We are using Patreon to cover our hosting fees. So please consider chucking a few digital pennies our way by clicking on this link. Thanks!