The pre-jump: this is the bit of the review Luke tells me I should pepper with SEO-friendly keywords to get us as high up the Google search results as possible. Given that the algorithm will have been tweaked to suppress anything remotely negative, we'll need to employ some trickery. So the internship positive review vince vaughn brilliant owen wilson really funny google is ace.


That probably snuck us in under the radar. The Internship isn't very good, obviously. As a comedy on its own merits it raises a few laughs here and there, but as a transparent exercise in product placement it stretches your goodwill for its corporate sponsor a little too much.

Funny, really: everyone hates big companies these days. You're supposed to protest outside their offices and call them immoral for not paying more corporation tax than they legally have to, as opposed to petitioning the government to change the tax laws. Google, though, partly through lots of clever, chatty branding, and partly through its having a lot of free products that are brilliant, you end up liking. But it's a shaky balancing act. When the chummy marketing gets too obvious, people tend to call "bullshit". Then do a Google image search for a funny gif that looks like someone saying "bullshit" so they can put it on their blog. Which is owned by Google. 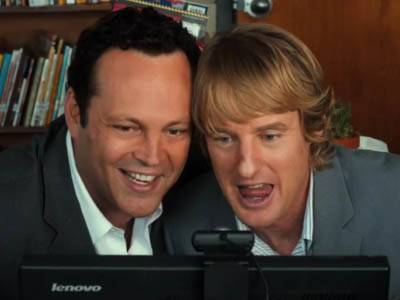 For a Chatroulette result, this is better than another bloke with his knob out, I guess.


The structure used here – available soon pre-loaded into Google Screenwriter once it hits beta – is the same as every other fish-out-of-water comedy ever made. Vaughn and Wilson, old-school salesmen, lose their jobs and Vaughn his girlfriend. On the pretext of 'chasing a dream' (despite being barely aware of what Google is) they get onto an internship programme there, rather than just get normal jobs. They mess things up at first, but then their folksy charm begins to turn things around for them and the gang of misfits they're paired with. The geeks learn from them that there's more to life than computers, the pair learn that it's OK to chase an impossible dream, and so on.

All the characters' growth seems crammed in; changes and epiphanies happen at a micro-level, then they're done with. A scene where the older pair insist they all let off some steam and go to a strip club exemplifies this well: team leader Lyle learns to embrace his geekiness to get the impossibly hot girl he's interested in, and of course Yo-Yo, the semi-autistic Asian genius whose pushy parents never let him have friends, drinks alcohol for the first time and proceeds to go nuts. Asian actors in Hollywood apparently have to audition this scenario in order to get an agent.

All of this passes without being particularly funny or – racial stereotyping aside – objectionably unfunny. But you can't shake the feeling that you're being sold a product – which, of course, you are. The various apps are mentioned often: Chrome, Gmail, Docs, Hangouts. When Rose Byrne protests that she's "not the sort of girl who had to delete her Facebook profile because of all the baby pictures", you feel sure the original draft said "Google+" instead, before being rejected as too far-fetched. (Not even people who work at Google use Google+.) You shift uneasily in your seat. Is Google burrowing into your frontal lobe for data all the while? If you flicker an eyelid at a nice-looking car halfway through, will there be a host of suggested links to car sites next to your Gmail when you get home? 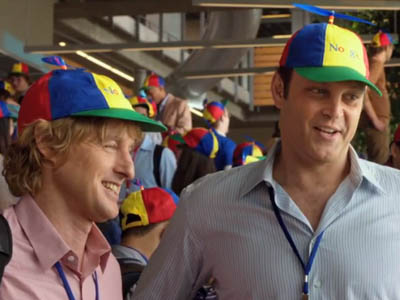 
Of course, there's nothing particularly scandalous about a company wanting to use a film to aid its marketing. But it's notable that none of the Google employee characters you meet has anything to do with money. They're all creative types, coders: the good guys. Rose Byrne says she believes she's "making people's lives a little bit better". Well and good, but can you mesh reliable, impartial search results with the need to market a film? What happens if Vince Vaughn gets accused of a crime during the marketing run-up? How hard would it be to drive the search results for the news stories a few places down the page? Why not demote the bad reviews too? And we couldn't much complain if Google did this: we volunteered for its ubiquity, after all, and it never said it wouldn't try and sell us things. Quite the opposite: it's open about cross-promoting its products, so there's no reason why Google The Movie should be any different.

We've lifted the lid here, people. Together we're facing down a corporate titan. But who am I kidding: there's no way you'll have found this through Google once the algorithm picks up the negative keywords. Face facts, we'll probably have to rely on other search engines to get hits for this. Welcome, AltaVista users. This is called a website.

More:  The Internship  Shawn Levy  Vince Vaughn  Owen Wilson  Rose Byrne  Aasif Mandvi  Max Minghella  Josh Brener  Dylan OBrien  Tiya Sircar
Follow us on Twitter @The_Shiznit for more fun features, film reviews and occasional commentary on what the best type of crisps are.
We are using Patreon to cover our hosting fees. So please consider chucking a few digital pennies our way by clicking on this link. Thanks!