The Iron Lady – from the creative team who brought you Mamma Mia! – is a curious beast; part political bio, part character study, it takes huge liberties in dissecting the professional and personal life of Lady Thatcher, yet fundamentally refuses to pass judgement on any of her policies. The aim was clearly to focus on Maggie the person, not Maggie the larger than life figurehead, but I'm not sure I really see the point of making a biopic on the country's most infamous Prime Minister while never actually bothering with any of her politics. You might as well make a movie on how Fred West was such a talented gardener.


The movie opens with a decrepit Margaret Thatcher (Meryl Streep) enjoying breakfast with her husband Denis (Jim Broadbent in comical prosthetic conk), before it's revealed that – SHYAMALAN TWIST – Denis died years ago and Maggie has been eating boiled eggs with his ghost. Blimey, you think. That's a bit much, given that the old bat is still alive. But you'll continue to slacken your jaw when you realise the entire movie – and Maggie's whole political career – is framed via flashbacks, as reminisced by Thatcher and her imaginary, ethereal husband. It's jaw-droppingly crass, like a cross between The New Statesman and The Sixth Sense. Yes Minister meets Ghost. The Twilight Zone meets The Daily Politics. It's bloody weird. 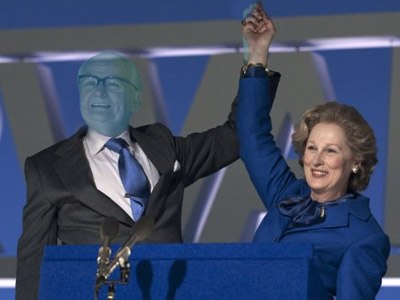 "I couldn't have done it without my imaginary husband!"


All the major moments in Thatcher's reign are present and correct, although the most controversial incidents – the miners' strikes, the poll tax riots and the IRA bombings – are glossed over in musical montages. The Falklands War gets a few extended scenes, during which Maggie looks concerned and people push boats around on a little map, while blurry VHS inserts of wounded soldiers flicker between shots of Thatcher looking pensive. That's as close as The Iron Lady gets to having an opinion. The rest of the time, it's You Go, Girl: The Movie – One Woman's Struggle To Make It In A Man's World.

But while the supernatural angle is way leftfield and the flashback device is a little too convenient, Meryl Streep still manages to make The Iron Lady look polished, even in its rustier moments. Quite how the world's most famous actress can inhabit the world's most famous female politician so effortlessly is a mystery – the voice is spot on, the tics and movement is eerie; the make-up impeccable. Streep just melts away into the performance. How she has any female friends in Hollywood around this time of year I have no idea – the chances of any other actress winning an Oscar is permanently handicapped. 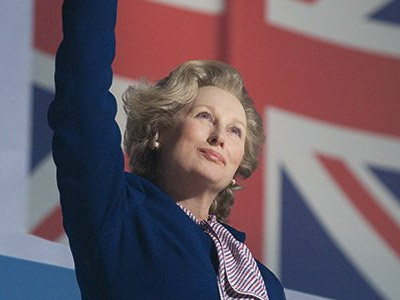 
It's a bit of a shame the men in her life tend to stray towards caricature. Jim Broadbent's Denis – when he's not walking down an eternal corridor made of light – comes across as more Spitting Image puppet than man: half house-husband, half doormat. Maggie' cabinet are really more of an afterthought than a cabal of support; Richard E Grant does nothing but smarm as Michael Heseltine; Anthony Head jitters and jabbers as brown-noser Geoffrey Howe; John Sessions even pops up as Edward Heath to remind us that he's still alive. At least Olivia Colman as Maggie's dippy daughter Carol (wardrobe by Rick Wakeman) has a role of substance.

Such a political firebrand deserves an equally fiery biopic, one that's a little more willing to get its fingers burned in the pursuit of truth. As she stands, The Iron Lady is a misstep – you can imagine why the filmmakers don't want Maggie to see it before she pops her clogs – but even a misguided Meryl Streep remains hypnotic.

More:  The Iron Lady  Meryl Streep  Phyllida Lloyd  Jim Broadbent
Follow us on Twitter @The_Shiznit for more fun features, film reviews and occasional commentary on what the best type of crisps are.
We are using Patreon to cover our hosting fees. So please consider chucking a few digital pennies our way by clicking on this link. Thanks!