A woman near me straight-up cried at this. Call me a burnt-out husk of a man with a tin heart if you will, but I couldn't see what at. Because musical involves the naked outpouring of expository emotion through song, there is a built-in conduit for stirring up this sort of feeling, and its largely comprising big orchestral numbers with powerful maintained high notes naturally raises forearm hairs and moistens eyes too. Where musical really succeeds is in having real heart behind the bombast, though, and there's not enough of it on show in The Last Five Years.


Still, good idea. We begin with Cathy (Anna Kendrick) singing a solo lament to the end of her marriage to Jamie (Jeremy Jordan), then once she's removed the jewellery he gifted her, we begin bobbing around all over the last five years - oh right, I just got that - to catch up to her. They sing-meet; she's sing-acting in Ohio while he sing-stays in New York promoting his smash-hit debut novel; they sing-argue; he sing-complains that it's really hard not to sleep with other women when you're famous. 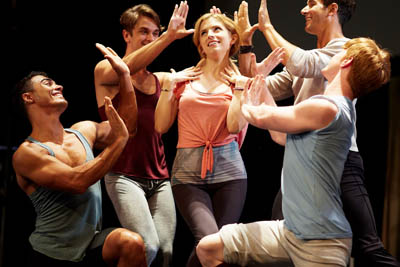 Blimey, she's popular. She could have her pick of these guys. What? Oh.


The chronology is a slight problem inasmuch as the consequences of actions don't become clear until a lot later on, or are shown before the actions themselves. This is no great intellectual stretch; it's just misplaced. Start with the ending and work your way towards it, fine, but I'm not sure the structure of a musical can sustain a lot more tinkering. It means you often don't know where you are emotionally - and musical is supposed to control your emotional expectations throughout - leaving room for disappointment. One song in particular, jumping back to the couple driving out to New Jersey to introduce Jamie to Cathy's parents, is frustratingly stuffed in right as we're nearing the home stretch of their breakup, and only halts our progress.

Only an insane person would dislike Anna Kendrick, of course, and her performance is uncynical; her voice a thing of lovely clarity. Jeremy Jordan is a similarly excellent singer but cursed by what the New England Journal of Medicine identifies as Olyphantitis: the exuding of an unshakeable sense that you're probably a douche. I'm sure he isn't. But he looks like he is.

This works a belter in the scenes where Jamie is supposed to be full of himself and your opinion of him low: he's a young overnight success novelist with New York at his feet, and Manhattan's literati can't get enough of him. But in the scenes where we're supposed to like him and buy into their love - which per the structure might be sandwiched between two scenes where he's a prick, remember - it suffers. 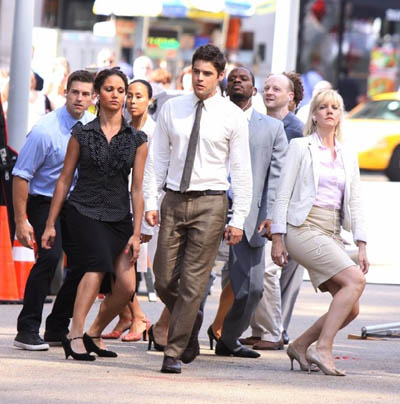 I like to imagine he doesn't know there's anyone behind him.


It's because in musical, the singer you identify with is supposed to be a low-status character. If they aren't, they're just a brilliant person, winning at life, who also happens to be an amazing singer. What a bastard. The singing is supposed to be the plaintive cry of the downtrodden ("Skid Row (Downtown)"), or the first unsteady declaration of love that higher powers won't allow ("Maria"). The wealthy and fortunate lack the romance to sing. The guy you're not supposed to like gets the growly, low-register, comedy song.

That Jamie has to occupy both spaces at once isn't ideal. The absence of a supporting cast (there are a few minor additional players, but no other singers), traditionally there to add colour and savvy, down-to-earth wit the principals are too distracted or lovelorn to provide, also is a missed opportunity, and would've gone a little way to solving this. Everyone knows Riff and Anita are the best things in West Side Story.

When we're brought back to the start there's no great disappointment: we've had fun along the way, and we've mainly enjoyed the songs even without fully absorbing their emotional punches. The examination of the little things that combine to wreck a relationship has been quite meticulous, even, considering the broadness of the medium. But there's the feeling there could've been more.

More:  The Last Five Years  Richard LaGravenese  Anna Kendrick  Jeremy Jordan
Follow us on Twitter @The_Shiznit for more fun features, film reviews and occasional commentary on what the best type of crisps are.
We are using Patreon to cover our hosting fees. So please consider chucking a few digital pennies our way by clicking on this link. Thanks!