The Look Of Love


Once he'd cleaned himself up, 14-year-old me would probably be surprised to learn that the sports reporter on The Day Today ("That was liquid football!") was still around, and a firmly established character whose sayings were now part of the national vocabulary. And equally surprised that the actor so well known for playing him was so capable of leaving him behind when need be.

For there is no discernible Partridge in Steve Coogan's performance as Paul Raymond, and that's a great compliment to him as an actor. He's a rare character comedian who can sink into other roles, even largely dramatic ones like this, without reminding you through voice or mannerism of the characters for which he's best known. 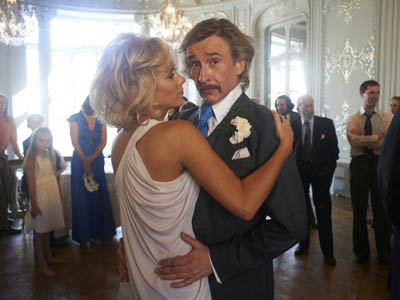 Would you like me to lap dance for you? Uh-uh. I want a second series.


The Look Of Love makes good use of him, too, but ultimately is a largely by-numbers biopic, presenting the events of Raymond's life but offering only in glimpses any reason to care about them. It's presented in a familiar structure: the once-powerful mogul now old and worn out, reflecting sadly on his glory days in flashback. Raymond, who ran Soho strip clubs from the late 1950s onwards and founded magazines like Men Only and Mayfair, prospered despite various clashes with the establishment, whose hypocrisy is prodded here by David Walliams' pervy vicar, constantly turning up at the clubs just to 'keep an eye on his flock'.

It has an obvious parallel in The People vs Larry Flynt, but whereas Milos Forman's film had something to say about free speech and how even pioneering figures can be their own worst enemies at a personal level, The Look Of Love doesn't, particularly. You presume you're going to see Shakespearean overtones - a great man brought low by his own avarice - but, if that's what it is attempting, it doesn't convince. One problem is the film's stance on pornography, which it refuses to judge one way or the other. This is laudable and refreshing in itself, but Raymond's castle is built on porn, and so you expect the film to link his lust to his downfall, if only to provide some sense of cause and effect. Again, it doesn't; it just sort of ... shows you the things that happened.


This shouldn't diminish what is an essentially enjoyable experience, though. There is plenty to like here, not least the performances of the principal cast: Anna Friel is as good an actress as you'll find anywhere, and Tamsin Egerton, playing Fiona Richmond, brings a lot of depth to a role that could've been one-dimensional in the wrong hands. Imogen Poots convinces too as Raymond's daughter, falling deeper into a world of vice from which you feel he should be trying harder to protect her. And there is, of course, plenty of nudity – though few actual sex scenes (certainly not enough to justify an 18 certificate, if you ask me) – with which longtime Coogan collaborator Michael Winterbottom deals without prurient lingering.

But all of this fails to answer the essential question: what The Look Of Love actually is. Though far from boring, it simply presents the events of a man's remarkable life chronologically without much attempt at examining him or his motivations. You could get a similar effect by reading his Wikipedia page with an open copy of Razzle by your side. And just to prove the point, that's exactly what I'm doing right now.

More:  The Look Of Love  Steve Coogan  Tamsin Egerton  Anna Friel  Chris Addison  Imogen Poots  David Walliams  Michael Winterbottom
Follow us on Twitter @The_Shiznit for more fun features, film reviews and occasional commentary on what the best type of crisps are.
We are using Patreon to cover our hosting fees. So please consider chucking a few digital pennies our way by clicking on this link. Thanks!