If you find yourself staring at the marketing for Sony's The Magnificent Seven thinking 'Who is this for?', then you're not alone: I've just seen it and I still don't know. It is an odd choice for such a straight-laced remake, particularly in the current age of the gender swap but PARTICULARLY because the Seven Samurai trope is the most well-worn story in cinematic history, having been remodelled in various forms over the years. We've enjoyed it in ronin form, as a western, told via science-fiction, remade as comedy and even reinvented with animated insects. They say each new generation deserves their own version of all the classic stories, and I daresay the 2016 adaptation of Magnificent 7 is the version this generation deserves: polished but still remarkably unremarkable.


So what's new? Having a black guy, Denzel Washington, as the lead mercenary kinda but doesn't really count as a story subversion, given that it influences very little save for a few funny looks as he rides into town. Although the Seven's ethnic balance is commendably diverse (there's a Mexican guy, a Native American guy and an Asian guy, offset by Ethan Hawke, the whitest man in the world) the band of heroes are predictably macho and relentlessly male. Would it have killed Antoine Fuqua to promote from within and give co-star Haley Bennett, cast here as the pre-requisite non-magnificent damsel in distress who turns out to be handy with a rifle, as one of the team? It'd certainly have made for a more interesting dynamic, unless one of the things you love about cinema in 2016 is tiresome male banter. Chris Pratt embodies here all the worst things about his Jurassic Park bore in one of his smuggest, most self-satisfied roles to date.

Once the initial set-up is dispensed with and twirly-moustached villain Peeteer Saarsgaaard vanishes for literally three weeks, Magnificent Seven races through all of the classic meat and potatoes western tropes in order to get to the final gun battle dessert. There's the 'training the useless villagers' montage. There's the 'working hard to pull together as one' montage. There are several 'you know why you're really taking this job dagnabbit' allusions that you know are going to come good come the final reveal. You quickly get the sense there is a very low ceiling on this movie, particularly on what the characters can do or say: there's little room for improvisation or invention. 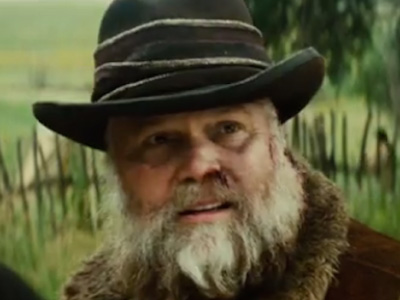 
And then there's the showdown: a cacophonous climax where it seems the only aim was to top Hot Shots Part Deux's body count. It's impossible to know if it's any good or not. It's literally several hundred men getting shot off their horses in slightly different ways. Sometimes they're shot in the head. Sometimes in the stomach. Occasionally they're shot by arrow. Sometimes they fall of roofs. Not once does anyone pull out a lightsaber or burn it over the hill in a Sherman Tank or enter the fray piloting a giant mechanical spider. For shame. It is very much a shoot-out, in the old west, in a movie. Confirmed. Does that sound good to you? Then you'll probably love it.

Look, right, I am a total philistine: I haven't seen the original, nor have I seen Seven Samurai, and yes, my eyelids definitely started to droop during some of the slower scenes, because there are only so many scenes of people reinforcing doors with planks and frightened women holding babies that I can take. But I am a product of my generation: my attention span is OOH SQUIRREL and I need a USP if I'm going to be handing over that GBP. I enjoyed The Magnificent Seven but I've forgotten it already and I'm not even home from the cinema yet.

More:  The Magnificent Seven  Antoine Fuqua  Denzel Washington  Chris Pratt  Ethan Hawke
Follow us on Twitter @The_Shiznit for more fun features, film reviews and occasional commentary on what the best type of crisps are.
We are using Patreon to cover our hosting fees. So please consider chucking a few digital pennies our way by clicking on this link. Thanks!