For all the talk of The Master being a Scientology exposé – the kind which could feasibly cause the very foundations of Hollywood to crumble – Paul Thomas Anderson's sixth feature is instead an intimate, intense character study that's more interested in the dynamic between follower and leader than sharing the secrets of the snake oil salesman. It won't have you calling for the head of Tom Cruise, but it will make you re-evaluate Joaquin Phoenix post I'm Still Here and it will have you longing for PTA movies at a rate of more than one every five years. Woozy, boozy, sleazy and dreamy, it's impossible not to be seduced by The Master – and, indeed, the master.


Narratively speaking, The Master is perhaps Anderson's slightest movie to date. Joaquin Phoenix plays seaman Freddie Quell, a drunken, sex-mad degenerate, who stows away on a ship where he finds himself in the orbit of charismatic cult leader Lancaster Dodd, played by Philip Seymour Hoffman. Both men find one another intriguing: Quell is spellbound by Dodd's magnetic personality and apparent skill in regressing patients back to their past lives; Dodd takes Quell under his wing as a project-slash-pet.

Within this dynamic lies one of 2012's greatest cinematic joys: the energy between Phoenix and Hoffman; the tangled, knotted relationship they share. Early on, aboard Dodd's yacht, he sits Freddie down for an 'auditing' i.e. asking him personal, intrusive questions to see how he reacts. Then Freddie has to answer more questions, but without blinking. Quell, much like a snake being charmed, does exactly what he's told: in minutes, he's fallen under Dodd's spell completely, brutally punishing himself for his failures, tears streaming from his glassy eyes. It is a fascinating microcosm of the entire movie in five minutes, like watching a hypnotist at work. 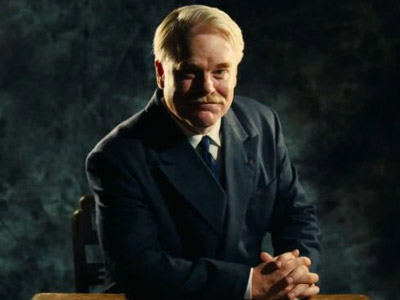 "Look into my moustache."


This exceptional character work elevates The Master above a mere faith-based parable. Hoffman is outstanding: ebullient and effusive, Dodd appears the life and soul of the party, but is easily rattled, Hoffman effortlessly balancing his brio and brittleness. Phoenix is astonishing, playing a man so malleable you'd think he was made from clay: a grinning, gullible simpleton who's simultaneously the stupidest and most interesting man you'd ever meet. Phoenix's physical transformation alone is striking (stooped, hands on hips, contorted smirk on lips), but Freddie's aggressive nature and unquestioning obedience takes the actor to darker places than he's ever dared to venture. Yes, even darker than when he grew that beard, started rapping and got his mate to do a shit on his head.

Happy to let the power generated by the two leads keep his movie humming, Anderson gets on with the task of making The Master look luscious. With Francis Ford Coppola's cinematographer Mihai Malaimare Jr on lensing duty, Anderson captures the luminescence of the 50s on film, with some shots so shimmeringly beautiful you wish could swim in them. Jonny Greenwood's clattering score helps build an atmosphere of gradual unease, the erstwhile Radiohead knob-noodler using every pot and pan in his Big Shed Of Movie Soundtracks to keep you on edge. Right from its first shot - the wake of a ship churning over a crystal blue ocean, accompanied by frenzied violins - The Master has you in its thrall.

Even at 142 minutes long, The Master remains a captivating and alluring film, despite a last 15 minutes that feels a touch superfluous. Curiously, time seems to have no effect on the film: Amy Adams as Dodd's pregnant wife gets no closer to giving birth, despite apparent years passing. There are some who will feel cheated by the film's relative inertia; many who'll be frustrated by its neutral tone; plenty left cold by glacial pacing; perhaps a few disappointed by The Master's lack of resolution. Even There Will Be Blood, a three-hour ode to a megalomaniac's ego, ended with a bloodbath and a resounding, "I'm finished!" There is no such epiphany here. 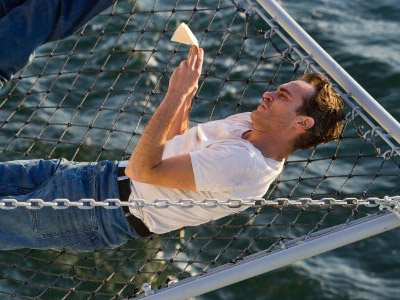 
Less a beginning, middle and an end than a whole lot of middle, The Master has much to digest but leaves more in the way of leftovers to chew on. It may not be a perfect film, but it compels and intoxicates in ways that only the best directors know how. Anderson may not have provided the explosive account of Scientology we all hoped he would, but in focusing on one sheep instead of the whole flock, he's cut to the heart of the issue: the sad, tragic and terrifying lengths that desperate men will go to in order to feel like they belong.

More:  The Master  Paul Thomas Anderson  Philip Seymour Hoffman  Joaquin Phoenix  Amy Adams
Follow us on Twitter @The_Shiznit for more fun features, film reviews and occasional commentary on what the best type of crisps are.
We are using Patreon to cover our hosting fees. So please consider chucking a few digital pennies our way by clicking on this link. Thanks!