The Maze Runner is the latest movie from the sexy-teens-battle-it-out-in-a-dystopian-landscape stable, begging the question: do we really need another one? It's certainly a ripe breeding ground, and based on the evidence seen in Wes Ball's Young Adult adaptation it certainly can't hurt to squeeze another one in, even if The Maze Runner does think a little too highly of how teenage boys would cope on their own. I have an older brother and lived with five lads at university and I'm well aware they literally cannot stop touching themselves. Perhaps that's because back in my day, teen films were all about getting laid; in the future, teenagers have to figure out how to survive in hostile landscapes before they've even picked their GCSE options.


Lack of jacking off aside, the premise of The Maze Runner is an intriguing one. Thomas (Dylan O'Brien) wakes up in a mysterious box, surrounded by a group of jeering lads who are only vaguely more threatening than the Scouts on a jamboree. They all live within the Glade, a lush and green idyll surrounded on all sides by an inescapable maze populated at night by screeching beasts called Grievers. There is no easy way out and no one knows how they got there or why they are there. 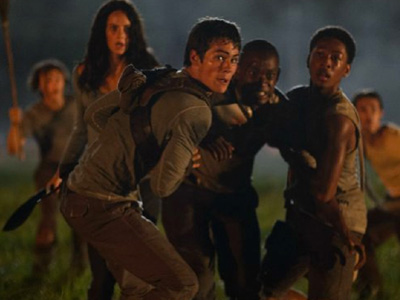 The queue for Mockingjay Part I was getting a little rowdy.


It doesn't take too long to work out that Thomas is a 'chosen one', different to the other 'Greenies' who arrive in the Glade via the box every month. He's impatient and quickly makes plans to become one of the 'Runners', the only ones permitted to enter the maze to look for the exit, before he's even worked out what time breakfast is and where the lads keep their secret stash of jazz mags.

Proving his specialness early on, Thomas manages to best the hulking Gally (Will Poulter) in a friendly knockabout, and becomes the only Glader who manages to survive a night in the maze after only his second day. His heroics are quickly overshadowed by the sudden arrival of a girl in the box (Kaya Scodelario), clutching a note claiming "She's the last one. Ever". If that's not intriguing enough, she appears to recognise Thomas. Things are about to change, boys.

Despite its comparatively modest budget of $34 million (half of what it cost to produce the first instalment of The Hunger Games), The Maze Runner is stylishly shot and director Wes Ball spends the money on his first feature well: considering the story is restricted by the fact the cast are only on one set for the majority of the time, there's a real sense of scope and depth, particularly in the maze itself, all at once massive and oppressive but also claustrophobic. Ball also remains faithful to the book in embracing its dark side: the monster scenes are tense and scary without relying on shock jumps, and in particular a banishment scene where one poor Glader is forced to leave to face the poisonous Grievers is genuinely unsettling, on a par with the similarly bleak Lord of the Flies.

If the modern age has given teenagers a short attention span then in this case it's not wholly a bad thing: the whole film is tightly plotted, balancing the dynamics and politics of the Glade with enough tense action every 15 minutes or so meaning it very rarely lags.

The race-like nature of the plot however does mean there's little in the way of character development: Gally is a much more rounded character than he is in the book, but is still little more than a bully who dislikes Thomas and wants to keep order in the Glade. The arrival of Theresa, the only female Glader, is meant to act as a catalyst to change but she just rocks up and wanders around for a bit without really contributing much. Perhaps as a sign of a post-feminist society the boys are generally respectful towards the first female they've seen in 3 years (no lad bants here), and refreshingly she doesn't have to act like a boy in order to gain respect or be heard. However, because everyone has memory loss there's not much room or time for anyone, including Thomas, to develop much beyond their one-dimensional archetypes. 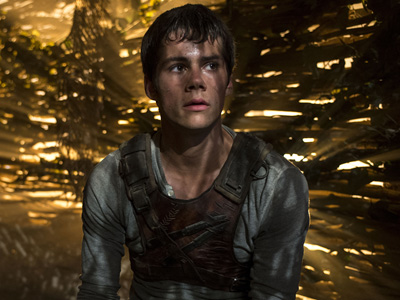 
One lazy story-telling device which really winds me up however is the idea of latent memories holding the key to everything – without Thomas' dreams and an extremely specific set of events you wonder how the Gladers would have ever have got to the film's quasi-resolution as they get closer to uncovering the secrets of the maze. It's a real niggle, and key parts of the book have seemingly been eschewed for no good reason which would have made this a bit less grating.

Much like Divergent, there's a promise of a big reveal if you keep watching the sequels, and like Divergent the original story is a trilogy, so there should be at least another three movies to come. It's frustrating having to wait for the next instalment to get answers to some big questions. However, it's not often you can say about a modern film that it actually feels 'like a proper film', but The Maze Runner definitely does; reminiscent of 80s classics such as The Goonies or Labyrinth, and even to a certain extent, the more recent Guardians Of The Galaxy.

What is lacking is a touch of humour – there's a great sight gag at the end, which hints there could have been some lighter touches, which would have elevated The Maze Runner above its YA peers. As 'yoof' films go though, it's an entertaining watch and doesn't take too much investment. And there's not a soggy biscuit in sight.

More:  The Maze Runner  Wes Ball  Dylan OBrien  Thomas Sangster  Will Poulter  Aml Ameed  Kaya Scodelario
Follow us on Twitter @The_Shiznit for more fun features, film reviews and occasional commentary on what the best type of crisps are.
We are using Patreon to cover our hosting fees. So please consider chucking a few digital pennies our way by clicking on this link. Thanks!