The Pirates! In An Adventure With Scientists

There are two things guaranteed in this life: 1) Hugh Grant is so debonair he could charm the pants off a concrete nun, and 2) No one does animation quite like Aardman. Put these two sure things together and it's no surprise that The Pirates! In An Adventure With Scientists is the first truly great animated film of the year: a painstakingly-modelled laugh riot that boggles the mind while tickling the funnybone.


From the very first scene - in which the camera pans back to reveal the location sign is being held by a character who can't resist getting his face into shot - The Pirates! is unmistakably Aardman. It's got their fingerprints all over it - it's a shit joke, but it's true. From the impeccable facial animations (nobody can convey as much emotion as Gromit can with one eyebrow) to the cute in-jokes and the clever short-cuts (foaming ale appears to be cotton wool), there's no doubt you're back on familiar ground, and it's comforting to know you're in such talented hands. 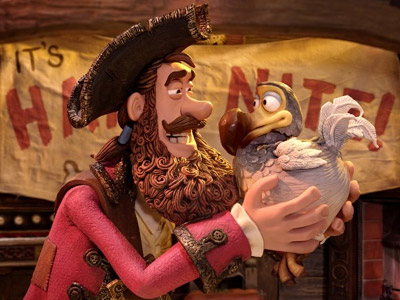 Note the lack of 'DreamSmirks'.


To my knowledge, this is the first Aardman film to be adapted from a book. I can't claim to have read the series by Gideon Defoe - not being six and permanently sticky - but if it has even half the luster that Peter Lord's version does, it'll send your kids into hyperactive overdrive. The playful script is witty, smart and delightfully grotesque at times - imagine a Horrible Histories take on piracy and you won't be far wrong. It feels resoundingly British: only our great nation can take such pleasure in the immaturity of words like 'bum' and 'thingy'.

Even though it'd take a team of about fifty professional modellers about six months to actually capture it frame by frame, this is animation with a swagger. Hugh Grant's Pirate Captain is a cocksure fellow who oozes with confidence, and the movie shares that belief in its own brilliance. You'll gawp at action sequences that must have taken years to animate, and be grateful that at no point did anyone at Aardman think, 'Fuck it, we'll just CGI that bit'. This is a creative team that take pride in their work and hold themselves to the very highest standards, and The Pirates! is a reflection of that tireless, perfectionist ethic. 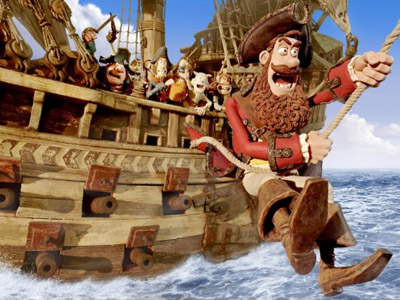 
Technically, it's near-perfect - in that way that an archaic medium like hand-animation can be. Thankfully, it's damn near faultless in comedic terms too. There's a delicious air of absurdity about it; Grant's scourge of the seven seas has a great affection for his parrot, Polly (clearly a Dodo), which he hides in his luxurious beard. When considering jacking in the piracy lark, he briefly considers a career in lingerie. There are gags here that will doubtless go over the heads of the knee-high, but more's the pleasure - there's a hint of Monty Python about such silliness for silliness' sake.

Not all of the humour has sea legs - a mute monkey butler feels like a ten-year-old Simpsons joke, while Ashley Jensen's Surprisingly Curvaceous Pirate doesn't serve any purpose - but the rate is quickfire and the animation so sparkling there's no time to notice. If you can find fault in a movie that makes time for Brian Blessed as an Elvis pirate AND a Flight Of The Conchords song, you're watching films wrong.

More:  The Pirates In An Adventure With Scientists  Peter Lord  Jeff Newitt  Hugh Grant  Imelda Staunton  Martin Freeman  David Tennant  Brian Blessed  Salma Hayek  Jeremy Piven
Follow us on Twitter @The_Shiznit for more fun features, film reviews and occasional commentary on what the best type of crisps are.
We are using Patreon to cover our hosting fees. So please consider chucking a few digital pennies our way by clicking on this link. Thanks!