The Raven is a fairly neat concept in theory. A down and out Edgar Allen Poe (John Cusack) is hired by old-timey police to solve a series of grisly killings based on his own macabre stories. There's a little bit of Saw, a touch of Basic Instinct and even a smidgen of Sherlock Holmes in the screenplay; it's equal parts gothic horror, murder mystery and action adventure, just a few doors down From Hell. It's not a bad idea, but that description probably makes it sound a little more exciting than it actually is – for all its shadowy intrigue and booze-tinged whimsy, The Raven is a story that even Poe would admit needs a few rewrites.


V For Vendetta director James McTeigue draws on his experience of shooting period pieces to lens an authentic if drab-looking 19th century Baltimore, with Cusack playing Poe with curious restraint. The Raven is well shot, well lit and admirably acted, but it's strangely reserved. Poe – a legendary lush and partaker of his fair share of illegal substances – is played here as a part-time alcoholic and lovesick puppy, chasing after Alice Eve's be-jugged maiden, whose kidnap becomes his motivation to match wits with the murderer. If you think that these don't sound like the actions of one of literature's true wild men, you're not wrong. The mind boggles when you think what an on-form Cage could have done with it. 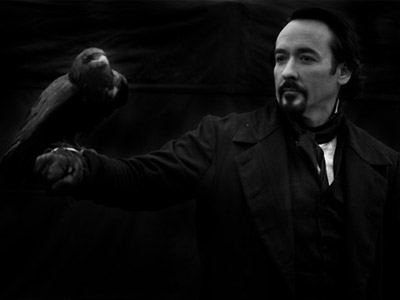 
The murders are shocking, but are rarely seen on screen. The deaths you do see are grisly, but the blood is CGI. Who exactly is being protected here? The best set-pieces are naturally those based on Poe's terrible tales – even if the 'Pit and the Pendulum' swinging saw-blade has been done to death – but McTeigue seems to be holding back the really gory stuff, perhaps hoping that he could moderate the horror and reshape it to a more profitable age rating. It wasn't to be: The Raven is rated 15, and to be quite honest, would probably bore most pre-teens senseless anyway.

Thankfully, the mystery itself just about sustains adult interest. Cusack at least looks like he's trying (which is more than can be said about 2012), taking a break from the brotox so he's able to furrow his brow when required, while Luke Evans does good work as the detective on both the murderer and Poe's case. Alice Eve isn't required to do much other than squeeze into a corset and fear for her life (unrelated acts, I should mention) and you suspect McTeigue could have easily made The Raven without a love interest. And possibly without Poe's pet raccoon Carl, too. 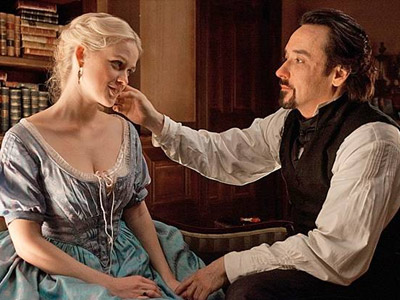 "I love you, love interest lady."


The Raven does little to mark itself as anything but average, frequently resting on genre clichés like the creepy villain who licks his lips (a detail that's forgotten come the big reveal). That's the same highly intelligent antagonist and equal of our hero who nonetheless comes within a swish of his cape of being caught and killed several times throughout the story, which would sort of render his devious plan a bit crap. He's no Moriarty, let's just say that – Sherlock Holmes comparisons are not favourable at all. I found it helped if you imagined just what Sylvester Stallone might have done had he got his hunks of ham on Poe's penmanship as planned.

The Raven is a movie with its wings clipped; a murder mystery that feels strangely subdued. It's enjoyable enough in the moment – even the eye-poppingly anachronistic end sequence, which feels like a Dragon Tattoo cast-off – but with precious few memorable moments and dialogue that might as well have been written in invisible ink, The Raven is destined to be a footnote in Edgar Allen Poe's filmography. The concept is sound, but unlike the author's best work, the execution is lacking.

More:  The Raven  John Cusack  Alice Ave  Luke Evans  James McTeigue  Edgar Allen Poe
Follow us on Twitter @The_Shiznit for more fun features, film reviews and occasional commentary on what the best type of crisps are.
We are using Patreon to cover our hosting fees. So please consider chucking a few digital pennies our way by clicking on this link. Thanks!