Now that everything is at least 140 minutes long, I applaud any film that does its thing for an hour and a half, gets the job done then fucks off home. The content of those 90 minutes is irrelevant really. It could be a dead goose for an hour then a man eating a Bounty for the rest. So well done, The Salvation, Danish western that you somehow are, for not hanging around too long. And for being generally all right in a forgettable sort of a way, too.


Odd sort of a mish-mash, really. On one level you can't really understand why Mads Mikkelsen is a Dane in the Old West, much less what Eric Cantona is doing there. Aha, you think. It must be to imbue the most quintessentially American genre there is with a European aesthetic. If only I knew anything about European cinema I'd be well on my way to comparing this cleverly with something else and looking like I knew what I was doing. But it doesn't seem to do much in the way of setting itself apart. There are horses and guns, and an ill-tempered bad guy who doesn't observe the unspoken code of only shooting people when you're supposed to (ie they shot at you first or they're a Native American). Plus there are some nice sandy mesas in the background, so you're all set. 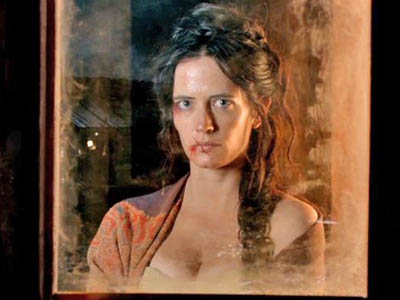 Come on, you can't do a mirror selfie without duckpout. Put some effort in!


Then something else happens: Mads cries. Like a girl. Now, the bloke's wife and son have been brutally murdered, his having only just been reunited with them after several years, so fair enough, but it's here you see the European influence. John Wayne wouldn't have cried. He'd have chewed a cigar, silently buried his family and shot a guy at the wake for watering down his sippin' whisky. This isn't how we do westerns: they're supposed to represent pure, unreconstructed American masculinity. Like Top Gear, and just as racist.

Clearly Mads hasn't read the script, the lanky berk. The murders happen near the start as the culmination of the film's best scene, a tense carriage ride with a couple of obvious no-goodniks, who goad his family and try to rape his wife. The advantage keeps switching from one party to the other, foreshadowing what's to come later. His revenge comes quickly enough, and it's written itself thin after only a little while. The man he killed has a brother who is a big-deal villain, so there's more revenge to revenge. Half an hour in and it seems to have nowhere to go.

It doesn't, either, but it finds its way out successfully enough. Not through anything especially clever; just some well-staged shoot-outs, an amiable side turn from Jonathan Pryce, and the fact that Eric Cantona is still in it. If there's an Academy Award next year for being Eric Cantona he'll definitely be in the running, but he mainly just glowers and says a funny thing about Germans. It's welcome enough. 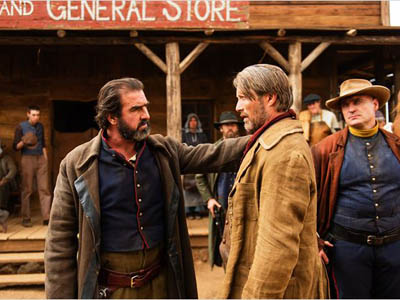 
Alongside all his European nancying, there is a resolve to Mikkelsen's character, brought about by his having fought in what must have been the Second Schleswig War. He takes a lot of punishment and never gives in, and in a Dane doing this in the face of American aggression, even after he's expressed his emotions and you've felt his loss, there's a pleasing little subversion of the western. It doesn't extend much further than that, though: it would've been good to see the European influence justify greater roles for the women, who are largely just supposed to shut up and get raped (literally in the case of Eva Green's character, who has no tongue). But I was home by nine, and if you have better criteria than that by which to judge a film then I'd like to hear them.

More:  The Salvation  Kristian Levring  Mads Mikkelsen  Eva Green  Jeffrey Dean Morgan  Eric Cantona  Mikael Persbrandt  Douglas Henshall  Michael Raymond-James  Jonathan Pryce
Follow us on Twitter @The_Shiznit for more fun features, film reviews and occasional commentary on what the best type of crisps are.
We are using Patreon to cover our hosting fees. So please consider chucking a few digital pennies our way by clicking on this link. Thanks!