Like flamethrowers and tax rebates, sharks are undeniably awesome. They are vicious, yet magnificent predators wrapped in a mysteriously dumb, dead-eyed outer-shell. Like Vin Diesel, but with fins. So making movies about sharks is a no-brainer; with Great Whites growing to 20ft long and weighing up to 5000lbs, they can be a formidable foe. And the Great White - or Carcharodon carcharias - of this film is every bit as terrifying as the ones in the many shark documentaries I have watched.


Here's a fact you might not know: Great White Sharks have around 300 teeth, all arranged in rows. The outer two rows are used for biting and the inner rows move forward to replace any teeth that get lost. It's this mighty mechanism, evolved over thousands of years, that surfer Nancy (Blake Lively) is really contending with in this film. In a relatively short space of time, the stage is set: the ferocious animal has attacked and chomped on Nancy's leg, leaving her stranded on some rocks (off the shore of a secluded 'secret' beach - perfect feeding ground for the Great White) before sticking around ready to finish the job, circling her in his instinctual stalking patterns. 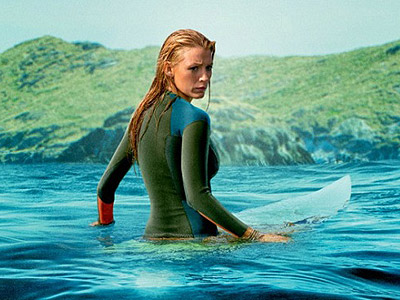 Yes, of course there's something in the water. Don't you EVER watch the Discovery Channel?


Luckily, thanks to her background medical training, Nancy is able to tend to her injuries in a resourceful manner and then, for the most part, she lays in wait hoping for help to eventually come. It's a sensible move because, with an ability to smell blood from 1/4 mile away, that shark will be gunning for her the moment she dips her injured leg back in the water.

That's not to say that the film slows down though; a high tide of tension is maintained throughout the film as Nancy attempts several times to get to safety, and this is then broken with unexpected jumps and shocks that all showcase this majestic beast's breath-taking predatory nature. In fact, despite Nancy being stranded in one spot for almost the entire duration, the film never feels like it stops moving forward, much like the Great White itself, which has to keep on constantly swimming or it will die. 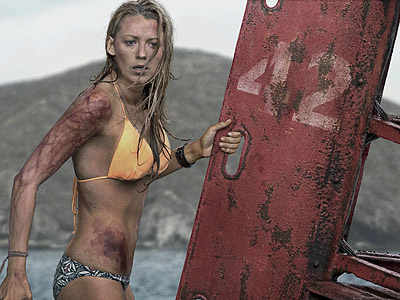 What is this, a bikini documentary? Where's the shark!


For the most part, the thrills and gills of the film are all very much grounded in reality, with adrenalin rushes coming in the form of literal swimming pursuits, made all the more perilous due to the Great White being able to move at speeds of up to 35mph in short bursts. But where it mostly plays out as "Jaws for the next generation", the action escalates into some slightly more ludicrous scenes at the movie's climax, with the film veering closer to Deep Blue Sea's territory.

Still, it's hard to argue with a film that remembers to deliver entertainment as well as tension, and brief flickers of humour (often involving her rock co-habitant "Steven Seagull") help to keep the film ticking along. It's certainly a lot funnier than the documentaries I watch anyway, which helps to make up for all the facts that this film conveniently leaves out, like how sharks often fly around in tornados and attack people in shopping malls.

More:  The Shallows Blake Lively  Jaume Collet-Serra  Sharks
Follow us on Twitter @The_Shiznit for more fun features, film reviews and occasional commentary on what the best type of crisps are.
We are using Patreon to cover our hosting fees. So please consider chucking a few digital pennies our way by clicking on this link. Thanks!