Murder mysteries exist in a weird sort of critical stasis while you're watching them, because any story that hinges on an explosive final act reveal floats in limbo until it has shown its hand. Such a reveal - a surprise identity, a killer motive, a shock twist - may cause you to reassess everything you've already seen. The best films of the genre do just that: they cleverly subvert what you think you saw, fill in plot gaps you didn't know were there and, like a smug serial killer, flaunt the fact that they've been one step ahead of you the whole time. Yeah, The Snowman does not do any of that. You watch attentively and wait patiently and cross your legs and twiddle your thumbs but come the crushingly disappointing final act, the only dawning realisation you have is this: The Snowman is a bad movie and it turns out it had been all along. Twist!


I'm not familiar with the Jo Nesbo book upon which Tomas Alfredson's adaptation is based, but the movie version plays like an extremely broad Nordic noir parody, or at the very least a join-the-dots handbook for the genre impaired: Scandinavian Crime Drama for Dummies. Michael Fassbender plays Harry Hole, a grizzled, knitwear-sporting homicide detective in a small snowy town who gets results despite being a chronic alcoholic and has a complicated relationship with his ex-girlfriend who still wants to fuck him. I mean: COME ON. If you forced me at gunpoint to write a synopsis for a crime thriller set in Scandinavia in ten minutes, it'd literally be exactly that, except maybe the lead character's name would be 'Stig' or 'Bjorn' or something.

Fassbender is capable of elevating even the duffest material but he has a thankless task as Harry, a murder police who through the course of the movie is revealed to have no discernible skills and does very little actual detective work - at one point the killer even taunts him, saying "I left you all the clues", a slight hint of frustration in his words as he realises his murderous masterpiece is being investigated by an idiot with a hangover. To be fair, Harry was probably thrown off the trail by the movie's judicious editing (Thelma Schoonmaker's name in the credits being the sole reminder this was once a Martin Scorsese prestige project), a right royal carve-up of which the killer would be proud. Plot threads are left dangling, suspects are wiped off the face of the planet and the fate of one main character is left hanging in the balance. None of the set-up is particularly interesting but you still get a sense it's building towards a crescendo. Nordic narrator: it wåsn't. 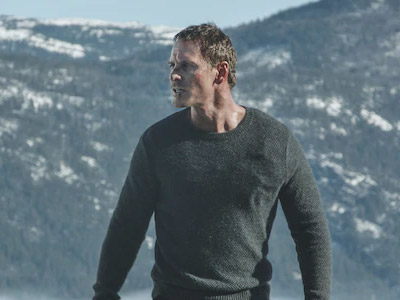 "Put a coat on, Mister Police: you might... CATCH YOUR DEATH."


Worse, The Snowman features a series of bizarre plot points which are intended as fun quirks but distract from the otherwise stone-faced story. Murder scenes are always accompanied by the killer's audio calling card, the song 'Popcorn', which is obviously entirely hilarious; Chloë Sevigny plays identical twins, a pointless reveal which led to hoots of laughter; the detectives carry around massive and conspicuous iPad-style evidence gatherers that look like 80s car phones, despite other characters carrying iPhones; even the central motif has no deeper meaning - it's just a bunch of goofy snowmen that are meant to read as sinister but end up giving you the giggles.

And then there's Val Kilmer's contribution. Oh boy. First, some context: Kilmer was diagnosed with throat cancer in 2015 and more recently had an operation to remove a tumour, leaving him with a swollen tongue and unable to talk clearly. Presumably, as a show of good faith, director Alfredson didn't recast him, but instead dubbed his lines (badly) with another actor and has other characters deliver his exposition on his behalf, mostly while Kilmer just stands there. It's quite an astonishing misjudgement on Alfredson's part, perhaps indicative of a film that started to get away from him and couldn't be reined back in. If only Kilmer was the only man miscast: Toby Jones is a great actor whose character has three lines, two scenes and no name, while Line of Duty's Adrian Dunbar plays a businessman who hails from Norway by way of Northern Ireland. It's all so relentlessly, needlessly dunderheaded.


Anything positive to say? Anything at all? Hm. The Snowman features some cracking bridges, really wonderful bridges, some of the best bridges you'll see on film all year. Unfortunately it also features one of the most aggressively underwhelming and botched endings in modern memory, where terrible editing leaves the final confrontation unintelligible, underlying character motivations are literally read aloud and the terminally stupid killer is vanquished by a deus ex machina. But yeah, great bridges.

More:  The Snowman  Tomas Alfredson  Crime  Michael Fassbender  Rebecca Ferguson  JK Simmons  Val Kilmer  Chloe Sevigny  Charlotte Gainsbourg  James DArcy
Follow us on Twitter @The_Shiznit for more fun features, film reviews and occasional commentary on what the best type of crisps are.
We are using Patreon to cover our hosting fees. So please consider chucking a few digital pennies our way by clicking on this link. Thanks!