The Trip to Italy

Impersonations are the work of the unfunny, slightly creepy guy you don't want to get stuck next to at the works do, as anyone who has heard my Nelson Mandela will confirm. Rob Brydon and Steve Coogan do them constantly throughout both seasons of The Trip not, I think, because that's what they revert to when improvising with each other, but because it suggests that they are slightly tedious company in real life, while simultaneously being funny to watch. Which seems to me pretty much the whole point.


It's come on a lot, this whole comedy subgenre of playing a version of yourself. Extras allowed stars to be transparently daft caricatures, poking fun at themselves with no real danger of the audience mistaking what they saw on screen for the real thing. Curb Your Enthusiasm did (does?) more or less the same with a slightly crueller edge. Episodes lets Matt Le Blanc push the boundaries a bit, showing him as a vain, selfish womaniser jealous of his Friends co-stars' success. Louie lets Louis CK show the life of a jobbing stand-up with elements of his own life woven into a fictional narrative. 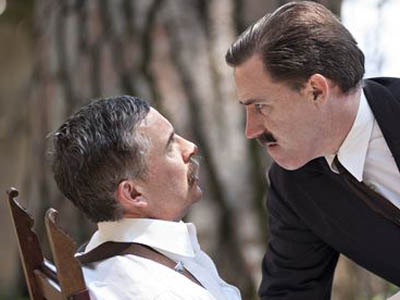 "His name was Fernando Partridge, and this is for you!"


It gets potentially problematic in the case of Stewart Lee, whose stand-up act and Comedy Vehicle involve playing an embittered version of himself who only wants the "right" sort of audience to come to his shows. The character has the same name as him, makes reference to events in the real man's life we know to have happened (TV shows, awards), and is overeager to convince us of how much charity work he does. It dares you to mistake the character for the man, and part of the thrill is not quite knowing where the line is. Many take it at face value, thinking they're being berated for showing up, and can't be wholly blamed for it, in truth.

The Trip treads the same sort of line, albeit with the backdrop of a loose fictional narrative, so you generally know it's not for real. But Rob Brydon and Steve Coogan play with their public personae in a similar way: the former the light entertainer, the latter tetchy, self-regarding, and not quite as big a star as he thinks he should be. As per the first season, The Trip to Italy sends them off on a plane with the minimum of preamble, and structures each episode around a restaurant they're reviewing. Then they talk to each other, which is at least semi-improvised, and do impressions. Lots of impressions. 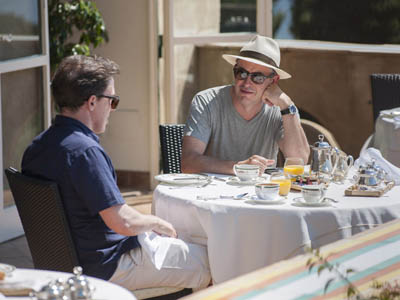 They seem to almost like each other this time.


These serve to show us that their relationship is a sort of endless jousting match, each wanting to out-impersonate the other, particularly when they each land - again and again - on Michael Caine and Roger Moore. These are very funny; Coogan's Morrissey impression in the first episode had me rewinding the iPlayer about five times. But they also grate after a while, and are probably supposed to - because the characters are middle-aged men, a little too successful and pleased with themselves, but not fulfilled by celebrity and taking solace in being able to make each other laugh in the simplest way possible. This trip is a retreat in both senses, tanned berry-brown with pathos, never more so than when Brydon confesses an infidelity to Coogan's assistant Emma, but can do so only in Hugh Grant's voice.

And this is how it works: taking two stars whose work you probably enjoy, suggesting to you that they're not all that nice in person (Coogan resents Brydon's affable charm and can't congratulate him properly on landing a film role; Brydon cheats on his wife, though director Michael Winterbottom rather lets the character off the hook by not juxtaposing this with any scenes of his family life this time around), and still inviting you to laugh with them. It works, but it makes you work for it.

More:  The Trip  The Trip To Italy  Rob Brydon  Steve Coogan  Claire Keelan  BBC
Follow us on Twitter @The_Shiznit for more fun features, film reviews and occasional commentary on what the best type of crisps are.
We are using Patreon to cover our hosting fees. So please consider chucking a few digital pennies our way by clicking on this link. Thanks!