"Want anything from the shop?" For fans of Shaun Of The Dead and Hot Fuzz, there is only one answer to that question, such is the cult cultural impact these films have had on the collective film nerd consciousness. And now, here we are with the conclusion of the so-called Three Flavours Cornetto Trilogy in the offing and the pressure is on. This is basically as eagerly awaited as the never-going-to-happen third series of Spaced. So would we like anything from the shop? Yes, we'd like a film that's just as sharp, funny and quotable as the previous two instalments, please. Thankfully, Edgar Wright and Simon Pegg have returned with just what we asked for.


Of course, not everyone will agree. While many will argue the virtues of Hot Fuzz over Shaun Of The Dead and vice versa, this is once again a Cornetto Trilogy movie of an altogether different flavour. Wright, Pegg and Frost make a welcome shift from comedy-horror and comedy-action to comedy-sci-fi as a closer for their much-loved collaborative output and, as before, your ranking of this film compared with the others will be as affected by your taste for the genre as your opinion of the script.

Luckily, Wright and Pegg's screenplay here is completely up to scratch with their previous efforts. While the gags don't flow as thick and fast as before, room is made for some heartening character moments and a fitting sense of nostalgia for 'the good ol' days' when you were young, care-free and capable of drinking 12 pints without getting a three-day hangover.

Simon Pegg's Gary King provides the thrust of the plot, getting together his old group of mates to re-attempt the 'Golden Mile' pub crawl of their youth. Brilliant punchlines are delivered early on at the expense of King's life having not moved on one jot since they were all kids, but the film really kicks into gear once the sci-fi element is established and everything goes "fuck up". 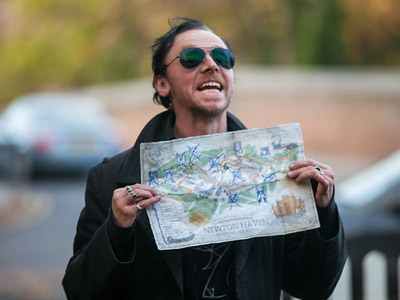 This is the plan that everything does not go according to.


From then on, we are treated to remarkable special effects, superb gags and fantastically choreographed, frenetic fight scenes. Although, you'll have to shrug off our main characters' implausible adeptness for ninja-like tussling with a "It's an Edgar Wright movie, and we wouldn't want it any other way".

There are plot niggles along the way - the friends' casual disregard for each other's safety being chief among them, as well as the only explanation for their continuation of the pub crawl in the face of imminent danger being "well, no one else has a better idea".

But otherwise it's all pretty tightly plotted stuff. The opening flashback serves as a taster for things to come and, while this kind of foreshadowing was adopted much more subtly and cleverly in Shaun Of The Dead in order to reward repeat viewings, we're wise to Wright and Pegg's game here. There are plenty of expected nods, welcome cameos and the occasional running gag to remind you that this is all still part of a loosely cohesive whole, but overall, the film is as funny and original as Wright and Pegg's previous efforts, even if time and familiarity with the pair's comedy stylings has rendered it not quite as fresh. 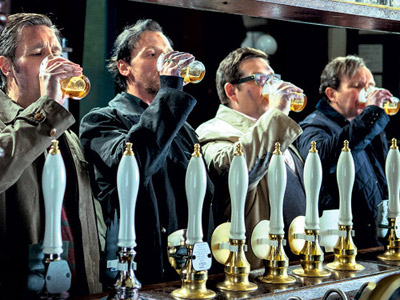 It will also make you really, really thirsty.


If anything, the real surprise here though is Simon Pegg, who gives what may be the best performance of his career. Playing outside his comfort zone as Gary King, who is basically an utter dick, Pegg jumps from forceful banter to empty excuses, but there's always an underlying melancholy to his act. King is essentially a man depressed that everyone has moved on from the time when he was the legendary school rebel, and he chases after every distraction he can find rather than dwell on the sad truth of his circumstances.

It's a relatable predicament, particularly for a generation that found a kindred spirit in Spaced's Tim and have had to come to terms with the fact that a third series shouldn't ever come to pass because we're now all that much older (incidentally, this is the same generation that will get an almighty kick out of this film's 90s Indie soundtrack). But Pegg balances the tragedy with the comedy in this character, providing almost all of the best lines, while keeping a sad honesty in reserve for the film's impactful tender moments. 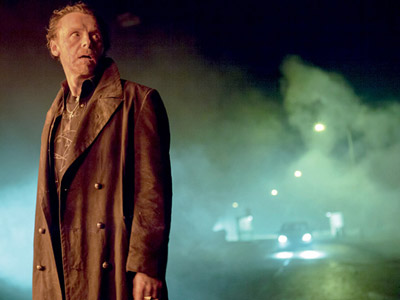 
The supporting cast are all on top form too, with only Rosamund Pike stuck in a somewhat thankless token female role. Each gets more than one moment to shine, with Eddie Marsan and Martin Freeman providing particularly memorable highlights, and Nick Frost impressing with a decidedly more nuanced best-buddy role.

It’s a decided shame that the ending feels slightly anticlimactic, but this is a common problem with films that have a mysterious sci-fi element to them. In keeping us in the dark as to what exactly is at the heart of the supernatural threat, expectations are high for a satisfying conclusion. In this case, we get the explanation of an entirely original premise but it’s one that ultimately feels a little too thin for the overall plot and the ensuing jeopardy. But then this climactic scene also provides for some of the film’s most quotable lines, including one which is this movie’s answer to Hot Fuzz’s "jog on!", so it’s hard to complain.

Overall, the film is a worthy instalment to round off the trilogy, one that is at least on a par with Hot Fuzz. It misses Shaun Of The Dead’s pinpoint plotting and ends on a somewhat confused epilogue sequence, but overall it’s slick, funny and great fun. Only an obstinate fanboy will claim the film to be a disappointing fit with its predecessors; someone who, like Gary King, hasn’t moved on in the past 10 years and has unrealistic expectations as a result.

Incidentally, this is also the kind of person that asks you to get him a Cornetto from the shop and will argue at great length as to which flavour is the best. Hint: They’re ALL good.

More:  The Worlds End  Simon Pegg  Edgar Wright  Nick Frost  Cornetto Trilogy
Follow us on Twitter @The_Shiznit for more fun features, film reviews and occasional commentary on what the best type of crisps are.
We are using Patreon to cover our hosting fees. So please consider chucking a few digital pennies our way by clicking on this link. Thanks!