I’m getting old. Nights of drinking snakebite and being 'that guy' picking up guitars at house parties have been replaced with evenings of visiting friends with new babies and picking out paint samples with my wife. Before long, I’ll be chatting to perfect strangers at bus stops, marvelling at how Easter has come early this year. My only hope is that, while my body gradually deteriorates and I slowly chip away at the planet-sized boulder that is my mortgage, I can still find time to occasionally be just like Paul Rudd.


It may be 10 years hence from where I am now, but this is basically the gist of This Is 40. It's a film with very little plot but scene after scene of middle-age complaints. Marriage stuck in a rut? Kids being a handful? Cholesterol levels high? Financial worries? Sagging boobs? Haemorrhoids? This film has it all covered in an honest, open way. Thankfully, it also has a huge cast let off the leash to improvise their way through these issues in the funniest way possible.

Continuing the fine tradition of nobody wanting to be married to Leslie Mann, This Is 40 picks up the story of Knocked Up's Pete and Debbie a few years down the line. Resigned to a daily routine of school runs and work struggles, the pair hit a bad patch in their marriage and try to work out if they actually still love each other or are just used to being together. 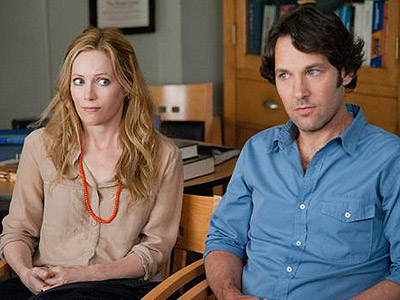 They don't know the answer. Their script just says 'WING IT'.


Predictably, the Knocked Up connection is moot – these just happen to be many of the same actors playing similar characters given the same name. Also, for all the moans and life grumbles explored here, we're still on familiar Apatow territory, meaning that Rudd's work problems involve him trying to maintain his own independent record label while he rubs shoulders with the likes of Graham Parker and Green Day's Billie Joe. Meanwhile, Mann runs her own clothing and accessory store from which one of her employees – either Megan Fox or House 's Charlyne Li – has stolen thousands of dollars... but not so much money that the store seems in any danger of closing. In fact, while Rudd stresses with keeping his business afloat and contemplates selling their giant fortress of a house, he still drives around in a shiny new BMW (Mann has her own ride too, natch). Affluent, middle-aged white people problems, indeed.

What Apatow always does well though is write genuine relationships with a candid honesty. The sight of Paul Rudd on the loo playing Scrabble on his iPad is shown for laughs, but there's a recognisable element in his desire to steal himself away from his family for few moments. In a similar way, Debbie revels in the attention given to her by a young hunk following the neglect she feels from her husband. It often leads to awkward moments played for humour, but anyone in a long-term relationship will find plenty of unspoken universal truths about both genders that are rarely explored in comedies. Unless my wife is reading this, in which case, it's all made-up bullshit, and umm... hang on, I just need to go to the loo. 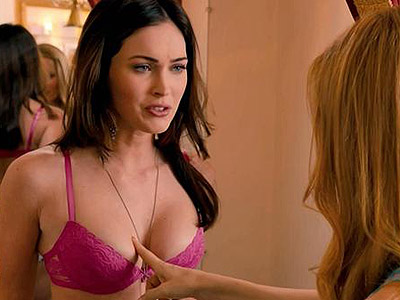 Oh, look what I just found.


But, of course, the main selling point for the film is seeing Rudd and co pull off the kind of spontaneous one-liners that have become their calling card, and there are as many quotable moments here as in any of Apatow's best work. It's no surprise that Rudd delivers the best of them, but Mann steps out of her typical role as 'put-upon wife' to match him in the comedy stakes.

And the film keeps things fresh by switching these up with great performances from Apatow's real-life kids and a constantly refreshed stream of smaller roles via the likes of Chris O'Dowd, Lena Dunham, John Lithgow and Jason Segel. Yet, the film still finds time to include heartfelt moments that remind us of what is at stake, such as a particularly poignant scene in which Pete and Debbie, during a period of not speaking to each other, share an unspoken victory at their daughter's school before walking silently to their own separate cars and driving away. 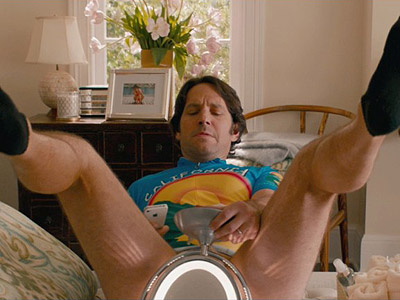 
The film is obviously shot in the usual Apatow way: keep the camera rolling for take after take of improvised readings and then splice together the best bits in the editing suite. Unfortunately this means that you tend to see the joins; several scenes of dialogue look cut together from different run-throughs, with bits chopped out or chopped in so as to include all the funniest lines. Not to mention that some extended sequences - such as Paul and Debbie going to the doctors for intrusive physical check-ups – seem thrown in just to give them a chance to reel off more hilarious reactions. And yet it's hard to care when the film is so frequently funny as a result. Besides, this is the Apatow way, and he knows it – unashamedly including scenes in which Rudd and Mann crack up at what the other is saying. This just makes the performances seem all the more natural.

So take the film at face value – a sincere examination of growing old, filled to the brim with off-the-cuff gags – and enjoy it in all its glory while you still can. It might not be too long before the only way you get to fully appreciate a film at the cinema is by going to those special screenings with extra loud audio and free tea.

More:  This Is 40  Judd Apatow  Paul Rudd  Leslie Mann
Follow us on Twitter @The_Shiznit for more fun features, film reviews and occasional commentary on what the best type of crisps are.
We are using Patreon to cover our hosting fees. So please consider chucking a few digital pennies our way by clicking on this link. Thanks!