This Is The End

Here's my micro-version of The Superman Project: I had no idea This Is The End existed until I got an email about the screening, and went in cold. Where my experience differs is that Ali did it deliberately; it only happened to me because my finger is laughably far from the pulse. I'd recommend it as a way to view comedy films if this one's anything to go by, but I don't want to hang its entire success on my own lame grasp of the Zeitgeist. This Is The End quickly makes you forget its self-indulgent premise and wins you over by virtue of simply being very, very funny.


The fact that everyone's playing themselves – made immediately clear by someone saying "Hey, Seth Rogen!" as he walks through the airport – is the main surprise for anyone as out of the loop as I. Or it would be if I hadn't just spoiled it for you. Everyone's more than game for poking fun at their star images, of course: James Franco and Jonah Hill in particular have fun sending themselves up as self-obsessed (Franco has a basement filled with memorabilia from his own films), earnest and pretentious. 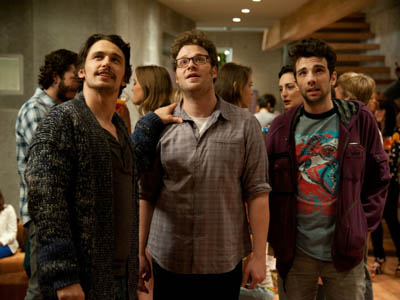 "This is the ape I killed on the Rise Of The Planet Of The Apes set. I stuffed it myself."


But it shouldn't work: a bunch of monied Hollywood stars playing themselves as partygoers during the apocalypse is the sort of idea that probably sounds brilliant when a stoned Seth Rogen's slurring it at you at four in the morning, then gets ditched when you both reconvene for breakfast. The crux of it, though, is that your familiarity with them – or their public personae – means you don't demand any initial time be spent on characterisation, which gives Seth and co licence to start cracking wise at a relentless pace.

It never lets up, either. It's a comedy with no interest in touchy-feelyness or having its characters grow, particularly. Even when they're all faced with the end of the world, none of them stops taking the piss out of each other, or expresses their friendship in an unguarded moment. One potentially emotional scene is immediately undercut by the strains of a cheesy Whitney Houston song. You get the impression there's a desire to get back to their foul-mouthed dude-joke roots, too, after a few dipped toes into the PG-13 pool came up cold. The setup's ideal for this: other than a few big CGI shots, the vast majority of the proceedings take place in Franco's house, where they can just riff off each other. A bunch of guys stuck in a place, annoying each other: it's classic sitcom stuff, ultimately. 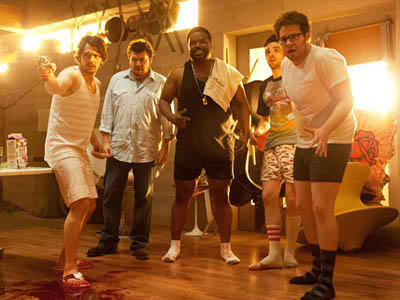 The One With The Gun And The Underwear.


It's interesting too, in terms of the erosion of barriers between star and audience that social media has helped along, that the film exists in the same world as its viewer, almost as if this is the point towards which Twitter's influence on Hollywood has been leading us. It's a style of self-conscious parody that's de rigeur these days: since Ricky Gervais' Extras demonstrated the value of showing you don't take yourself too seriously, it's a good career move. A Funny Or Die video here, a staged bit on Jimmy Kimmel Live there (who knew Harrison Ford had a sense of humour?), and your publicist can tick off 'likeability' and concentrate on whitewashing it the next time you wake up next to a dead hooker.

Having no idea what I was in for, I wondered beforehand if the title had more than its obvious significance. Maybe it does. This is the end, effectively. It's the Superbad to end all Superbads, in which the whole Rogen/Goldberg/Apatow scene finally goes meta and eats itself. If they were all retiring, it's the sort of film they'd bow out on. Not that I'd find out till about six months later.

More:  This Is The End  Seth Rogen  Jay Baruchel  James Franco  Jonah Hill  Danny McBride  Craig Robinson
Follow us on Twitter @The_Shiznit for more fun features, film reviews and occasional commentary on what the best type of crisps are.
We are using Patreon to cover our hosting fees. So please consider chucking a few digital pennies our way by clicking on this link. Thanks!