Tomorrowland: A World Beyond

The sole conceit of selling a movie like Tomorrowland is convincing you it's a place you need to visit – a world unlike our own where magical things happen and anything is possible. You cannot accuse of Brad Bird and screenwriter Damon Lindelof of underselling this vision of the future: the first hour of Tomorrowland is all tease and build-up and you're just as desperate to get to the promised land as the characters are. Unfortunately, Tomorrowland is a movie that cannot possibly hope to deliver on that promise; it's a movie chock-full of crackpot invention but is overcrowded with ideas that are ultimately underdeveloped. Tomorrowland is sold expertly as the land of milk and honey – it's such a shame it turns a little sour when you finally get there.


The first hour of Tomorrowland is faultless. Casey (Britt Robertson) is a wide-eyed ideologist who asks questions of inevitabilities – she's also the kind of character who only exists in movies: a goody-goody in class but also an edgy radical who gets in trouble with the law. When a mysterious pin turns up in her possessions when she's let out of jail, a simple touch transports her to another world – and that first trip is enough to have her craving a permanent passport to Tomorrowland. Led to the doorstep of ex-pat Frank Walker (George Clooney), Casey eventually fulfills her wish of returning to graceland but it soon becomes clear Tomorrowland needs her more than she needs it. 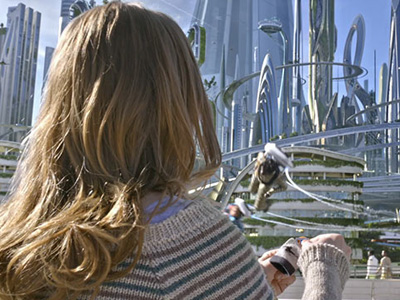 
Though the 'young adventurer embarks on a dangerous mission' set-up feels like quintessential Amblin-style Spielbergtainment, Tomorrowland is a Disney movie through and through. Bird and Lindelof do wonders toying with the Mouse House's own mythology, playing up the secrets of the theme parks and even trading on its newest acquisitions in a fun scene in a sci-fi store. Most obviously, however, Tomorrowland successfully channels the ideological ethos of Uncle Walt the eternal dreamer, and it's his vision of the future that Bird brings to life, right down to the retro '50s future aesthetic – yesterday's tomorrow today. Everything seems to chime, from Michael Giacchino's swirling score to the post-war message of positivity and community. The films couldn't be more different, but Tomorrowland shares the same righteous DNA as Interstellar: head in the clouds but heart in the right place.

The problem is that you don't ever really get to see Tomorrowland. Not as you'd hoped. Being missold on the concept of Tomorrowland is actually baked into the story. When Casey and Frank finally arrive – along with dainty girl fembot Athena (Raffey Cassidy), the Tinker Bell guiding them to Never Land – the lustre is lost. It's a pot of copper at the end of the rainbow; a bit like getting to Valhalla and realising it's too loud, or ascending to Heaven only to discover it's full of smug people. Crucially, Tomorrowland never feels like a world beyond – it's a half-empty city at best. In actual fact, the majority of the movie's chaotic invention happens back in the real world – booby traps and rocket ships and teleporters and robots. In contrast, Tomorrowland is an abandoned theme park.

Clooney's grizzled, ex-communicated Tomorrowlander is really more of a chaperone than he is the lead. His character is an inventor who, outside of a childhood flashback in the first 10 minutes, doesn't actually invent anything – his character arc is thinly-sketched at best. What he does provide is expositional support for Britt Robertson, who is a worthy focus puller; an audience surrogate who is the right mixture of wide-eyed dreamer and terrified screamer. Robertson has great comic timing, but you wish Clooney had been allowed to cut loose a little more, maybe crank up the eccentricities to Coen levels of kook, but it's not to be – this is potentially the first part of his final chapter: the role of Granddad George. 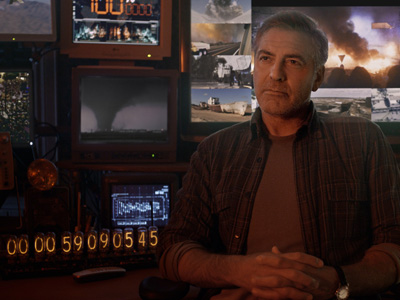 Get off my cyber-lawn etc etc


I'm always hesitant to board the Damon Lindelof hate-train, not only because I don't think he's necessarily a deserving target, but because I think he's only guilty of aiming high and falling short. That said, the same patterns that have dogged his career once again appear in Tomorrowland's very fabric – it's another Lindelof movie that makes big promises it can't back up; a killer pitch that hooks you in but ultimately lets you down.

There's a line here written by Lindelof and uttered irritably by Clooney that sums up his situation perfectly: "Do I really have to explain everything?" grumbles Frank. "Can't you just be amazed and move on?" The line's intention is solid: awe should not have to be justified. But the aggression of the delivery gives it an unintentional meaning; it feels like Lindelof is suggesting that spectacle should be enough to overpower story. That simply isn't the case here. Tomorrowland's whizz-bang first act is indeed amazing, but that alone isn't enough. It's a movie that's wonderful in so many ways – aesthetically beautiful, unpredictable, ideologically commendable and mercifully lacking in a tedious last act special effects extravaganza – but for every moment Tomorrowland sparks your imagination, it also reminds you that you can't tell a truly satisfying story with good ideas alone.

More:  Tomorrowland  Brad Bird  George Clooney  Britt Robertson
Follow us on Twitter @The_Shiznit for more fun features, film reviews and occasional commentary on what the best type of crisps are.
We are using Patreon to cover our hosting fees. So please consider chucking a few digital pennies our way by clicking on this link. Thanks!