From what I gather due to the half-hearted outrage surrounding the existence of this remake, the original Total Recall is held in fairly high esteem. Never saw it, sorry. Go ahead, say it. I know you want to. "YOU HAVEN'T SEEN TOTAL RECALL?" Sorry, just never got around to it. "HOW CAN YOU HAVE NEVER SEEN TOTAL RECALL?" Like I just said. "I CAN'T BELIEVE YOU HAVEN'T SEEN TOTAL RECALL!" And so on. As it happens, not being on familiar terms with the original Arnoldgeddon puts me in the unique position of being able to judge Len Wiseman's reboot without bias; nowhere in this review will I bemoan the lack of/inclusion of beloved one-liners, the fact Colin Farrell isn't fit to buff Schwarzenegger's pecs or that it isn't set on Mars. My slate is clean, so I'm free to see Total Recall 2012 for exactly what it is: a bright and shiny slice of blockbuster sci-fi that's so dazzling it makes tender love to your retinas but so underwhelming it practically wipes itself from your memory the instant it's over.


Here's the deal, plot wise. It's the future, obviously. War has ravaged the Earth, also obviously. The only two habitable environments are on opposite sides of the world: the United Federation of Britain (go Team GB!) and The Colony (looks like Asia, but peculiarly, is Australia) are connected by a giant elevator shaft called 'The Fall'. Farrell plays Douglas Quaid, an average guy (WITH AN AMAZING BODY) with an average apartment (ACTUALLY AMAZING), an average job (BUILDING FUCKING AWESOME POLICE ROBOTS) and a loyal, undemanding wife Lori (KATE BECKINSALE). Bored of his totally shit life, Quaid visits brain-tinkerers Rekall to have false memories of a secret life as a spy implanted in his brain; except, here's the thing, it turns out he actually IS a top secret spy, and not Douglas Quaid at all. Cue the bad Arnie impression: if he's not him, den who da hell is he? Also, get to da chopper! I'll be back! Hyaagghh! 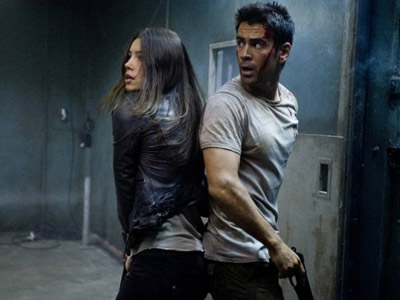 You call that a tricep?


Driven by a head-scratching, chin-stroking Phillip K Dick concept, Total Recall 2.0 retains a strong narrative, although it's clear Len Wiseman isn't all that fussed about maxing out your brain box – he'd rather whisk you through his world than let you stay a while and soak it in. That's a shame, because the production design is absolutely stellar: the massive sets drip with detail on both sides of the planet, merging seamlessly with jaw-dropping future vistas not immediately visually familiar in the sci-fi pantheon (no easy task). It's a veritable buffet of eye candy for cinematically obese aesthetes such as myself.

Alas, there is more ingenuity in the look and feel of Total Recall than there is in the screenplay; a clichéd collection of action sequences strung together via boneheaded plotting and by-the-numbers dialogue. At one point, Colin Farrell implausibly delivers near-perfect exposition to himself via a futuristic holo-phone. That's the sign of a movie that's in too much of a rush to get to the next big explosion and/or hover-car chase scene. It has lots of both.

Total Recall is the kind of movie that causes snotty critics to refer to its target audience as 'the videogame generation', but in this case, I can actually see why. It's not so much that Total Recall is essentially videogame-esque in structure (escape scene, cut-scene, puzzle scene, platform section, car chase etc), more that the human characters in the film have little to do other than fire guns and dodge large obstacles to survive. There's so much jumping. One sequence sees Quaid and rebel love interest Melina (Jessica Biel, utterly redundant) leap from lift to lift to avoid death by crushing: this takes about 15 minutes and is repeated endlessly, without putting either character in one iota of danger. With every jump they take, you will their ankles to shatter upon landing. For a film that's capable of slathering drool on your chin with every establishing shot, when it comes to generating excitement it's about as imaginative as Doodle Jump. 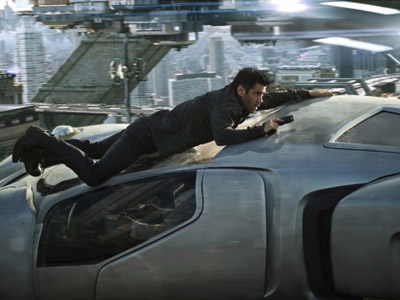 'Press X to jump to next car or hold R1 to enter'.


Such a basic script means Colin Farrell is rarely required to act, usually just to react. He has one nice scene where he learns his actual self can play piano beautifully, but otherwise, it's a masterclass of over-cooked confusion from the Joey School of Acting. Kate Beckinsale gets the juiciest role (no need to ask why) and is the closest to nailing the playful tone as the true villain of the piece, but she's needlessly bumped down the pecking order by Bryan Cranston's baddie in a wretched third act invasion sub-plot, which peppers the paper-thin plotting with too many holes to comprehend. Despite its big ideas, Total Recall all boils down to a fist fight, and despite pummelling a robotic police officer into spare parts just moments earlier, crazy-abbed Farrell lets 56-year-old politician Cranston get the drop on him in a scrap. I'll suspend my disbelief in accepting an anti-grav lift that can travel through the Earth's core in 17 minutes, but I can't accept this.

I can't tell you if Total Recall suffers in straying from the original in any way, but I can tell you that whether you've seen the 1990 version or not, it'll still seem familiar. The screenplay is a hotch-potch of various sci-fi staples (Minority Report's hover car freeway is just one fairly transparent pinch) and half-baked ideas (there's more than a hint of The Phantom Menace come the closing 20 minutes). Unfortunately, like a dull-as-dishwater blonde wearing a push-up bra and 'fuck me' boots, it's so good-looking that idiots like me will forgive it almost anything – I just can't guarantee you'll enjoy spending the evening with it.

More:  Total Recall  Len Wiseman  Colin Farrell  Kate Beckinsale  Jessica Biel
Follow us on Twitter @The_Shiznit for more fun features, film reviews and occasional commentary on what the best type of crisps are.
We are using Patreon to cover our hosting fees. So please consider chucking a few digital pennies our way by clicking on this link. Thanks!