From time to time a film comes along that marries the perfect story, perfect script, perfect director and perfect cast. Chinatown had it, The Godfather had it and True Grit's got it. Sit back and wallow in its sweet perfection.

This is the film the Coens were born to make: the Western, the archetypal American genre, was crying out for the Coen treatment. They don't mess around, taking on a John Wayne classic shows they mean business. Joel and Ethan take their lead from Charles Portis' novel rather than Henry Hathaway's 1969 film, but this is no Sunday afternoon cowboy yarn like the original film; it is a far superior movie in every way.

It'd certainly make for a nice pub quiz question a few years down the track if Bridges won an Oscar playing the same role that Wayne won an Oscar for. But as Bridges scooped it last year for Crazy Heart, it seems unlikely. If I had my way, Colin Firth would have won last year for A Single Man and Bridges would win this year for True Grit. 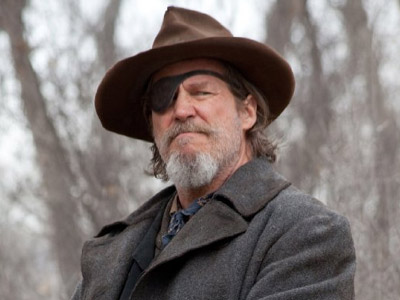 
Mattie Ross (Hailee Steinfeld) is a heroine with true grit. Thankfully the precocious little shit portrayed by Kim Darby in 1969 is gone - the current incarnation is a sassy, fast-talking firecracker. Mattie is out to avenge the death of her father, who was shot by the notorious outlaw Tom Chaney (Josh Brolin). Sassy or not, she's a 14 year-old kid and she's gonna need some help catching the culprit. Cue Rooster Cogburn (Jeff Bridges), a trigger-happy Marshall with a fondness of whisky. Bridges is magnificent - wild, debauched, pathetic and noble. A gentlemanly spirit encased in gristle, gruffness and gut.

The relationship between Mattie and Cogburn lacks the sentimentality of the 1969 film, but their begrudging admiration gradually becomes protective affection. Mattie's relationship with LaBoeuf is more complicated, with just a hint of sexual tension giving it an uneasy edge (the paddling scene in particular makes for queasy viewing). The scenes on the open road allow time for Coensy flourishes; a surreal encounter with a bear on a horse and a hanged man the most obvious. As ever, the Coens' script is thick, fast and funny. The characters' southern drawl suits the deadpan offbeat humour, much of which is derived from Rooster's drunkenness and his constant bickering with pompous ass LaBoeuf. 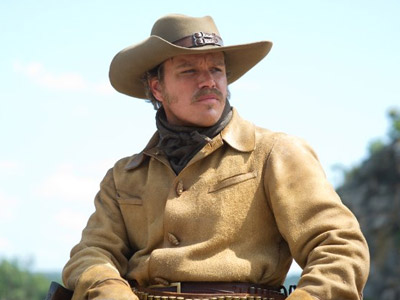 
The wide open vistas, sense of isolation and cat and mouse dynamic gives True Grit much in common with No Country For Old Men and Fargo from the Coen back catalogue. The scene in which Mattie runs verbal rings around a local businessman in a horse-trading deal bizarrely calls to mind the scene with Chigurh and the shopkeeper in No Country. The saddle banter and the peculiar encounters on the road are also reminiscent of O Brother, Where Art Thou?

All the performances are faultless and Hailee Steinfeld really is impressive, but Bridges steals the show. If I had to find something negative to say about it (and I'm really scraping the barrel here), it would be that the film is so stately and assured that perhaps it lacks the exuberance of the Coens' earlier work.

The tough justice of the West is plain to see, so too is the speed of change, with Rooster seeing out his days as a show pony. True Grit has a menacing edge and a touch of crazy about it, without ever approaching the fatalism of No Country. It's a film in which the good guys are smarter and braver than their adversaries; a film in which no matter what is thrown in your path, a good heart and true grit will get you through.

More:  Coen Brothers  Jeff Bridges  Matt Damon  Josh Brolin
Follow us on Twitter @The_Shiznit for more fun features, film reviews and occasional commentary on what the best type of crisps are.
We are using Patreon to cover our hosting fees. So please consider chucking a few digital pennies our way by clicking on this link. Thanks!