Arguably my generation doesn't know it's born, but it's not that I'm unmoved by tales of World War Two heroism. If anything they serve as a reminder that millions sacrificed their lives for my freedom and now I'm making dick jokes on the internet. I do think these stories deserve to be treated without recourse to emotional manipulation, though. Unbroken might have been a quiet examination of determination and the human spirit, but overshoots in trying to emphasise how inspirational it is.


I wonder if Hollywood has an effect on how we relate to war such that we can't think of it except in terms of stirring orchestral swells and men with dirty faces shouting desperately under heavy shelling. Maybe this trivialises our ideas of heroism or cements them. But it does leave me thinking, whenever I see a war movie that goes for the emotional jugular, that it should've just kept it simple.

Unbroken's story is simple enough and its emotional resonance just as much. Louis Zamperini (Jack O'Connell), a 1936 Olympic runner, was on a US Army Air Forces plane that crashed into the Pacific ocean in 1943. Having survived in a dinghy for 47 days at sea, he spent the rest of the war undergoing brutal treatment in a Japanese POW camp. It's a tale of remarkable spirit and resolve, and for the most part these qualities shine through, but it isn't always given room to tell itself. 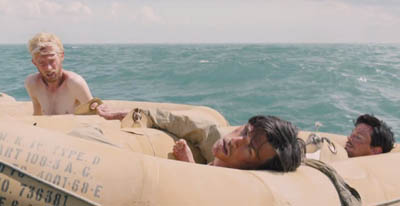 "Just checking, guys: when we said we had no water, we meant just still, right? Because I've got six bottles of sparkling."


And yet what you see is overwhelmingly watchable. Jack O'Connell continues to deliver remarkably varied performances whenever you see him: the accent is only bread and butter; he carries the character with total conviction, and no overexertion to make Zamperini more heroic.

And Angelina Jolie makes some brave choices as a director. There are essentially no women in the film, for example. Zamperini met the woman he'd marry after the war, but a little artistic licence to anchor it in a love story - a sweetheart at home who inspired him to survive, a faded black-and-white photo he kept with him through it all, etc etc - would've been a choice a lot of directors would've made. We spend a long time in the dinghy with Zamperini and his crewmates, too: Jolie doesn't shy away from putting us right in there with them, with no cutaways back to the families worrying back home. (Think Cast Away.) It's these aspects that are judged just right, with a simple emphasis on the frailty of life but the strength of spirit. 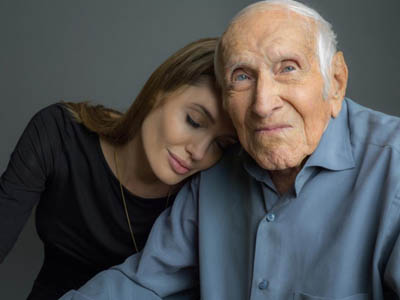 "I'm definitely in here, boys. Can you drive my car home?"


Elsewhere, though, there is clumsy, portentous advice from his brother to the teenaged Zamperini that never giving up is a really important thing, and we don't see a lot else of the brother so the idea that he was much of an influence is largely lost anyway. There are attempts made, too, to equate the resolve necessary for sporting achievement with that for war, which rarely succeeds (other than in Escape To Victory, obviously) and makes for a trite visual analogy.

But this is difficult ground. While there's little risk of underplaying the man's achievements, there are audience considerations to make. There is enough distance from the world wars now that younger cinemagoers' perception of them, and their human cost, is softened and sanitised. Certainly mine is; I'm sure a 16-year-old Call Of Duty player's is far more so. Will it be enough to lay out Zamperini's story in straight terms and let it speak for itself? Maybe there's an extra bit of emotional dusting required before they will get it. Maybe Hollywood has a monopoly on how we experience emotion, or at least react to the idea of heroism, and maybe we can't process it properly without recourse to the traditional semiotics: stirring music while a man lifts a heavy thing and roars in triumph. What I'm saying is: it's very good, but there's a Coldplay song over the closing credits.

More:  Unbroken  Angelina Jolie  Jack OConnell  Domhnall Gleeson  Finn Wittrock  Jai Courtney  Garrett Hedlund  Takamasa Ishihara
Follow us on Twitter @The_Shiznit for more fun features, film reviews and occasional commentary on what the best type of crisps are.
We are using Patreon to cover our hosting fees. So please consider chucking a few digital pennies our way by clicking on this link. Thanks!