There are plenty of films that scare you. There are few that leave lasting damage. Under The Skin does not bear its title lightly: it is a film that's so profoundly distressing, it disturbs on a genetic level. On the surface, it is about a female alien interloper looking to harvest the bodies of single men for reasons too ungodly to explain. But burrow deeper and you'll see that Under The Skin is a catalogue of your worst fears: fear of intimacy, fear of nature, fear of being chased, fear of being violated, fear of being outcast. Jonathan Glazer's third film explores the concept of death more intimately than I would have cared for; it's a nightmarish vision that I imagine will haunt me to my grave. Frankly it makes 'Windowlicker' look about as menacing as a Katy Perry video.


Jonathan Glazer has stripped the meat off the bones of Michael Faber's 2000 novel and in doing so has left a horror film for whom a vacuum of familiarity is its most terrifying aspect. Scarlett Johansson's predator inhabits a recognisable form – face by Hollywood, clothes by Primark – but she visibly lacks even the faintest strain of humanity. During one of Johansson's many chillingly vacant stares, I was reminded of a quote from American Psycho: "There is no real me: only an entity, something illusory. And though I can hide my cold gaze, and you can shake my hand and feel flesh gripping yours... I simply am not there." She is an empty vessel, expertly rendered.

Glazer opens the movie with a series of geometric shapes, circles within circles, set to Mica Levi's nerve-shredding score; meanwhile, Johansson practises vowel sounds with mechanical precision, like she's assembling a weapon. It is unsettling in a way that will catch you off guard. Later, we learn the fate of the men Johansson lures to their doom. It is terrifying in a way that is beyond convention. Under The Skin is the most alien a film about aliens has ever felt: it's abstract yet queasily resonant, comprised of visions that lurk in the darkest recesses of our subconscious. To explore the headspace capable of conjuring this imagery would be to embrace a little bit of insanity. This is undiluted nightmare fuel. 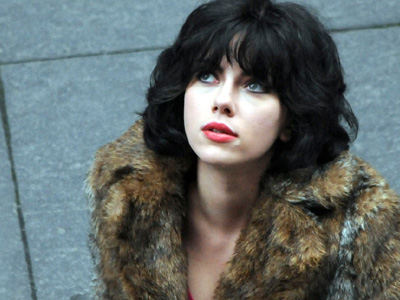 GET OUT OF MY HEAD, SHE-DEMON.


Johansson, for her part, is mesmerising: you can't take your eyes off her. Playing an extra-terrestrial is easy, but Scarlett gives a masterclass in vacancy: the sterile, shark-like stare, the ability to turn off her emotions like a switch, the hint of a lazy eye. You'll find yourself gripped as Johansson beckons you into an inky darkness - look closely, and you might see your own reflection staring back, your face frozen with wonder, just like hers. If ScarJo ever finds herself single and on the prowl for men, Under The Skin will significantly harm her chances of pulling.

Glazer's camera adores Johansson, pulling in for close-ups that are so extreme they are almost pornographic in their intimacy. There is nudity - this is a Scarlett No-Pants-On situation to a level which officially qualifies as 'brave' - but Johansson's nakedness is neither exploitative nor erotic (if you get turned on by this movie you are officially a fucking weirdo or an alien). Glazer has teased out a remarkable performance from his leading lady; one that is confident and assured but also unexpectedly vulnerable. Silent moments of reflection - sometimes literally, as Johansson frequently loses herself in mirrors, poring over her earthly form - provide a narrative while saying nothing.

Scotland makes for an oddly perfect setting: from remote highlands to bustling town centres, these are locations both exquisite and grim that lend themselves well to scenes of desolation and despair. Under The Skin is a film that aches with tragedy: there isn't a single frame that isn't laced with sadness and pure, naked fear. There is a scene on a grim Glasgow pebble beach that ends with a simple shot of a baby that was so upsetting, I could feel it being permanently etched onto my psyche. Truly this is a film that gets under the skin like no other; Levi's dissonant score creates a pervasive sense of dread, teetering on the brink of madness. 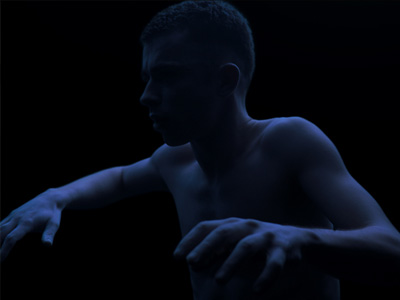 
For all of Under The Skin's bleakness, however, there are moments of sublime beauty. Glazer is in awe of nature; cinematographer Daniel Landin soaks in the majesty of Scotland, from the rolling waves to the misty moors. A scene in which we are allowed a glimpse inside the frenzied brain of Johansson's alien is intensely frightening yet oddly soothing. The movie's final, fragile shot is nothing short of breathtaking, marrying light with dark, allowing ample time for awed reflection and decompression. Under The Skin finds grace even in moments of raw horror, composed by a filmmaker who can legitimately call himself a master of the art.

It's an arthouse Species. It's Bangbus with existential terror. Without a doubt, it'll be the most disturbing film to ever be screen-grabbed for Nuts Magazine's 'Naked Movie Stars' issue. Any way you choose to categorise Under The Skin feels insubstantial. Just know that it is a fiercely, aggressively original horror film in the truest sense of the word. The strangest but most fitting recommendation I can give it is this: often, in the early hours when my mind would inevitably wander to thoughts of mortality, I would imagine death as a bottomless black abyss; an absence of everything in which I was completely and totally alone forever. Now, thanks to Under The Skin, there is something down there with me.

More:  Under The Skin  Jonathan Glazer  Scarlett Johansson  Things That Terrify Me To My Very Soul
Follow us on Twitter @The_Shiznit for more fun features, film reviews and occasional commentary on what the best type of crisps are.
We are using Patreon to cover our hosting fees. So please consider chucking a few digital pennies our way by clicking on this link. Thanks!