Before watching Unfriended – a real-time horror film that, according to IMDb, "redefines 'found footage' for a new generation of teens", I was confident that I was 'down with the kids'. But now, having sat through a film completely confined within a teenage girl's laptop as she Skypes her six friends, I don't know what to think any more. They probably don't even say 'down with the kids' these days, do they? As I sit here, concerned about the ever-growing number of grey hairs on my head, I'm seriously starting to worry about how out-of-touch I clearly am with the youth of today. Hell, I didn't even know you could Skype six people at once.


While the film's events unfold through Blaire's (Shelley Hennig) laptop, offering up a whole new style of frights, I found myself instead more distracted by the number of tabs she had open on Google Chrome. And the collection of photos dumped in the corner of her desktop annoyed me more than it should have. But as Blaire multi-tasks effortlessly, jumping from Skype, to Facebook, to YouTube, to Spotify, to iMessage to Chatroulette (with obligatory cock shot) and types, retypes and minimises windows, Unfriended feels less like a redefined horror and more like watching the bloke from I.T remotely access your computer for 83 minutes.

Apart from an unorganised desktop, Blaire and her friends have much bigger things to worry about, and we're not talking crap WiFi connections. Doing as most teens do (I imagine) they spend an evening Skyping. They organise prom plans, bitch about classmates, poke fun at one another, laugh about virginity, the usual stuff American teenagers in films talk about. But things take an eerie turn for the supernatural when someone they don't recognise jumps into their chat. They soon come to realise they're being tormented by what seems to be the vengeful spirit of their dead friend Laura, who killed herself exactly one year earlier after she was cyberbullied when an embarrassing video of her was uploaded to YouTube. 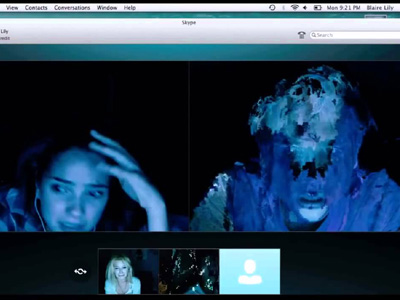 The Blue Screen Of Death claims another victim.


While the film's narrative style takes a while to get used to, it's a bold and interesting move from the filmmakers, not to mention a strong gimmick. The story itself isn't up to much – we've all seen people tormented by evil spirits before, and done to a higher standard too. But director Leven Gabriaze and writer Nelson Greaves have given it an ultra modern twist that'll resonate well with modern teenagers. A horror told entirely through Skype is really the next logical step for a genre that's always evolving.

The film's biggest issue however lays with the six main characters. While there is enough suspense, peril and tense moments to keep your attention, you really couldn't give two shits about the fate of the clichéd American high school teens with zero morals. They're so self-obsessed that when they're forced to play a game of 'I Have Never' it's revealed just how detestable and mean-spirited they really are. It's no surprise they're being trolled by a ghost really. They deserve it. 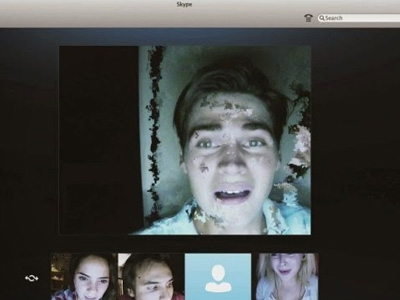 
Thankfully, what makes Unfriended stand out is the technical authenticity and the little details the filmmakers have thought of; like the relevant tabs Blaire has open, her internet history and old Facebook conversations with classmates about homework. It genuinely looks like the messy, personal computer of a sixteen-year-old girl (not that I know what one of those looks like). And while Blaire and her friends are all idiots, they're all extremely believable idiots. This level of legitimacy and well-thought-out online habits of a typical teen helps give the film a heightened sense of realism, making it all the more chilling.

Ultimately though, Unfriended isn't as fresh or original as the filmmakers were hoping for – 2013's The Den used a similar format, as did Elijah Wood's Open Windows just last year. It's nowhere near as effective or truly frightening as The Blair Witch Project or Paranormal Activity, but it is a fittingly clever cyber-horror for the technological times we live in. And this is something us old timers might just have to get used whether we like it or not.

More:  Unfriended  Horror  Levan Gabriaze  Heather Sossaman  Renee Olstead  Matthew Borher  Moses Storm  Shelley Hennig  Courtney Halverson  Jacob Wysocki
Follow us on Twitter @The_Shiznit for more fun features, film reviews and occasional commentary on what the best type of crisps are.
We are using Patreon to cover our hosting fees. So please consider chucking a few digital pennies our way by clicking on this link. Thanks!