Valerian And The City Of A Thousand Planets

Anyone who has read this site's review of Jupiter Ascending or pretty much any of the Transformer films will know that we tend to be more lenient than most when it comes to over-ambitious sci-fi epics. We forgive atrocious dialogue and overlong running times in order to reward dumb fun alien shit. So, frankly, Valerian And The City Of A Thousand Planets is lucky to have us, because this is a movie in which legendary filmmaker Luc Besson doesn't bother looking at the script twice nor his watch once while he continuously plays with an endless line-up of CGI distractions. This is him procrastinating with his own imagination in the same way that you or I would dick about on Twitter rather than get on with any real work. This is Luc Besson's Faff Element.


Accepting this is key to how much you might enjoy the film. The plot is straightforward as far as bonkers space adventures go: Major Valerian (DeHaan) and his trusty partner Sergeant Laureline (Delevingne) are special agents tasked with protecting human territories on Alpha, an expansive metropolis of alien races and spaceships all floating together in the vast cosmos. The duo are called to engage with Clive Owen's military commander to investigate a new threat that involves protecting a creature that er... shits diamonds and pearls.

If the film focused simply on the mission at hand, it might be more compelling and the revelations that unfold might even have some impact, but instead it frequently gets sidetracked with contrivances and bizarre sequences that bear no consequence to the main plot. Scenes in which a tyrant alien king chooses his dinner from a procession of space delicacies, or when a peaceful species of ethereal E.Ts prance about on a beach with giant seashells strapped to their backs certainly add colour to proceedings but those that want more drive than warp from their intergalactic adventures will be left frustrated at all the wasted time. This film just basically forces its audience to be space tourists on a mandatory guided tour. 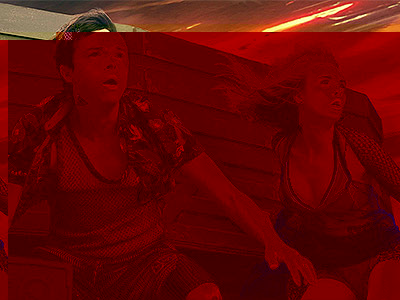 "Excuse me, sir. Are there any Starbucks over here? STAR-BUCKS. Nevermind."


It was always to be expected, of course. This is, after all, Luc Besson's world and we're all just forgiving in it. But some of the superfluous stream-of-conscious storytelling just feels extraordinarily extraneous. Take for example a section of the story that sees Valerian crash in an unknown quadrant of the massive space structure, Alpha. In order to rescue him, Laureline escapes from her military escorts and finds a trio of aliens whose trademark characteristic is the exchange of information for money. They lead her to a crackpot submarine captain who then takes her to steal a giant jellyfish from a deep-sea fish monster, which then attacks them. Escaping back to dry land, Laureline then places the jellyfish over her head to watch the... memories... of what happened to someone else... and sees where Valerian crashed before the jellyfish starts... eating... her own memories?

All of this takes place over 20 minutes and could have been easily replaced in the script with the simple line "Laureline tracks him on her radar".

That's the point, of course: the film is so clearly an excuse for Besson to go spacehog-wild over fun creature designs and cool gadgets. And while none of these, truth be told, are particularly groundbreaking, this is still where the film shines. A extended sequence of Rihanna pole dancing while shape-shifting through various male fantasies is a stand-out moment, and one gurning, eager-to-please alien trying to choose a new outfit for Laureline is endearing and genuinely laugh-out-loud funny. 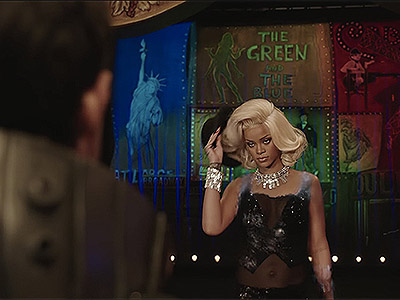 "Very nice. Now can you turn into the Maid Marian fox from Disney's Robin Hood? No reason."


On the whole though, the film is let down in other much more important areas. Chiefly, the chemistry between the two leads gives off few sparks, but not for the reason that you would expect. Delevingne delivers all the screen charisma here while DeHaan is miscast as the dashing, roguish hero, clearly as uncomfortable with his action sequences as he is with his character's chauvinist 'ladies man' persona. Yes, he is Luc Besson's stiff element.

Meanwhile, the film never manages to be particularly gripping. It doesn't help that, as we follow Valerian and Laureline, who obviously already know all the tricks and schticks Alpha has to offer, it feels like we are always one step behind, trying to keep up with the constant stream of new information being thrown our way.

And when it comes to the final act reveal, a dark secret that has been at the heart of the mission all along, it doesn't have the impact that Besson thinks it does. Partly because it has mostly been pieced along the way, and partly because any shock factor at the suggestion of violence has been lost over the previous two hours of shooting guns and mauling beasts.

So why three stars? Because there's still much here that's entertaining. The central conceit - a massive structure harbouring thousands of species all trying to co-exist together in deep space is worth exploring and to not let Besson take several detours along the way would be to miss the entire point. Yes, as ever with our reviewing this kind of film, allowances are made for one reason: dumb fun alien shit.

More:  Valerian And The City Of A Thousand Planets  Valerian  Luc Besson  Dane DeHaan  Cara Delevingne  Clive Owen  Rihanna
Follow us on Twitter @The_Shiznit for more fun features, film reviews and occasional commentary on what the best type of crisps are.
We are using Patreon to cover our hosting fees. So please consider chucking a few digital pennies our way by clicking on this link. Thanks!