Everyone stop filming yourselves doing everything. It inevitably ends in your murder. Then someone will find the footage and make money off it while you're in the cold, cold ground. Even worse, the footage won't even comprise a found footage movie: it'll end up being the footage someone finds in a found footage movie about people finding footage. And all people will ever say of you will be: "Sheesh, that guy sure went to great lengths to explain why he was filming himself."


No, I don't have anything against found footage in particular. In fact, I really like the idea it's putting forward: that you inhabit the same world as the characters. But it always seems compromised by a lot of distracting exposition around the fact that the person is filming, which reminds you that you don't. Then later on, when the limbs and the organs start flying all over the place, they inexplicably keep filming, rather than drop the camera and head for the hills. V/H/S performs this fragile balancing act fairly well for the most part, but ultimately doesn't quite sustain it. 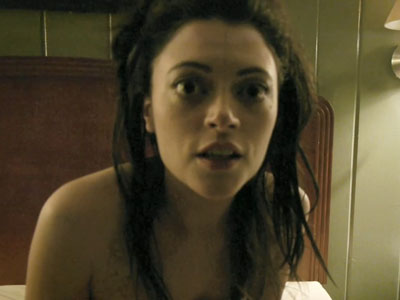 A bunch of guys under instruction to burgle a house and steal a VHS tape make the sound and reasoned decision to film themselves doing it, as any criminal worth their salt would. On arrival they find a dead man in an armchair in front of several TV sets, and a raft of VHS tapes. They watch five, each of which shows us footage that begins innocently enough, then ends in a bloodbath. These five short films, each by different directors, vary greatly in quality.

The first is terrifying. Cleverly, it's established that we're seeing video from a tiny hidden camera mounted on a pair of glasses, which means we can forget about the motivation for filming, and get lost in the night's work of a group of drunk guys who take a strange girl (Hannah Fierman) back to their hotel room. Her performance is horribly unsettling: wide-eyed and full of weird, cat-like motions, backed up by some excellent make-up work. Exacerbated by the seasick camerawork, it made me seriously consider leaving the room. And I'm pretty tough.

Next, a couple on a road trip have a strange encounter with a prowling girl that ends in a way that's ambiguous, which is very well judged: the reason for the conclusion is left to your imagination, just as it would be to the guys in the house watching it. (They're still there. As well as being sure to film yourself when you're on a burglary, make a point of sticking around for as long as possible too.) 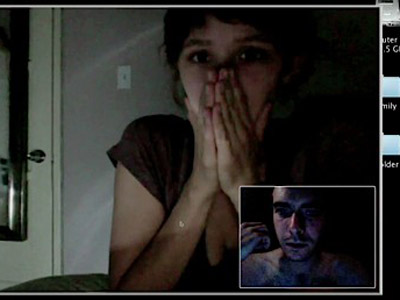 The scariest thing you've seen on Skype since Leslie Grantham.

There are two less successful shorts to follow, one a forgettable and badly-acted 'teens go to the lake for the weekend' setup, propped up only by some discomfiting use of camera static. The other is a contrived Skype exchange between a girl and her boyfriend. She keeps hearing weird noises in her house, so naturally carries her laptop around with her when she goes to investigate. At one stage she insists on closing her eyes so she doesn't get scared and letting the guy direct her around the house, at which point you're basically just watching Knightmare.

Last is a well-crafted haunted house piece with a brilliantly tense ending. You're left a little nonplussed as to the story of the burglars which knits the thing together – especially as it stops bothering with the idea that they're watching the videos after a while and just starts splicing them in – but you're just about satisfied that the good outweighed the bad. Maybe found footage has been pretty much done to death by now, but there's some added mileage in the extra layer V/H/S provides.

More:  VHS  Horror
Follow us on Twitter @The_Shiznit for more fun features, film reviews and occasional commentary on what the best type of crisps are.
We are using Patreon to cover our hosting fees. So please consider chucking a few digital pennies our way by clicking on this link. Thanks!