The novel that sparked a thousand debates in book groups up and down the land has finally made it to the big screen, and the film manages to be just as devastating as its source material. Eva (Tilda Swinton) is the mother of a mass murderer. Her teenage son Kevin (Ezra Miller) committed a horrific, Columbine-style atrocity at his high school, only Kevin didn't follow the fashion for turning his weapon on himself – Kevin is very much alive.


But this is really a film about Eva. We meet three different Evas – the first is a successful young woman, a travel writer, a free spirit, a romantic in the early days of a relationship with Kevin's father Franklin (John C. Reilly, the human embodiment of Yogi Bear). The second Eva is one succumbing to
domesticity, life in the suburbs, a career on hold and impending motherhood. We follow the second Eva through 15 years of this life, slowly being crushed and suffocated.

The third Eva is broken, defeated, haunted, living (barely) in the aftermath of Kevin's grand gesture. She visits Kevin in the juvenile prison where they sit wordlessly as Kevin methodically bites his fingernails off and lays them on the table before her, a perverse offering to the woman that gave him life. The film flits seamlessly between the Evas; it's a masterclass in film editing, building a complex psychological profile of this woman and her uneasy relationship with her firstborn child. 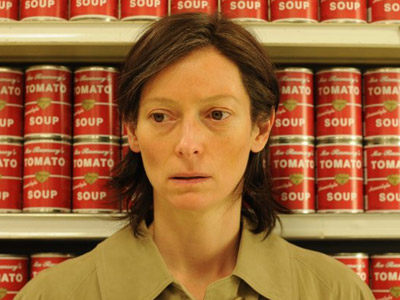 So it's come to this: the weekly shop in LIDL. Just kill yourself.


During pregnancy, Eva regards her unborn baby as a parasite rather than a mini-miracle and from the moment Kevin is born, it is clear he and Eva do not like each other. They are silently at war with one another, with affable Franklin trapped in the middle. Some of the ambiguity of the book is
perhaps lost here. The book is told from Eva's perspective in a series of letters to Franklin, making it hard to know whether Kevin truly is a regular little Damien, or whether Eva's view of the situation is skewed. In the film it is fairly unequivocal that Kevin is a little shit, but the central questions remain – is this nature or nurture? And to what extent is Eva to blame?

To muddy the oedipal waters further still, Eva and Franklin have a second child, Celia (Ashley Gerasimovich), a sweet-natured kid who Eva instantly bonds with. Does this suggest that there is an inherent evil in Kevin? Or could it be that second time round, Eva is ready for motherhood and the
sacrifices that go with it, embracing Celia who responds by growing into a normal, well-adjusted kid? There are two moments in the film when we glimpse a vulnerable side to Kevin, suggesting there may be some good lurking beneath all that venom. This makes it difficult to dismiss him as a monster - there are no easy answers for the viewer of this film. 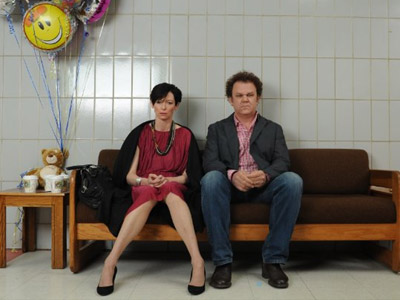 
Previously Lynne Ramsay has made small but acclaimed films, Ratcatcher and Morvern Callar, but this film marks her out a major-league director. In adapting We Need To Talk About Kevin, she's deftly avoided the obvious pitfall of turning this tale into a pulpy thriller, achieving something more
subtle and more enduring as a result. Her visual style is striking throughout, right from the opening aerial shot of a sea of squirming semi-naked revellers covered in tomatoes. Tomatoes reappear later in the film as tins of soup uniformly stacked on the shelf of the supermarket as Eva shops, representing the shift her life made from reckless impulse to bland domesticity. The red motif recurs over and over again, turning Eva into a Lady Macbeth figure, forever stained by the blood on her hands.

Ezra Miller gives an impressive performance as Kevin, keeping an air of serene menace, passive aggressiveness being a weapon of choice in his war on Eva. It's impossible to imagine anyone but Swinton as Eva. She captures youthful exuberance, tragic hopelessness and just about everything in between. It's rare that a character is so fully realised and allowed the luxury of such complexity on screen. Give this woman an Oscar for Christ's sake.

More:  We Need To Talk About Kevin  Tilda Swinton  John C Reilly  Ezra Miller  Lynne Ramsay
Follow us on Twitter @The_Shiznit for more fun features, film reviews and occasional commentary on what the best type of crisps are.
We are using Patreon to cover our hosting fees. So please consider chucking a few digital pennies our way by clicking on this link. Thanks!