Welcome To The Punch

At the press screening that I attended for this film, writer-director Eran Creevy gave a short introduction in which he outlined his main objective: to create a stylish US action thriller, but set in London. The kind of film that we just don’t see made on our home turf – glossy and sleek instead of gloomy and bleak. But is that a valid goal? To swap out stark realism in favour of polished spectacle? The answer of course is: "Shut up already and give me all of your cinema tickets".


Creevy also cited the late, great Tony Scott as a key influence on this film and it's immediately obvious how his recognisable visual style has been informative here. With a high-grain, authentic look and feel, Welcome To The Punch aims for 'slick thriller' territory and hits it square on. And yet, with a pulsating heartbeat soundtrack and nourish cat-and-mouse story, the film also manages to be happily reminiscent of Michael Mann's best work.

Opening with a pounding motorbike chase through the late-night deserted streets of England's fair capital, we are immediately introduced to our cop and robber. Mark Strong is Jacob Sternwood, the expert brains behind a calculated heist, and James McAvoy is Max Lewinsky, the determined detective on his trail who will go outside of the rule book if he has to in order to get his man. Wait for back-up? Pffft. Don't make him laugh.

If all of this sounds a little too familiar, that's because it is. While each and every shot is refreshingly cinematic for a London-based movie, the set-up here is one that has been standard fare in Hollywood for decades: two men on opposite sides of the law forming a mutual respect for each other. But as the story unravels into an intriguing mystery, this film becomes more than just a typical catch-me-if-you-can actioner. 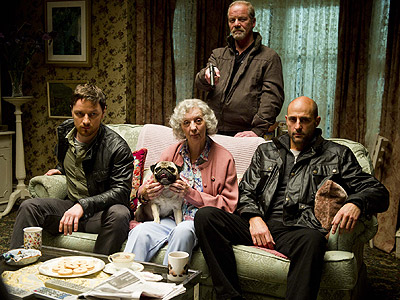 Little known fact: Every British movie ever made features a tray of jammy dodgers.


Creevy keeps key plot points close to his chest, while maintaining the sense that a dark conspiracy is at work that threatens to undermine Scotland Yard's inner workings entirely. And in focusing on Max's obsession with catching his One That Got Away, Creevy has created a modern-day, dark and disturbed interpretation of the 90s action hero, complete with bad attitude, out-the-box thinking and shouty boss. Even the dialogue serves as a reminder of that much-loved era, with lines like "I was involved the second they pulled the trigger" all said with a straight face. But given the refreshing context of this film, these clichés are not only forgivable, they're preferable. I wish all my local plods were brutal no-nonsense renegade cops. Although, for the sake of my drunken, traffic-cone-wielding teenage self, I'm grateful that they're not.

If anything, the most questionable element of Welcome To The Punch is its confusing stance on gun control. Any Hollywood-type action flick set in London should address the UK's lack of readily available firepower, and this film cleverly sets as its backdrop the debate as to whether or not our police should be armed. And yet, it doesn't seem to have decided which side of the argument to be on, seemingly saying "guns are bad" and "guns are cool" simultaneously. Plus you have to wonder how, when faced against bullet-blazing criminals, Max can just easily pick any range of pistols and semi-automatic weapons to fight them. Is it even possible in this country for a detective to do that without consequence? 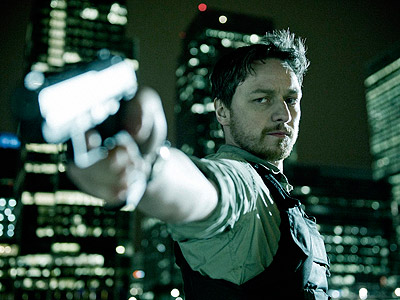 Go ahead. Make my day, good sir. What what.


Still, it is an indisputable truth that there is no such thing as 'too many guns' in a film and the fact that the introduction of more and bigger weapons can in any way be considered a niggle just goes to show how otherwise well-accomplished this film is. With stylish slow-mo shoot-outs - whether in a laser quest style empty club or around an old lady's coffee table - the movie achieves everything Creevy desired. It's every bit the kind of stylish, sexy thriller that so often travels over here from the States. And, most importantly, I can't ever remember a time that London looked this exciting. I mean, it's hard to believe its the same place that provided the setting for King Ralph.

More:  Welcome To The Punch  Eran Creevy  James McAvoy  Mark Strong  David Morrissey
Follow us on Twitter @The_Shiznit for more fun features, film reviews and occasional commentary on what the best type of crisps are.
We are using Patreon to cover our hosting fees. So please consider chucking a few digital pennies our way by clicking on this link. Thanks!