The world of rom-coms is a fickle one; for every When Harry Met Sally there's The Other Half (starring Danny Dyer, it's on Netflix) or something-or-other starring Isla Fisher tripping over a lot. Whilst it's not going to break new romantic ground, the likeable leads and overwhelming sweetness of What If won me over. God I hate myself sometimes.


I guess I'm probably obliged to shoe-horn in somewhere that What If is something like a modern-day version of When Harry Met Sally, it too asking whether men and women can ever 'just be friends' even if they fancy the pants off each other. Just like its predecessor, there's some chunky knitwear and sassy dialogue, but What If has an earnest charm all of its own and manages to pull itself back whenever things look in danger of getting a bit too whimsical. I can even forgive the silly names of the two potential fuck buddies, Wallace and Chantry, who sound less like romantic leads and more like two pugs who wear bowties on Instagram. It's all just really… nice. Now I really do hate myself.

Meets don't come any cuter than in the opening minutes when What If goes balls-out with its whimsy and heartbroken med-school dropout Wallace (boy pug Daniel Radcliffe) quietly bonds with kooky Chantry (girl pug Zoe Kazan) over some magnetic fridge poetry about love and monkeys. In the background, their mutual token-crazy friend Allan (Adam Driver) immediately pulls Nicole (Mackenzie Davis) at one of those types of parties that I always imagined I would be invited to in my twenties but never was, where everyone looks amazing in skinny jeans and there's an endless supply of Pringles.

Left behind by the free spirits who are ready to rub their genitals together within moments of meeting, Wallace and Chantry have an actual conversation and are clearly made for each other until – spoiler – Chantry drops the boyfriend bombshell and Wallace's heart is visibly torn in two. 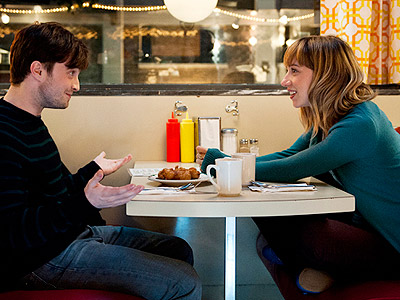 Those When Harry Met Sally comparisons are completely unfounded.


Undeterred, the two get to know each other better and we voyeuristically attend each of their platonic friend dates as they bond over conversations about Elvis' favourite snack and embarrassing moments from their past, although neither want to admit that there's anything more than friendship there. As each glance between them gradually went on for a beat too long, or a fingertip illicitly brushed over bare skin in extreme close-up, I was readying myself to reach for my metaphorical jug of liquid scorn, ready to pour it over everything until I realised I'd became distracted by Wallace and Chantry's slightly shambolic but endearing interactions. What if these two cute kids could actually find a way to work it out, I pondered? And how dare they win me over.

That's not to say there aren't any niggles: the wiseass ratatat-tat dialogue where supporting characters just say whatever is on their mind is incredibly grating, and at times the alt-cool hand-drawn animations and soaring Noah & The Whale-esque soundtrack are a little too kooky, adding a cynical dollop of charm on top of something that is already sugary sweet.

What pulls it back is the fact that, in this setting at least, the leads and their friends are hugely likeable - but only in this film universe. In real life, you'd quietly mute them on Facebook and pretend to be engrossed in Candy Crush saga if you passed them in the street. 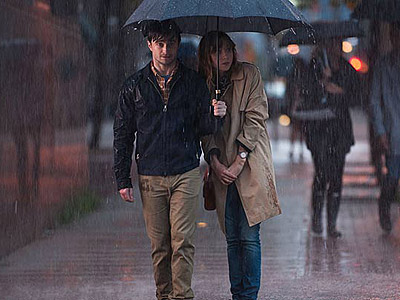 (*crosses the road into oncoming traffic*)


Kazan, who made an excellent riposte to the manic-pixie-dream-girl in Ruby Sparks plays a not-so-manic but still pixie girl, all gangly limbs, perfectly tousled hair and cute coats who has a cool job as an animator (which has international offices but only seems to make short films). Adam Driver manages to pitch the 'best friend' role perfectly, over-confident, bombastic and weird without being annoying, and has some of the standout moments of the film. The real surprise is Radcliffe, who is now able to act without tensing his jaw first, making the sometimes cloying dialogue seem perfectly natural, and he displays the right amount of heartbreak without seeming like a total sap.

The most annoying aspect however is that sometimes it's hard to know who to root for: Chantry's boyfriend Ben (Rafe Spall, being dashing as usual) isn't a cad or a horrible boyfriend so she has no real reason to leave him. Chantry herself is as guilty of leading Wallace on as much as he's guilty of letting himself think she reciprocates his feelings, and other characters change their moral stance as much as Chantry changes her lovely pea coats.

In the end, there are difficult decisions to be made and, depending on what you think about infidelity, the ending will or won't be satisfactory. While it doesn't have the laugh-out-loud scenes of When Harry Met Sally it will still manage to worm its way into your affections in that annoying, hipster type of way, much like those Instagram pugs in bowties. If you're courting, What If is one of those great third date movies, or the perfect not-so subtle way to tell your best pal you want to get into their pants. But while it won't teach you much more about love other than the perfect recipe for a deep-fried peanut butter sandwich, it will make you feel warm and fuzzy for a little while.

More:  What If  Daniel Radcliffe  Zoe Kazan  Adam Driver  Romance
Follow us on Twitter @The_Shiznit for more fun features, film reviews and occasional commentary on what the best type of crisps are.
We are using Patreon to cover our hosting fees. So please consider chucking a few digital pennies our way by clicking on this link. Thanks!