X-Men: Days Of Future Past

Have you seen all of the X-Men films? Including the First Class prequel and both Wolverine movies? AND all of the mid-credits and post-credits stings that were tagged on to the end? Good. Then you may proceed. Welcome to X-Men: Retcon. I hope you've been paying attention.


Never before has a film felt like such a celebration of its own franchise. Some sequels are all inclusive for audiences that may not have seen the first movie: "Oh, you don't know how X got that scar? Here's a quick line of dialogue to catch you up to speed". Not so here. Right from the start, Days Of Future Past moves at a breakneck speed assuming that you already know the situation and can deal with it instantly changing. It's a film for comic-book fans; those who regularly put up with with various, sometimes contradictory storylines of their favourite characters and who are used to parallel universes, alternate timelines and sudden history rewrites. It's a film that serves as a prequel, a sequel and a bridge between the two. And, most of all, it serves as a giant "fuck you" to X-Men: The Last Stand.

All of which is great news to fans, because 'celebration' is the right word here. In using the classic Days Of Future Past comic-book storyline to provide a framework for melding together the two existing slightly off-kilter X-Men worlds, this is an epic tale of time travel, butterfly effects and the overall mutant vs human war. More importantly, it is also a story with heart, exploring themes of family, friendship and faith. But don't worry, there's still shitloads of lasers and punching and stuff. 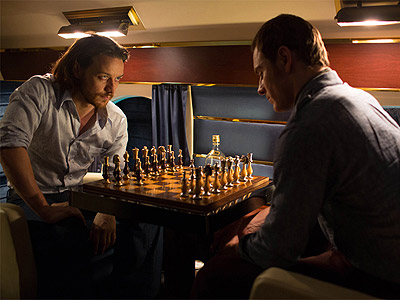 
As superhero universes get more and more ambitious with every movie, the accomplishment achieved with this meta-crossover - making room and giving appropriate weight to not one, but TWO ensemble casts - is unparalleled. And Bryan Singer knows it. Filling his film with as many fan-pleasing nods, references, cameos and continuity error corrections as stunning special effects and ingenious set-pieces, this is a movie that exists solely to connect both sets of X-Men, rather than develop any of the characters in new and interesting ways.

As such, much of the film feels like little more than fan service, and it's hard to imagine that Average Joe isn't going to leave scratching his head about some lampshaded in-joke, or under-explained development (seriously, is Professor Xavier ever going to reveal to anyone exactly how he's alive again?), but that's ok. The chances are that almost everyone seeing this film is already invested in the characters to some extent and the time-travel story that connects the sequels to the prequels is so engrossingly complex, it's worthy of the best of any standalone sci-fi film. 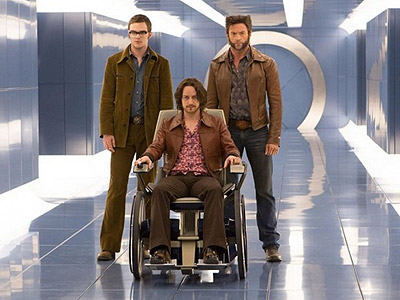 Shit, I didn't mean 'standalone', er... I meant that the time-travel element doesn't cripple the plot... oh god, I mean...


This isn't to say that there's nothing here for the layman to enjoy though. Even if you take away the usual blockbuster fodder of giant robots shooting blasts of energy and the flashy power-showboating of ice-man fighting alongside fire-man fighting alongside steel-man, etc, there are plenty of smarts in the delivery of these big battle sequences. One mutant newbie, for example, has the ability to throw transporter-portals, allowing for some well-timed strategic fighting to wrap your head around, as well as some neat visuals showing the view of both the 'entrance' and the 'exit' portal at the same time.

Outside of the action scenes, the film is obviously elevated by its talented cast. While the X-Men Of Old have little to do, the X-Men Of New shine in incredible ways, particularly James McAvoy as the broken and lonely Charles Xavier, whose heart-breaking hopelessness lends interest to even the most routine of expositional dialogue.

In contrast, Michael Fassbender gets less room to breathe, and Jennifer Lawrence, whose Mystique takes a centre stage here, feels a little wasted in the role purely because she is required to do little else than just look sullen from time to time.

The real breakout character, however, is Evan Peter's Quicksilver, an effortlessly ADHD-suffering juvenile delinquent who not only injects some mischievous humour into the pomp and self-importance of proceedings, but also stars in the funniest slow-motion sequence I can remember. It's just a shame that an already full-to-burst script results in him being written out early on in a rather off-hand manner. 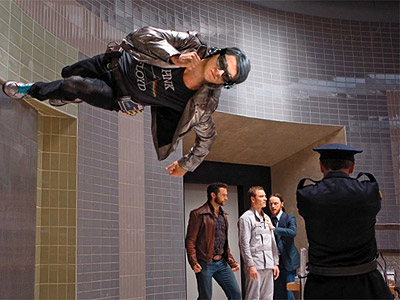 "I'm just nipping out to the shops" (*is never seen again*)


It's even more of a shame that, as the film clearly goes to painstaking lengths to wrap up all of its own loose ends, as well as most of the loose ends from every other previous X-Men movie, it falters slightly in its time-travel logic. For a good few minutes, right at the very end, this is X-Men: Days And Confused as you try to process how things have ended up the way they are, and there will be chronology niggles that will probably haunt the film for some time to come.

But then, this feels like a film that amounts to just a ballsy experiment in aligning franchises and, if the worst that comes out of that is a little debate as to interpretation, that's a remarkable feat. The upside is that we still get a film that revels in the fun and spectacle of what we already know and love about these mutants; a true celebration of the X-Men.

More:  X-Men Days Of Future Past  X-Men  Hugh Jackman  Jennifer Lawrence  James McAvoy  Michael Fassbender  Bryan Singer  Ian McKellen  Patrick Stewart
Follow us on Twitter @The_Shiznit for more fun features, film reviews and occasional commentary on what the best type of crisps are.
We are using Patreon to cover our hosting fees. So please consider chucking a few digital pennies our way by clicking on this link. Thanks!