If you think your job's difficult, try being a CIA officer on the hunt for the world's least favourite terrorist. If it's not bad enough that your quarry is probably holed up in an anonymous cave in the middle of nowhere, you can barely enjoy your lunch break without something exploding all over you and you have to be across some of the world's most baffling jargon. So next time your PC point blank refuses to communicate with the office printer, think yourself lucky you're not involved in a black bag operation at angels two zero AGL with only three mikes left before you're completely winchester.


Zero Dark Thirty wastes no time in plunging you into a world of impenetrable spy-speak and unsavoury government-sponsored torture, and while the latter immediately poses all sorts of moral and ethical questions, the former has a discombobulating effect which makes it hard to get involved for the film's first hour. It's a feat of concentration to work out what the hell anyone's on about or up to when only about 14% of any given sentence makes any sense. 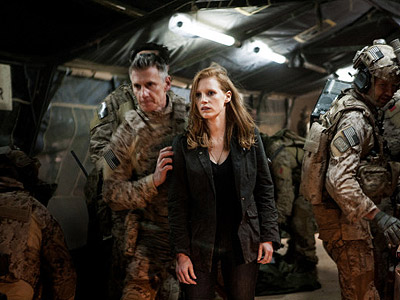 "Ma'am, you're gonna to have to parp that whiffle on the
plopmop before boffo starts gangling on the sninkle."


That said, all you really need to know is that hot shot CIA noob Maya (Jessica Chastain) has got a proper bee in her bonnet about Osama Bin Laden and absolutely WILL NOT STOP, EVER, until he is DEAD. Why she can't just bring him in for questioning goes unexplained: maybe he don't speak English too good. But she's singularly obsessed with bringing the little tinker to justice one way or another, and events that occur throughout the story skew her reasons for doing so. Is she just doing her job, or is this shit personal? Director Kathryn Bigelow isn't saying, sensibly leaving it up to you to decide whether Maya is the best person for the task.

Eventually Zero Dark Thirty settles into a comfortable groove, and the path leading to Maya's goal becomes clear to us, if not to her. Chastain is fantastic, and Bigelow surrounds her with a deliberately intimidating shit-hot supporting cast including Mark Strong as a shouty CIA man, Jason Clarke as a torture-happy CIA man, James Gandolfini as a gruff CIA man and JOHN FUCKING BARROWMAN as a camp, show tune-singing CIA man. Sadly Barrowman's big musical number must have got cut because all he really does is stand about, then get in a lift with Gandolfini (no mean feat: Tony Soprano takes up a lot of lift these days). 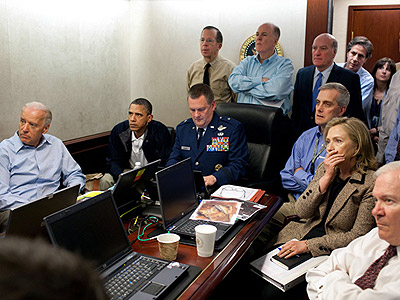 Hillary couldn't believe Barrowman was in it either.


Despite all the criticisms levelled in the media at Zero Dark Thirty for being a jingoistic party political broadcast for Barack Obama, it's actually mercifully apolitical. It's more interested in Maya's tenacity and personal struggle, and the only time we see any representatives of the White House, they're expressing understandable caution about her less-than-concrete findings. In fact as the film builds to its nerve-shredding climax, with Joel Edgerton and his magnificent beard leading a team of Navy SEALs in stealth choppers out of Area 51 (yes, really) to capture or kill Ol' Dirty Bin Laden, it moves away from anything tediously worthy and becomes all-out action flick. Chastain's part in the finale is sadly perfunctory, but we never forget that without Maya's determined pen-pushing, none of what follows would have been possible.

Bigelow does a remarkable job of keeping a story to which everyone knows the ending enthralling, and her handling of the climactic showdown is masterful. Or mistressful. Whatever. It's unclear what the Academy were thinking when they nominated Zero Dark Thirty for Best Picture but snubbed Bigelow in the Best Director category; it seems fairly obvious that the film didn't direct itself. But then that's why the Oscars are a load of old cock, while Zero Dark Thirty is quite definitely not.