How many movies make up a renaissance? Without getting too hung up on terminology, I'm interested how we categorise, rank and file nascent movies - the age of this, the era of that etc. When does a hot streak cool into something of more substance? I only ask because Zootropolis is the latest in an increasingly long line of movies from Walt Disney Animation Studios that can rightfully call itself a classic. If you start with 2010's Tangled (and discount the still rather delightful 2011 Winnie The Pooh kiddy pic), that streak also includes Wreck-It Ralph, Frozen and Big Hero 6, all movies with iconic characters, impressively progressive agendas, humour and heart. Shouldn't we be talking about this decade's body of Disney in more grandiose terms? Zootropolis represents the apex of Disney's sparkling Digital Age; a blissfully beautiful, adventurous and charismatic movie that's typical of the studio of late.


If it's starting to sound like I work for Disney, well.. That's because I do. I have no stake in the Studio Animation department however (I wish), and though I get to appreciate first-hand the artistry and craftsmanship that goes into making a movie like Zootropolis, I watched and reviewed the same movie that you saw. More important than who pays my wages in this instance is who those wages are spent on: as a parent of a three-year-old film fan in the making, if I'm going to put him in front of a screen for 90 minutes it's going to have to tick all the right boxes. My son, who is even more of a fidget than his old man, sat still in his seat for the entirety of Zootropolis (almost unheard of), laughing, gasping and clapping at all the right moments. Even if you don't trust my biased opinion, his verdict is pretty unimpeachable: "It was great! Nice, scary and funny!" Three unprompted adjectives! He's going to be a film critic!

Like Big Hero 6 before it, Zootropolis uses that big ol' Disney render ranch to create a gigantic open world as vibrant and nuanced as the characters that inhabit it. Sanfransokyo felt like it was home to a hundred stories, a city so busy and dense with data that you could spend an age on pause appreciating the detail. Zootropolis follows suit: the city is the star here, split into wildly different districts to better house the variety of beasts within. There's a desert town for the camel crew, an icy tundra for the polar populace, a rainforest district where the air feels thick with pixels and 'Little Rodentia' for the ankle-biters: it's no exaggeration to say that Zootropolis could easily play host to sequel after sequel, story after story. It is its own cinematic zooniverse. 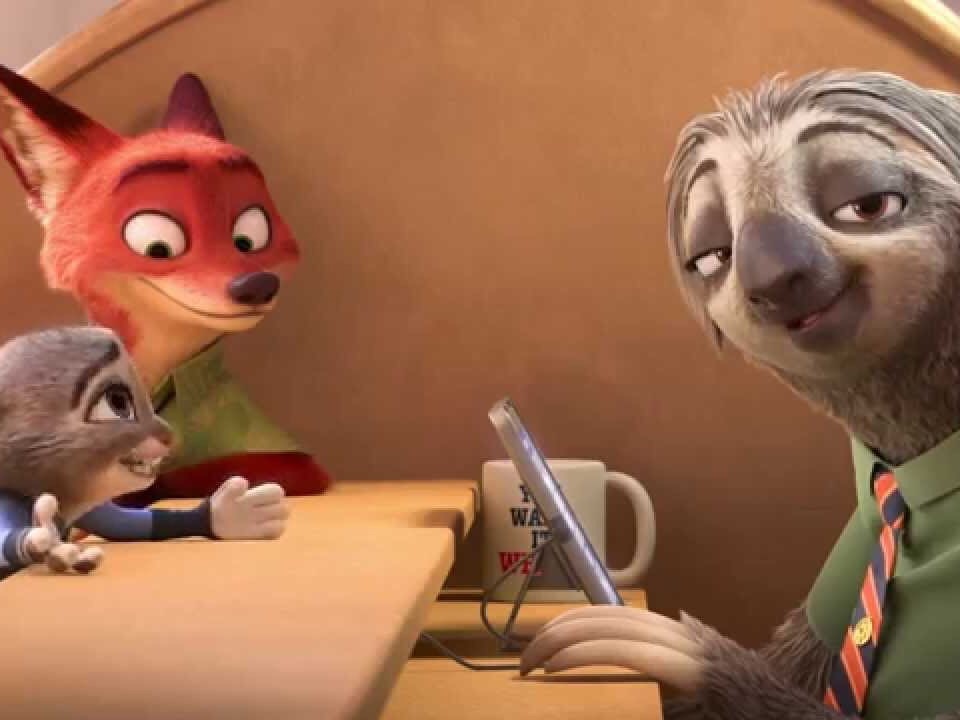 Which makes these guys The Avengers.


In many ways, Zootropolis feels like a Disney Greatest Hits compilation: every animal adventure they've ever made feels like it has informed its creation in some respect. Better yet, having multiple species mingling in the big city doesn't just make for a cute concept, it drives the story to places you wouldn't expect Disney to go: themes include cultural stereotyping, racial determinism and workplace discrimination, explored via a narrative inspired by police procedurals and film noir.

Of course, it's also just a story about a fluffy bunny who teams up with a crafty fox in order for hilarity to ensue, but even on this basic level, Zootropolis is a delight. Voice casting is impeccable (Ginnifer Goodwin is particular well suited to the role of feisty bunny Judy; ditto Jason Bateman to sly fox Nick), the sight gags are plentiful and funny (I liked the lemmings exiting their office building in single file) and the screenplay heaves with zingers. You've seen the sloth bits. You know. Zootropolis is a movie that pulls off the tricky task of satisfying kids while engaging adults.

Sound familiar? These are the kind of compliments that are usually reserved for Pixar movies. While Disney's stablemates busy themselves with a sequel per year until 2020, it's the Mouse House who are edging ahead with original and compelling stories with iconic new characters. Zootropolis directors Byron Howard, Rich Moore and Jared Bush deserve much praise for keeping the sprawling story in check, but really there's only one man who can claim credit for the success of Zootropolis and the rest of Disney's dynamic decade: John Lasseter. Under the guiding principles of the former Pixar president, Walt Disney Animation Studios have raised their game to another level: all hail Zootropolis, the glittering centerpiece in the Lasseter Age. Long may it continue.

More:  Zootropolis  Disney  Ginnifer Goodwin  Jason Bateman  Idris Elba  Animation
Follow us on Twitter @The_Shiznit for more fun features, film reviews and occasional commentary on what the best type of crisps are.
We are using Patreon to cover our hosting fees. So please consider chucking a few digital pennies our way by clicking on this link. Thanks!