Earlier this week he was bald and fat, now he's a vampire - that Farrell is just so waffly versatile!

Not much is given away in this first Fright Night trailer, other than the fact that Farrell's vampire has a fondness for tight muscle tees, riding motorcycles and nightclubs playing pounding techno music, and that schoolboy next door Charley (Anton Yelchin, age 22) doesn't much care for his lifestyle. I think this might be a metaphor for something.

Apart from a half-second glimpse, there's no sign of David Tennant's flamboyant stage magician-slash-vampire killer, an inclusion which might have raised my interests to (*indifferent shrug*). As it is, I'm sticking with (*bored eye-roll*) for now.

Even the poster, below, is uninspired. Ooh, a giant floating head? You guys really put your job on the line with this one. It doesn't matter how looming and menacing you make your antagonist; if your hero looks like he'd slot quite nicely up your villain's nostril, something's gone awry. 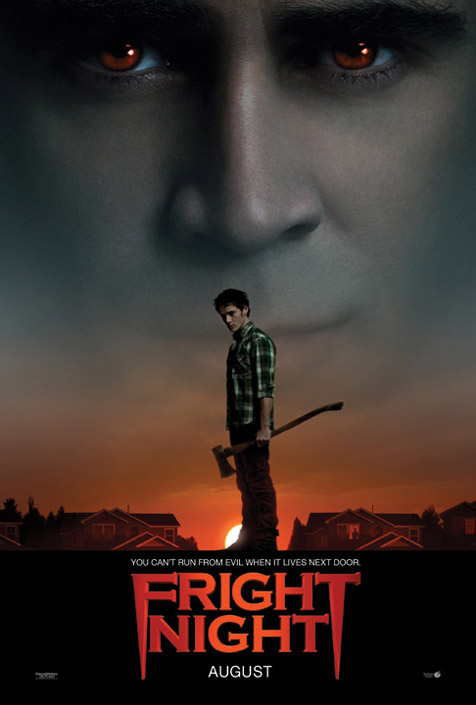 I prefer this version.
More:  Fright Night  Colin Farrell  David Tennant  Anton Yelchin  Imogen Poots  Toni Collette
Follow us on Twitter @The_Shiznit for more fun features, film reviews and occasional commentary on what the best type of crisps are.
We are using Patreon to cover our hosting fees. So please consider chucking a few digital pennies our way by clicking on this link. Thanks!