Famed indie auteur Steven Soderbergh must have got tired of thinking outside the box and fighting the system, because he's directed an action movie starring a female MMA fighter. I can't decide whether it looks amazing or like something Steven Seagal would pass on.


Here's a curio: the trailer for Steven Soderbergh's Haywire, starring mixed martial arts star Gina Carano. If you didn't know it was a Soderbergh film and you watched the trailer, you might think it was, what, a Renny Harlin film? Maybe a Luc Besson production? Was Liam Neeson unavailable? It's hard to believe the speccy nerd director of sex lies and videotape even exists in the same universe as the Voiceover Man.

You see what I mean? Haywire appears to be the most clichéd kind of action film, with a weaponised hero hunted down by the government forces that trained them. This is Van Damme territory for sure. But then you see faces like Michael Fassbender, Ewan McGregor, Antonio Banderas and Michael Douglas in the cast, and then suddenly it looks halfway respectable. Then Gina Carana kicks someone through a window and Seagalises it once more.

This is messing with my brain almost as much as that time I dreamed that John Malkovich, Frances McDormand and John Turturro starred in a movie about giant alien robots that turned into cars. 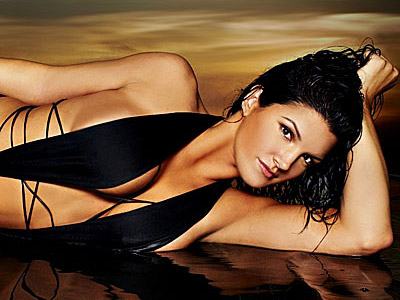 Either this is Gina Carano, or that one from Blue Peter has been in the gym.
More:  Haywire  Steven Soderbergh  Gina Carano  Ewan McGregor  Michael Douglas  Channing Tatum  Antonio Banderas
Follow us on Twitter @The_Shiznit for more fun features, film reviews and occasional commentary on what the best type of crisps are.
We are using Patreon to cover our hosting fees. So please consider chucking a few digital pennies our way by clicking on this link. Thanks!