Time is money, or something

Here's an extended trailer for In Time, a baffling sci-fi in which (*adopts Voiceover Man gravitas*) time is Earth's new currency. If you say so, Justin Timberlake!


There's a pressure to instantly get behind any new high concept sci-fi these days, as if anything that's based on 'an original idea' must be championed to high heaven, regardless of its quality - otherwise 'Hollywood' will continue to churn out sequel after sequel after sequel (which everyone pays to go see anyway). Once you hear the concept of In Time, however, you might start to agree with people who say that Hollywood is out of ideas - good ones, at least.

Don't let me taint your opinionoids before they've hatched - watch the trailer and I'll see you down there (*points*) in a bit.


Fair enough, this is indeed an 'original' idea. I've certainly never seen a sci-fi before in which humanity has cured the ageing process and figured out how to 'monetise' time by putting digital 'expiration clocks' in every single human being on Earth, in order to reward hard work with a longer lifespan.

There's probably a reason for that.

Seriously, there are high concept movies and then there are high concept movies - this could have only been written as the result of a bong session. "Dude... what if, like... we stopped, like, ageing... and then the government suits all put clocks in our arms to force us to go to work, or we'd die. It's, like, a metaphor for... something." (*giggles uncontrollably*). Seriously, time is money? It's like a tagline from a direct-to-DVD Timecop sequel. 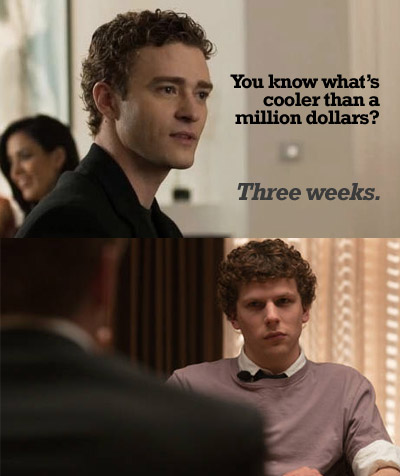 In Time is set in 'the late 21st century'. So, in Andrew Niccol's timeline, humanity has around 90 years to tear up everything we know about biology, rewire the DNA of every human being on Earth to run on 'time' (however the fuck that would work) and have the government convince everyone this is a great idea. I'm not buying it.

At best, in the late 21st century we might have cured the common cold. We might even have invented a Windows operating system that doesn't suck. And besides, everyone knows human timeclocks won't be viable until the 24th century. Duh.

I won't bash a movie I don't yet fully understand (apart from, oh hey, I already did) so I'll give it the benefit of the doubt for now. But if you think Justin Timberlake being earnest and Amanda Seyfried in a hooker's wig is going to distract me from your highly nonsensical plot, then think again, fictional Hollywood executive in my head.

More:  In Time  Justin Timberlake  Amanda Seyfried  Alex Pettyfer  Andrew Niccol
Follow us on Twitter @The_Shiznit for more fun features, film reviews and occasional commentary on what the best type of crisps are.
We are using Patreon to cover our hosting fees. So please consider chucking a few digital pennies our way by clicking on this link. Thanks!