A trailer for an HBO film in which Michael Douglas and Matt Damon play Liberace and his boyfriend, exposed to the reasoned comments of the YouTube community. What could possibly go wrong?


Hot on the heels of their biopic of Al Pacino's hair comes Behind the Candelabra, which HBO snapped up from Steven Soderbergh after Hollywood rejected it as "too gay".

Ha! "Too gay." As a broad-minded London sophisticate I have personally spoken to over three people I knew at the time to be gay, and to one who later turned out to be. I prefer not to talk about that one. Even so, nothing is too gay for me. Bring the gay, I say.

Yeah, OK, that is pretty gay. But if there's one place a film like this is sure to find acceptance, it's in the broad church of those who leave their thoughts below YouTube videos. In this case, I found their comments to be divisible into the following seven categories.
The confused

lacatro 1 day ago
When I﻿ was little I had no idea about gay people. And Liberace? Never knew it until I was older. Weird, huh?

Phil S 1 day ago
Wtf is this movie﻿ even about?

maxcohen13 1 day ago
So Hollywood is going to mark Liberace's life as a cartoon-like perversion﻿ so that people can peek in and point at. It appears they are completely disregarding the one thing that he was known for, his genius piano abilities.
This is ridiculous. Expected from Hollywood scum, but still ridiculous.

Fosha13 1 day ago
So it looks as if the Michael Douglas character has a giant﻿ organ, and he hires the Matt Damon character to help push in his stool. Is this some sort of tribute to NBC? 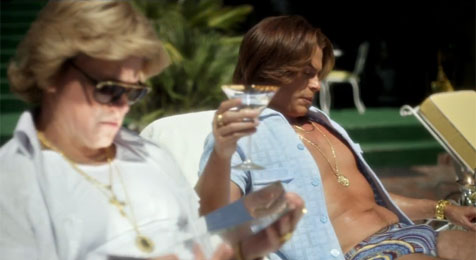 JordanjamesX 1 day ago
Wow Rob Lowe﻿ has a huge erection around the 39 second mark!

InfoYouNeed 1 day ago
maybe his cock is﻿ just big?
The gay conspiracy theorists

(It's the conspiracy that's gay, not the theorists. They'd want me to make that clear.)

vicarioustube 2 hours ago
People travel to Paris to see the T&A at the Follie Bergeres or the Lido﻿ and many went to Las Vegas just to see and hear Liberace even many voted GOP in real life. It shows how success can built although the majority will want to look away or even point the finger. But hey it's sin city so anyone you look up to or pay for is OK. I can't wait to see these not so two controversial actors. I am sure to get where they are today they both dabbled like most the gayness of the movie industry.

Detroit Red 19 hours ago
70% of Hollywood men are homo. Will Smith Tom Cruise Marlon Brando named his son after his lover. Hollywood is﻿ founded by witches and Scientologist. They worship Alister Crowley.
The actually-quite-funny

rivercmb 16 minutes ago
Gay: The Movie﻿

Paleo San 22 hours ago
Matt﻿ should have been with Ben in this movie ;) It would be way more sizzling.
The enthusiasts 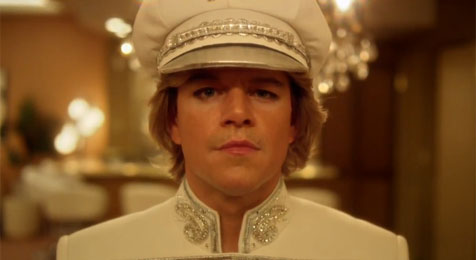 Newtonsq 45 minutes ago
That's it. I'm coming back as a gay man in my next life. Nothing more sick than 2 pretty muthafuckas﻿ dating each other. Gotta see this movie.

markie polo 1 day ago
Matt can﻿ sit on my face anytime!

Jef D. 1 day ago
i can't wait to﻿ see and review this one. Two good actors stepping out of there comfort zones to play these roles; especially Mr. Douglas because he himself probably doesn't really play a lick of piano.
The guy who ruined it

Leaving aside the possibly unintended irony of quoting Abba, this guy might be the first YouTube commenter in history to actually have a point.

Bigman240 1 day ago
Couldn't they find GAY actors? But of course, having famous actors will attract a much wider public...money money money...﻿
But wait: order is soon restored.

erago54321 17 hours ago
you are so mislead and fucking stupid,﻿ holy shit.

More:  Behind The Candelabra  Michael Douglas  Matt Damon  Rob Lowe  HBO
Follow us on Twitter @The_Shiznit for more fun features, film reviews and occasional commentary on what the best type of crisps are.
We are using Patreon to cover our hosting fees. So please consider chucking a few digital pennies our way by clicking on this link. Thanks!